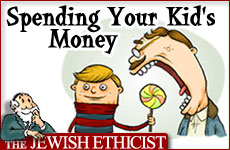 Gifts to children should be used only for their benefit.

Q. Relatives gave us presents for our new baby son. Some told us to put the money in a savings account for him, but we could really use the money right now.

A. Jewish law, like secular law, recognizes strict limits on the property rights of minor children. For example, the mishna states that if a young child finds a lost object, the object belongs not to the child but to the parent. The Talmud explains that the reason is that the parents should not resent the child's enrichment, at the same time that they are called upon to endure great expenses for his upbringing. (1) The commentators add that the same reasoning applies to gifts – normally, gifts given to children pass to the ownership of the parents, as long as the parent is the one supporting the child. (2)

It follows that if the family members mentioned the bank account as a mere recommendation and not as a stipulation, you may use the money for household needs.

However, the possibility also exists that the idea of putting the money in a bank account was an actual stipulation of the giver. Of course infants don't have bank accounts, but the idea would be to put the money in trust for the youngster, with you the parent as trustee. Jewish law equally recognizes the idea of a trustee for the assets of minor children; usually this is necessary if the parent is deceased, missing or incompetent, but there is no fundamental reason a parent can't be a trustee also. If indeed there was a stipulation, then the money doesn't belong to you.

However, even in this case there is some flexibility. A trustee for a minor child is bidden to disburse the money in the best interests of the child. Sometimes this even means spending money on the trustee; for example, the Talmud teaches that if the trustee needs to buy nice clothes in order to make a good impression on others when he is negotiating the interests of his charges, he can take the money from the trust. (3)

So if you "could really use money right now", as you say, for basic household expenses that are needed for the child as well, this should be acceptable even if the giver stipulated that the money should be in trust for the child.

It seems to me that whether the savings account idea was an actual stipulation or just a suggestion, the course of action should be the same. Ideally the money should be saved for the child, but if it is needed for vital household expenses that benefit the child, then the amount taken from the gift should be carefully recorded so that it may be returned to the child's name if and when the household financial situation stabilizes.

It would be ideal of course to get the explicit permission of the giver, but it may be quite awkward at times to second-guess gifts, not to mention revealing to strangers that your budgetary situation is strained.

Getting Your Dream Job

Sub-Prime Meltdown
Olivia Newton John’s Grandfather was a Nobel-Prize Winning Jewish Physicist
Don’t Believe in Other Gods Versus God is One
Seeing Without Eyes
Comments
MOST POPULAR IN Current Issues
Our privacy policy
Aish.com Is Looking for Great Writers