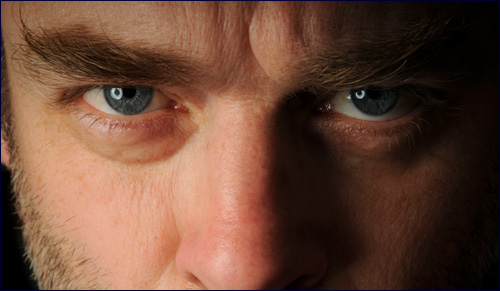 What drove this tortured soul to seek out a Jewish psychologist?

He was not an imposing man, short, tidily groomed. I did not sense anything intimidating about him as he faced me in the office. But his eyes were striking – cold, metallic grey, locked upon mine with an unwavering gaze as he spit out his reason for making the appointment.

His wife had become paralyzed following an accident and could not speak, move or respond to anyone. She lay in bed, staring. No communication, no relationship. His reason for seeing me? “Because all of my friends say I should just dump her and move on, but in my heart I needed to ask a… Jew-doctor.”

He said it casually without a smirk or taunt. He went on.

“I might as well tell you that you may have a hard time working with me. I am a member of the American Nazi Party. I have also been a Klansman.” This was said without a sinister air, with no sense of menace. He wanted me to know from the start that I might I feel uneasy working with someone who, well, considered me a “Jew-doctor.”

I detest the Jews as a group… but that’s not to say that I don’t recognize that some of you people are good at what you do.

I was prepared to offer him respectful support. But, within my mind, I was eager to learn why his heart had prompted him to seek out a Jewish psychologist. “I want you to know doctor that I detest the Jews as a group, just like I oppose all other aliens who don’t belong in our country. But that’s not to say that I don’t recognize that some of you people are good at what you do. You make good accountants. You are great lawyers, doctors too. What I want from you is to tell me what you people would do if you were in my shoes.”

I still did not get it. This man was a racist, detested “my people”, but chose me to find out what a Jew would do if faced with his predicament. How could I possibly prescribe to him “the Jewish solution” if this man would have been content with “the Final Solution”? How would it matter to him if a solitary (Jewish) opinion might conflict with the recommendation of his bigoted peers who advised him to leave his non-functioning wife? Was this a matter of him needing to appease his soul, doing due diligence by seeking a second opinion from me, or was this a matter of conscience, if indeed he had one? He had already shared with me some of the criminal activities which he had been part of in his vigilante escapades. Was he having pangs of guilt, but only about deserting his wife of many years? Was it love that kept him bound to her, or was there some deeper dynamic banging at the basement door of his mind?

As the weeks went by, he began to loosen up. He had begun to trust me enough to share his emotional torment, in small pieces. The cold stare was still very present, but so were the occasional tear drops which dampened those steely eyes.

His marriage was once good. She was a stable kind woman, seldom questioning him about his political views or pressing for details about his under-the-radar dealings. They had a love, clearly, and he appreciated her. Now she was confined to permanent bed-rest to live out her years, unresponsive forever. Should he stick with her, resigned to eternal loneliness, or respect his needs as a man and “cut his losses” and find another wife? His dilemma was a psychological one that had some moral undertones.

One day, he referenced her accident. It was a nonchalant remark, yet the first mention of the catalyst for his psychological struggles. “You see, doc, my wife’s accident may not have been a true accident.” I looked at him, stayed quiet, but with the most sincerely patient visage I could muster. He continued. “We had a little fight that day and she left in a huff. She sped off in the car and was probably careless because she was crying and mad at me.”

Guilt can do magnificent things to the mind. It can bring a person to his knees with regret, and it can propel a person into emotional and existential agony. The fights and arguments which we have with our dear ones, especially when followed by tragedy, can lock us into spasms of remorse and self-blame. Was he staying with her for penance, serving a life sentence with the woman he had fought with, which had led her to this living death?

The man went on, divulging a blend of woeful pain over what had become of his wife, but with sparks of anger at her. I gently pushed him to look at the sadness along with that hostility. He seemed to be hurting, yet was also resentful of his wife. We are all at time saddened by another’s hardships, yet vaguely aware that their predicament makes our own lives difficult. It is a hard tug of war between staying compassionate while also feeling anger when our own happiness is compromised by their inability to care for us.

She told me that she had been hiding something from me for 30 years.

“It was that last talk we had, before she took off in the car. “ This time, the moist eyes had turned to sobbing, tears lining his taught cheeks. The angry grimace still grasped his face, but he was crying. “She told me… that she had been hiding something from me for 30 years. My wife… came from a Jew mother.” He wept openly now, sad, bitter and yet there was something else going on. “That was the worst shame anyone could cause me. And I told her that. Then she ran out to her car.”

“When I heard she was in that car crash, part of me was sorrowful, but part of me felt she had it coming. She had lied to me all along. How did I ever get stuck with a Jew for a wife? Such shame she caused me. I hoped she would die then and there, but she didn’t.”

He breathed in deeply, seeming to loosen up and melt into the chair. Then he looked at me with pleading eyes, as if begging to share a conspiratorial wish. In a soft whisper, he said, “So since my wife survived, she deserves for me to do what a Jew would do for a Jew. And that’s why I knew that I needed to get me a Jew-doctor. Can you help me, now, doc? Please can you help me?”

Sometimes, the twists and turns of a tortured conscience lead to the gateways of the soul.

A Russian Doll and an Unlikely Legacy of Kindness

Thank You for Assateague Island

Me and the Moai: What Was I Doing on a Remote Polynesian Island?
Were Adam and Eve Jewish?
How I Learned to Love the Multiverse
10 Big Jewish Inventions
Comments