The Kyle Scheele Meale: Changing the World through TikTok, Cardboard and a Dream 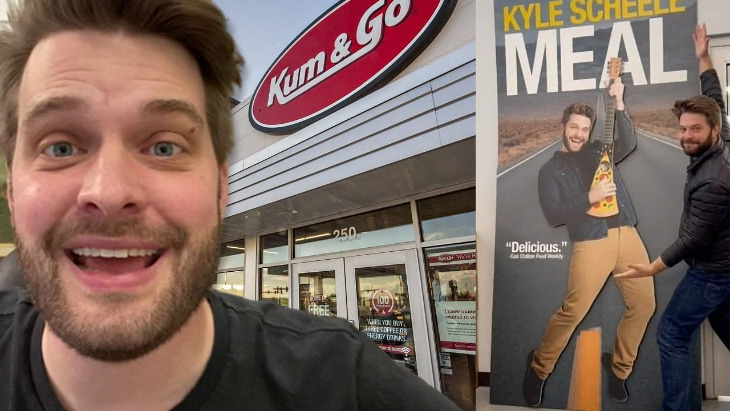 The clever viral campaign shows the power of irrepressible creativity, taking initiative, and doing good for others, with a dash of marketing genius.

When most of us walk into a gas station, we get chips, Slurpees, scratch-offs, or whatever else, pay for the gas, and get out of there. Kyle Scheele’s not exactly most people.

Scheele (whose last name rhymes with wheelie), is a motivational speaker and writer who recently went viral on TikTok when he shot, printed, and put up a cardboard cutout of himself at a Kum & Go gas station, advertising the Kyle Scheele Meal (there was no such thing as the Kyle Scheele Meal). In the very large cutout (“I made my part life-size, and I guess I didn’t think through the fact that I’m kind of tall already”), Scheele poses with a pizza guitar (a guitar with a body that looks like a pizza), joyfully strumming, most likely in celebration of the previously mentioned Kyle Scheele Meal. “Delicious,” says a fake quote from the fake periodical Gas Station Food Weekly.

Watch the video below:

Well, it happened. Kum & Go officially announced the Kyle Scheele Meale (“Which I’m ashamed to say I should’ve thought of in the first place,” Scheele said about the new name and its added rhyme), which includes a pizza sandwich (it’s just two pizzas, smushed together to make a sandwich) and a Red Bull. In a TikTok, Scheele announced that Red Bull and Kum & Go would each donate $2 per Meale sold to the charitable campaign No Kid Hungry.

Scheele’s whole thing is about going for it on weird ideas. He’s made a centaur bike, a fake marathon for non-runners, and disappointing gifts for his father that have gone viral, too. In an interview with AdWeek, Kum & Go’s director of brand marketing admitted that the Kyle Scheele Meale was a planned advertising scheme from the beginning, which shows what makes a story like Scheele’s so compelling to watch online.

Shoot your shot, man. You have not because you ask not.

When we watch somebody like Scheele do what he does, we ask ourselves, how could he do that? We wonder how somebody could have the courage/time/effort to step outside of the day-to-day and bring a little wonder into the world. He is the embodiment of Hillel’s teaching in Ethics of Our Fathers, a Mishnaic text of insights from Jewish thought leaders of over 1,000 years ago, “In a place where there are no leaders, strive to become one.” If nobody else will be bold enough to do something, it’s up to you to do it. Or, in Scheele’s words, “Shoot your shot, man. You have not because you ask not.”

Even if Scheele’s Meale saga was phony, the reactions and groundswell of support weren’t. People want to believe in earnestly doing something to make the world a more magical place. It’s how the phrase “internet, do your thing” became so popular – it’s exciting to watch something come to life when that thing felt like it could never, ever happen. Imagine having the boldness to try something like this, where you “Don’t say no for the other person” (a quote Scheele attributes to a friend), and instead try doing something ridiculous without asking for permission.

Scheele wouldn’t have been in the position to spearhead a bold campaign like his if he hadn’t already had a history of being purposely ridiculous on the internet. Getting noticed and recruited takes work. No matter how much advertising money was spent on a campaign like the Scheele Meale, genuine enthusiasm has to be earned, not bought. “Earning that level of engagement on TikTok is hardly easy, nor is there a strict formula that can predict a campaign’s success or failure,” wrote AdWeek about the video that has gained over 4 million likes and 20 million views.

If you want to do something crazy, do something crazy. Don’t wait for someone else to do it. The world is a more magical place when people step out of the day-to-day and bring a little of their own magic into it.

Seven Ways You Can Help Israel