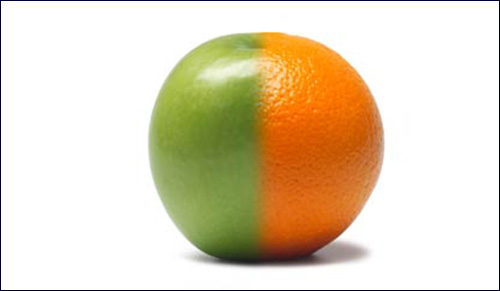 The growing rift within the Jewish people is making it almost impossible to discuss the issue of intermarriage.

Debbie Wasserman Schultz, head of the Democratic National Committee, got into a lot of hot water last week, when a copy of a speech she gave to a Florida branch of the Jewish Federation went public. She had to retract her words in order to calm things down.

What were the offending statements she said to the predominantly Jewish audience? Here’s the most controversial quote:

The politician, not wanting to offend non-Jews or Jews who do not share her views, was forced to backtrack. She issued the following statement:

"At an annual Jewish community event in my congressional district, I spoke about my personal connection to Judaism and in a larger context about the loss of Jewish identity and the importance of connecting younger generations to the institutions and values that make up our community. I do not oppose intermarriage; in fact, members of my family, including my husband, are a product of it."

Her party affiliation is irrelevant here; it's not hard to imagine a Republican figure issuing a similar retraction. Outside of Orthodox circles you cannot come out and say that intermarriage and assimilation is a problem. It has become a taboo subject. In a not so distant past, stopping intermarriage and assimilation was the rallying cry used to garner support for Jewish outreach initiatives. Federations used the term “Jewish continuity,” to imply that the Jewish people have something of unique value worthy of preserving. Today it is likely you'll be attacked for bigotry and racism and that rallying cry will more likely push Jews away.

When the topic of assimilation came up in a discussion I had with a group of Jewish college students on an Aish birthright program, a student from Nashville argued for the merits of assimilating and removing religious labels altogether. Even Aish.com, whose mission is to strengthen Jewish affiliation and commitment by inspiring Jews across the spectrum with the relevance and beauty of Jewish wisdom, has to think twice about posting an article that discusses intermarriage. No matter how sensitively written or reasonable the article is, it is very likely to be attacked by the people we most want to reach. Like a few other volatile, politically incorrect topics, are we doing more harm than good by discussing the issue on our website?

On the other hand, the Orthodox are thriving. 83% of Orthodox Jews stay Orthodox. The birthrate among Orthodox Jews is significantly higher than most other religious groups (4.1 children per adult). Sarah Bunin Benor, a professor of Jewish studies at the Hebrew Union College-Jewish Institute of Religion, said "Orthodox Jews will eventually likely be the majority of American Jews.” 60% of Jewish children in the New York City area live in Orthodox homes and that number will only increase. Included in the 10 most popular names for girls in New York City are: Esther, Sarah, Leah, Rachel, Chaya and Chana. The name Moshe is the fourth most popular name for boys.

The numbers show a growing rift within the Jewish people. As non-Orthodox Jews increasingly intermarry and assimilate, and dwindle in numbers, the Orthodox are growing significantly and marrying within the faith. Debbie Wasserman Schultz's statement about "the problem" of assimilation and intermarriage and her subsequent retraction stating she does not oppose intermarriage serves as a Rorschach test that reveals which side of the divide you are on.

It is very frustrating and sad that the very real problem of intermarriage is becoming an untouchable topic on our site. As the rift grows it will get increasingly difficult to reach out and engage unaffiliated Jews. The only solution is to show Jews, like the student from Nashville who extolled the virtues of assimilation, that the Jewish people have a unique, empowering mission to perfect the world with Jewish values and wisdom that have changed the moral landscape of human history. Being Jewish is so much more than bagels and lox; it is a great gift and responsibility, something to embrace, nurture, protect and celebrate. It is a meaningful inheritance you want to ensure is passed down to the next generation of Jews.

Reaching the millions of Jews who lack this appreciation of being Jewish is not the sole responsibility of Jewish outreach professionals. There simply are not enough of them to get the job done. It is up to every single Jew who loves being Jewish to share their passion and wisdom about Judaism with their Jewish neighbors, relatives and co-workers. You do not need to be a rabbi. You just have to care and share whatever you do know. Open your home, send an aish.com article of video that touched you, be a good role model – just engage Jews around you. If we all make an effort, together we can bridge the gap and open up lines of communication.