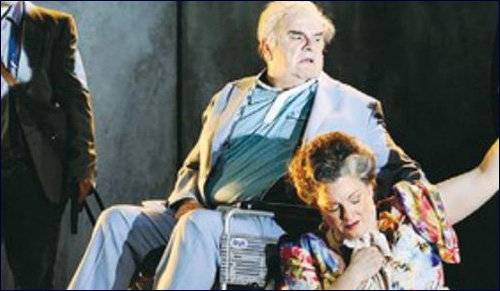 It is a disgrace that The New York Metropolitan Opera insists on performing this offensive, anti-Semitic work.

Lisa Klinghoffer and her sister Ilsa, like the rest of the world, had been glued to the news all that horrible, tense week nearly thirty years ago. “When our mother finally reached us, she struggled with having to tell us the news. But we already knew. Then she said ‘your father was a hero…. Do your crying now girls, I have done mine…. Because when I get home, we have a lot of work to do.’”

On October 5, 1985, Palestinian terrorists boarded the Italian cruise ship the Achille Lauro, separated British and American passengers, then paid close attention to the Jewish-looking passengers in this English-speaking group. Among those selected were Leon and Marilyn Klinghoffer, who were taking a once-in-a-lifetime cruise to celebrate their 36th wedding anniversary. With them were several of their close friends; they vacationed together each summer on the New Jersey Shore.

The hijackers demanded the ship divert to Syria. When authorities there refused to allow it entry, the terrorists turned on Leon Klinghoffer. He was an easy target: a sickly 69 year who’d suffered two strokes and was confined to a wheelchair. The hijackers shot him point blank in the head, then flung his body, still in its wheelchair, into the sea.

The gruesome murder shocked the world. In England, the director Peter Sellars suggested commissioning an opera on the event. He turned to John Adams, a famous American composer, to convert the ghastly terror attack to music. Alice Goodman, an American Jew living in England, was commissioned to write the libretto, the opera’s lyrics.

One of John Adams’ goals, he later explained, was to teach Americans to look at terrorism in a whole new way. Americans, he felt, were so “desensitized by years of consuming the television news… they can’t imagine a representation of a story like the Klinghoffer event being anything other than a cliché melodrama with ‘evil’ terrorists and ‘innocent’ victims.” He hoped his new opera would fix that, teaching simplistic Americans to view terrorists as something other than “evil” or negative.

Adams and Alice Goodman decided on an opera that included Biblical stories, positioning the terrorism of the PLO against innocent Israelis and Jews as the continuation of epic struggles between good and evil through the ages. It was Goodman’s idea to include choruses of Palestinians, explaining their motives in a musical move that echoes Bach’s Passions, putting PLO members in the same position that Bach placed religious figures.

“I had no idea that the feelings would be that deeply personal,” says John Adams of reactions to his work. He originally wanted to tackle the opera in a humorous way, he said, but ultimately toned down the comic elements. Alice Goodman did push to include one “comic” scene, portraying the Klinghoffer’s friends and neighbor as grotesque buffoons when they hear of his murder, conforming to age-old anti-Semitic stereotypes. Ms. Goodman, who assured Adams that this was an accurate representation of American Jews, seems to have been going through a difficult time: midway through writing The Death of Klinghoffer, she converted to Christianity; today, she is a Church of England vicar.

It perverts the terrorist murder of our father and attempts to rationalize, legitimize and explain it.

When the opera debuted in Brussels in 1991, that scene in particular was excoriated as horribly anti-Semitic – even John Adams has acknowledged is seemed to make fun of American Jews and, by extension, the Klinghoffer family itself – and quickly erased from future productions. But more fundamental concerns remained. The opera opens with a disturbing, fabricated scene: a traumatized Arab girl is watching as Jews shoot, beat and chase Arab women and children from their homes, which sets the tone of moral equivalence that mars the opera. Jews are depicted as cheating the poor, despoiling virgins, breaking the law, and exploiting others for their own gain. Terrorists who murdered a helpless elderly Jew are portrayed as nuanced, even noble at times. At one point, PLO terrorists sing, “We are soldiers fighting a war, we are not criminals, we are not vandals, we are men of ideals.”

When Ilsa and Lisa Klinghoffer watched the opera’s American premier, they called it “appalling,” explaining it “perverts the terrorist murder of our father and attempts to rationalize, legitimize and explain it.”

Although Peter Sellars, the commissioning director, said he was disappointed the opera wasn’t even more pro-Palestinian and anti-Jewish, opera companies around the world recognized it as an unbalanced, irresponsible work, and quickly backed away from the piece. After its 1991 performances, The Death of Klinghoffer wasn’t performed again for the next ten years. In 2001, it enjoyed a modest revival; it was performed in Finland, and the Boston Symphony Orchestra planned to perform extracts at a concert later that year. But after the September 11 terror attacks, the Boston Symphony dropped the piece. A member of the chorus had lost her husband in the World Trade Center, the Orchestra explained, and the group felt it was impossible to ask her to participate in a work that rationalized terrorism.

That The Death of Klinghoffer is considered too extreme to perform makes the Metropolitan Opera of New York’s decision to include it in its upcoming season all the more puzzling. The Met’s Director, Peter Gelb, acknowledges the goal of the opera is “to understand the hijackers and their motivations, and to look for humanity in the terrorists” as well as their victims, and has even acknowledged that doing so can legitimize Jew-hatred.

In addition to its live performances, the Met was planning to offer simulcasts in European cities. When the summer of 2014 saw huge displays in anti-Semitism flare throughout Europe, however, – four murdered in a Brussels Jewish museum, hundreds trapped in a Parisian synagogue by a violent mob, Jews openly beaten on the streets of Germany, and refused treatment from doctors and service in restaurants – the Met recognized conceded the opera might “stir up anti-Israel sentiments” and be “a vehicle to promote anti-Semitism,” and cancelled the broadcasts.

The Met has no obligation to give a stage to justifications of terror.

The live performances, as of now, are scheduled to go ahead. Many have defended the Met’s decision to put on the opera as one of freedom of speech. The New York Times spoke for many when it declared the opera “moving and nuanced in imagining a tragedy that gives voice to all sides.” Yet freedom of speech is not absolute; the Met has no obligation to give a stage to justifications of terror. Imagine an opera rationalizing lynching in the Jim Crow south. It is hard to picture serious artists who would give voice to such a nauseating and unacceptable point of view.

When the Klinghoffers lost their father and husband, they leapt into action, channeling their energies to fight terrorism and raise the awareness of the threat of anti-Jewish hatred. “In the face of evil, in the aftermath of hate and terrorism our family’s mission became clear… We were going to do whatever we could to put a human face to the deadly reality of terrorism. Within months, we (founded)… the Leon and Marilyn Klinghoffer Memorial Foundation – which was created by our late mother, and remains an essential part of our life’s work today,” Ilsa Klinghoffer explains.

We can all learn from the Klinghoffer’s example and channel our concern into action. On Monday, September 22, a broad coalition of Jewish groups is protesting the Met’s decision to stage the opera, assembling at their headquarters in New York’s Lincoln Center. For those who are unable to attend, Peter Gelb, the Met Director, can be reached at Lincoln Center Plaza, New York, NY 10023, and at telephone (212) 362-6000. Let him know what you think. It could make a difference.

The Missing Piece
It Takes A Lot Of Faith To Be An Atheist
How Instagram Brought Back This Nostalgic Soup
What Makes Eli Run?
Comments
MOST POPULAR IN Israel
Our privacy policy