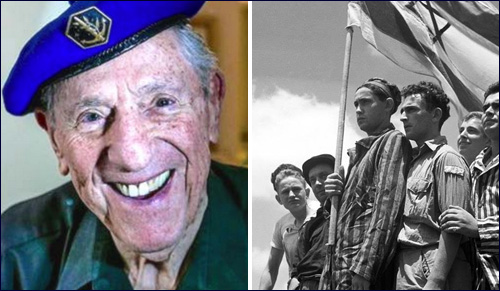 The true story of the secret operation to ferry thousands of desperate Holocaust survivors to Israel.

In 1947 Paul Kaye was asked to be part of top-secret mission to smuggle Holocaust survivors into pre-state Israel. He was warned that if he was caught he could be hanged. Paul didn’t hesitate: “Let’s go!”

In an Aish.com exclusive interview, Paul recalled how he managed to accomplish the seemingly impossible: to secretly smuggle, ship after ship, traumatized Jewish refugees to the Land of Israel. These clandestine voyages were part of Aliyah Bet which saw over 100,000 desperate Jews try to flee to pre-state Israel in the years leading up to 1948. 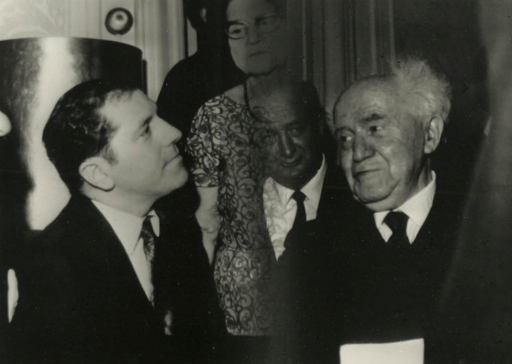 In 1947, Paul was a 20-year-old US Navy veteran. He’d volunteered to fight in World War II when he was only 17 and served briefly in the Pacific Theater as a marine engineer before the war ended. Afterwards, he returned home to New York and was living with his sister in an apartment in the Bronx.

Those who organized and sailed these boats faced prison or death.

Unbeknownst to him, Israel’s underground fighting force, the Haganah, the precursor to Israel’s army, was working to find people to help sail refitted ships from Europe to British-ruled Palestine. Thousands of Jewish Holocaust survivors were living in camps in Europe, housed in impersonal centers years after the war. Though most of these broken survivors longed to reach the Jewish homeland, Britain refused to allow these Jews in. The Haganah organized a series of daring escapes, buying and refitting scores of old ships that were often barely seaworthy. If British forces caught these secret ships, they interned the passengers once more in DP camps on the island of Cyprus. Those who organized and sailed these boats faced prison or death.

One of these Haganah organizers called Paul. “Hello, Paul Kaminetzky?” said an unknown voice on the line, using Paul’s original family name. “We’d like to know if you want to help your people.” 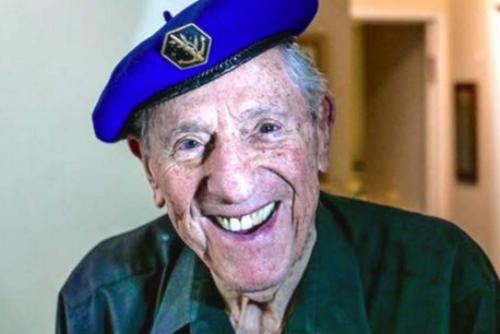 Paul was told to go to the corner of 39th and Lexington Ave. at a certain time the next day and to follow a man with a leather jacket holding a newspaper. If the man were to suddenly throw away his newspaper, it means they were spotted and Paul was to return home. The caller abruptly hung up.

All went according to plan and Paul was led to a secure location where a daring proposition was put to him: would he help sail boats between Cyprus and Palestine? The overloaded vessels would be sitting ducks in the Mediterranean, easy prey for British forces if they were found. Those organizing the voyages faced possible execution. Paul didn’t flinch. To this day, members of his synagogue say to him with a grin, “Let’s go!” in memory of that fateful day when he was recruited into the Haganah. 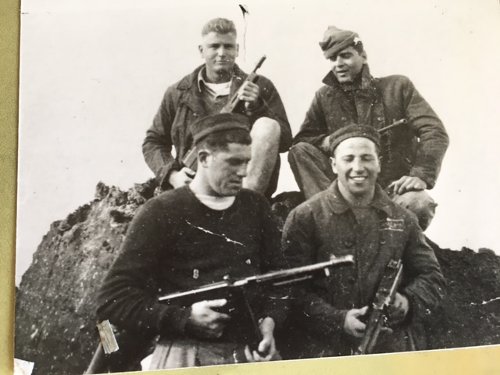 Paul (lower left with gun), Al Ellis next to him, upper left is Lenny Cohen and Hal Fineberg in Caesarian training as Seals 1948

His first ship was called Tradewinds. Docked in Baltimore harbor, it was a former US Coast Guard cutter that was now registered in Panama. It’s Haganah-trained crew sailed to Portugal, where they ran into a snag. British forces refused to allow it to refuel. A local captain overheard Paul say, “Oy vey!” and asked him if he spoke Yiddish. Paul said yes, and the captain donated Tradewinds fuel to continue her journey.

The boat journeyed to Lisbon, then to Italy, where it would pick up its passengers. While in Lisbon, Tradewinds was docked next to another Haganah ship, the President Warfield, that was waiting to pick up refugees. Paul became friends with Bill Bernstein, an American crew member who’d volunteered to help ferry Jews to Palestine. The President Warfield went on to pick up over 4,500 Holocaust survivors and change its name on route to Israel to The Exodus. 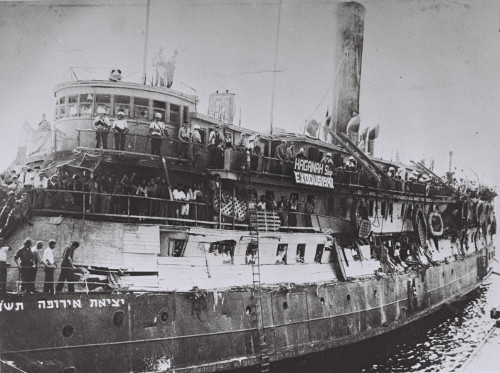 Paul’s boat took on a smaller passenger load, about 1,500, and Paul remembers the moment these battered refugees stepped on board the vessel as one of the most important in his life. “They were haggard,” Paul later recalled. “They had all they owned on their backs. They came up, they hugged and kissed us and said, ‘We are going to Eretz Yisroel (the Land of Israel). We’re going to our home.’”

British forces forced the HATIKVA to sail for Cyprus. Paul knew that grave consequences that faced him there.

That first trip ended in near-disaster. An airplane spotted the Tradewinds and alerted British destroyers who surrounded the boat. Undaunted, Paul and the crew painted over their boat’s name, renaming it the HATIKVA, Hebrew for hope. British forces forced the HATIKVA to sail for Cyprus. Paul knew that grave consequences that faced him there. “There was always fear,” he recalls. 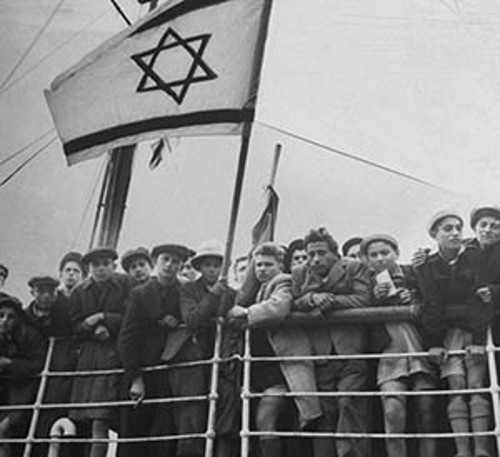 He was saved from British prosecution and prison or worse by a young Romanian Holocaust survivor who was a passenger on board. Paul’s shoes were covered with oil, a giveaway that he was an engineer and had been working on keeping the barely seaworthy vessel running. The Romanian traded shoes with Paul and when the boat docked in Cyprus, Paul spoke Yiddish and identified himself as a displaced person. “My father never spoke any English,” Paul explains. “I grew up in New York speaking Yiddish at home and blended right in with the passengers.” 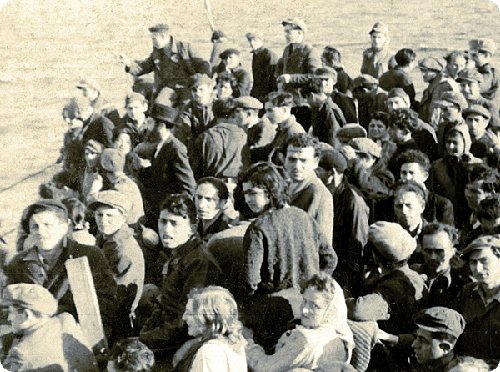 Immigrants crowd together on the deck of the ship, Hatikvah

Paul remembers one Haganah member, a former US Navy Officer, who only knew English. Thinking quickly, Paul told British officials that he was a Holocaust survivor who was too traumatized to talk. Despite carrying out their orders to stop and imprison these Holocaust survivors, many British soldiers showed compassion to the broken men and women in their care. The British officer began to cry and quickly left the room, sparing Paul’s comrade detection and a sentence of prison or death. 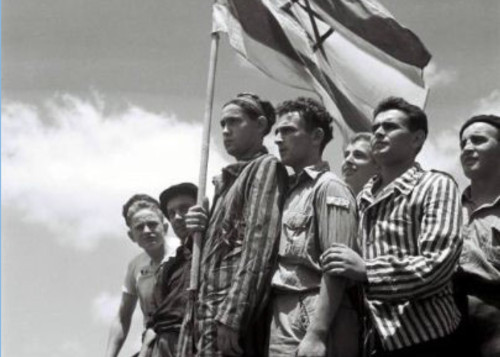 In Cyprus, the British instituted a quota system, allowing 750 Jewish prisoners each month to be transferred to the Atlit prison camp in Israel, near Haifa. His first month interned in Cyprus, Paul drew a lucky number; he was one of the 750 to be allowed to transfer to Israel. But Hal Fineberg, another American Haganah fighter (who later changed his name to Zvi Galil and fought in Israel’s War of Independence) was gravely ill with scabies and Paul gave his spot to him.

In Cyprus, surrounded by barbed wire and armed guards, Paul and the prisoners learned that the ship The Exodus en route to Palestine had been intercepted by British destroyers. Bill Bernstein, the other American volunteer Paul had befriended in Lisbon, was killed in the fighting, as well as two refugees. As Paul and other Jews languished in prison camps in Cyprus, things looked hopeless. One thought sustained them: the hope that one day they might make it out to the Land of Israel.

Paul eventually got his chance: he was one of another group of 750 prisoners selected to be sent to Atlit prison near Haifa. He would still be held prisoner for no crime other than wanting to enter the Jewish homeland, but at least he’d be on the soil of the Land of Israel.

With the help of the Haganah, Paul eventually escaped from Atlit prison, slipping under a barbed wire fence, and joined the Palmach, the Haganah’s elite fighting force. He returned to the United States with a fake passport and manned two subsequent ships that successfully brought Jewish refugees from Europe to Palestine.

On May 14, 1948, when Israel declared itself a state, Paul was with a boatload of desperate Jewish refugees making their way to Haifa. They quickly changed the name of their boat, a Panamanian-flagged ship called Director, to the Hebrew name Galila. That day, Paul now recalls at the age of 90, when the Jewish people once again had a national homeland, was his proudest moment. “We put an Israeli flag up on our ship - it was the first time we were able to sail as an Israeli ship.”

Paul eventually served in Israel’s navy and then returned to New York where he married and built a family. 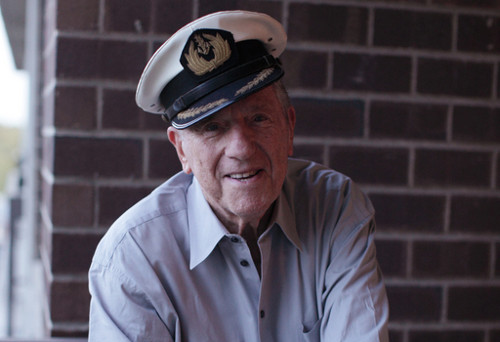 Looking back, he credits his incredible desire to help his fellow Jews to his mother’s influence. Paul’s father died when he was young and his mother had a strong Jewish identity. World War II was a turning point in Paul’s young life. “When I saw what Hitler was doing to the Jewish people I realized I have to do what I can do.” At the age of 17, that meant enlisting in the US Navy. At 20, it meant risking death and imprisonment to fight with the Haganah.

“We are being persecuted today as well. Anti-Semitism is increasing around the world and we have to stand up.”

Paul speaks publicly about his own experiences and tries to motivate young Jews to “stand up for themselves and to be proud Jews.”

Many have called Paul a hero but Paul doesn’t view himself that way. “I was working for my people. I had no choice but to step up and help my fellow Jews. When you’re working for your people, you’re not a hero.”

May we each find the strength to feel the obligation to help, and when our time comes to act, to say without hesitation, “Let’s go!”

Paul Kaye is featured in the documentary 4 Million Bullets: The Untold Fight for Israel’s Survival, that includes first hand testimonies about the clandestine effort to bring survivors to the Israel. Click here for more information.

The New Anti-Semitism
Chukat 5782: Let’s Play the Blame Game!
The Sin of Moses: The Two Ways to Communicate
In Aftermath of Chicago’s July 4th Shooting, Local Moms Provide Countless Points of Light
Comments
MOST POPULAR IN Israel
Our privacy policy