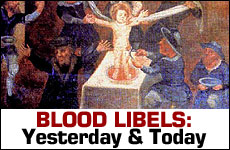 Recent rhetoric has raised the specter once again.

In 1911, a 12-year-old boy was kidnapped and murdered in Keiv, Ukraine. Local people accused an area Jew, Menachem Beilis, of committing the crime, and he was promptly arrested and held in the most appalling circumstances for two years. Beilis was innocent, but the fact that he was blamed for a crime he did not commit is not what was remarkable; Jews in Ukraine have long faced intense anti-Semitism, and it surprised few that a Jew was quickly arrested for the murder, on flimsy evidence.

What set the Beilis trial apart from other criminal prosecutions was the nature of the Russian government's case against him. Menachem Beilis became the last Jew in the West to be formally tried for the ancient slur of the blood libel.

He was accused, like many Jews before him, of killing a Christian child so that he could use her blood in a Jewish religious ritual. For nearly a thousand years, Jews like Menachem Beilis have been accused of procuring blood in this way. The reasons Jews are said to require this blood vary: usually, unlucky Jews were accused to needing blood to make Passover matzah, though other reasons (like having a physical requirement to ingest blood to stay healthy) have been voiced as well.

For months, into 1913, the Russian state conducted a formal trial into this bizarre accusation. Beilis remained in prison during this time, in the most appalling conditions, while "experts" and lawyers debated whether it was plausible that Beilis had killed the boy for religious reasons. Shockingly, given the strong air of anti-Semitism at the trial, Beilis was acquitted. (Anti-Semitism continued to dog him, however, and Beilis eventually left Russia for Israel some years later.)

Through Shakespeare, the blood libel became entrenched in English literature.

The first reliably recorded blood libel dates from 12th century England, and the myth of the blood libel (and related slurs of Jews committing murder for religious reasons) soon became entrenched in English literature. The Prioress' Tale in Chaucer's celebrated Canterbury Tales recounts one such ritual murder. Several hundred years later, another major piece of English literature brought the myth of Jewish blood lust to a new audience: Shakespeare's Merchant of Venice features the Jew Shylock itching to carve a pound of flesh out of poor Christian man.

In other countries, too, an imagined Jewish penchant for murder came to define the Jews, and sometimes helped shape Christian national identity as well. Simon of Trent (a young child supposedly murdered by Jews in the 15th century) is a popular saint in Italy. Another supposed victim, Hugh of Lincoln, was canonized in England after Jews were – in a grotesque twist – accused of first fattening him up before killing him. In the 12th century, the Jewish population of Blois, in France, was burned at the stake for supposedly murdering a young child. Even as recently as the 20th century, the blood libel was used in Europe, when Nazi publications resurrected the charge in an effort to stir up hatred against Jews. For in addition to demonizing Jews, accusations of blood libels could be used to unite populations and to channel dissatisfaction, as in community after community turned on the Jews in their midst.

The accusation of Jews as uniquely menacing continue to thrive in the Arab world, with the substitution of Muslim children being supposedly murdered.

A book, Matzah of Zion, written by a senior Syrian politician in the 1980s about a major blood libel in 1860 in Damascus, repeats the slur and continues to enjoy widespread popularity. In 2002, the Saudi daily Al-Riyadh published an article claiming that Jews require human blood to make pastries for the Jewish holiday Purim.

Jews as bloodthirsty, Jews as nefarious, Jews as a people with superhuman powers: all these anti-Semitic attitudes have root in the blood libel, and all of these attitudes, unfortunately, help shape the way the world sees Jews today.

Often, the inaccuracies of anti-Jewish prejudices are unexamined. For example, the 2003 television drama The Horseman, which depicts Jews as violent, bloodthirsty and secretly controlling the world, was wildly popular in much of the Arab world. Perhaps viewers were able to enjoy it because they had been conditioned to see Jews in this negative light.

Even in the Western world, these attitudes remain. The 2009 British bestseller, A Week in December by Sebastian Faulks, features a Jewish character with a nearly superhuman (and super-greedy) ability to destroy global prosperity.

At times, the blood libel even surfaces in grizzly accusations against Jews (especially Israelis) who want to mutilate people today. In 2009, the Swedish newspaper Aftonbladet reported, as fact, unsubstantiated allegations that Israelis were "harvesting" organs from Palestinian children to use in transplants. The accusations were investigated and found to be baseless, but the newspaper has yet to apologize.

In 2010, Baroness Jenny Tongue, a member of Britain's House of Lords, rephrased the libel, calling on Israel to investigate "claims" that Israeli humanitarian workers travelled to Haiti in the aftermath of the devastating earthquake there in order to harvest organs from Haitians to use in transplants.

Anthony Julius, concluding his masterful 2010 book on English anti-Semitism, Trials of the Diaspora, observed that "anti-Semitism is a sewer" and vowed never to revisit such a disturbing topic.

But we as Jews – as all thinking people, in fact – do not really have that luxury. Shining a spotlight on dark places helps to expose the lies they contain, and can help address entrenched attitudes and prejudices. We all have an obligation to counter lies and distortions whenever we meet them.

"When G-d is with me, I have no fear of what any mortal may do to me" (Psalms 118:6). Jewish history is so rich, and its tradition so beautiful, that when we delve into our own heritage, when we learn the truth about our own religion and history, we arm ourselves with the truth. Jewish history is not blood libels an all the horrible allegations made against us: it is the history of our people serving G-d with dignity, and reaching out to make the world a better place.