A Cantonist's Prayer on Yom Kippur 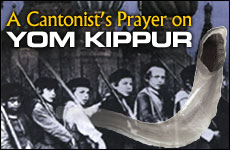 On that Yom Kippur the community wept, as they confronted the plight of Jewish children forced to serve in the Russian army.

The concluding Ne'ilah prayer on Yom Kippur, represents the final chance through fervent and impassioned prayer to appeal to the mercy of the Almighty. One short prayer on one Yom Kippur at Ne'ilah encapsulated a tragic era in Jewish history, and moved an entire congregation to tears. Abraham Lewin, the author of a book in Yiddish entitled, Kantonisten, (Cantonists) relates an incident on Yom Kippur involving a Cantonist in an unnamed Russian city.

The Cantonists were child recruits in the Russian military. The Russian Czar, Peter the Great, devised the system in which young men were drafted to serve in the military for prolonged terms.

Czar Nicholas Pavolovich (1827-1855) used this system as a vehicle to force Jewish children to accept baptism. The children were literally stolen from their homes in the shtetles [small villages] and forced to serve extended terms as trainees and then as soldiers when they reached the age of 18. They faced severe pressure by all means including torture to accept baptism. Prior Russian Czars may have repeatedly failed to induce the Jews of the Pale Settlement to abandon their faith, but Nicholas was determined to enforce his will upon the children.

The fact that Abraham Lewin's Cantonist entered a synagogue on Yom Kippur indicates that he most probably had not succumbed to the pressure of baptism. Had he done so, he would have been officially listed as a Christian and prohibited from entering a synagogue during the reign of Nicholas.

Levin relates that the congregation appointed the Cantonist to lead the Ne'ilah prayers -- the most hallowed moment of the year. This was a great honor, especially for a guest. The gesture clearly demonstrated great admiration for the man who tenaciously held onto his faith at all costs.

The soldier of Czar Nicholas made his way to the front of the synagogue. Having forgotten almost all the religious training he had received as a child, including the ability to read Hebrew, he could not recite, nor lead, Ne'ilah. However, he expressed a powerful prayer from his heart. He proclaimed, "Father in Heaven, what should I pray for? I can not pray for children for I never got married and have no hope to raise a family for I am too old to start anew. I can't pray for life, for what value is such a life? It would be better for me if I died. I can not pray to be able to make a living since Nicholas provides for my daily food. The only thing I can pray is, 'Yisgadal VeYiskadash Shmei Rabah' meaning "May Your name be blessed forever" (from the Mourner's Kaddish).

When hearing these words, the entire congregation wept. They wept over the plight of the unfortunate individual and his difficult life of travail. They also wept for the tens of thousands of other Cantonists who were forced to endure the same hardships, as well as their families and communities. Many Cantonists had died from the rigors or had accepted baptism; others were simply lost in Siberia hundreds of miles from their homes.

All Jewish communities were faced with the Czar's quotas of providing recruits. The Czar issued the orders and most leaders of each town's Kahal, (Jewish communal organization), under great pressure, provided the recruits. The Chappers (kidnappers) did the dirty work of the Kahal for a fee. The recruitment decree caused divisions and resentment within the Jewish community as it exempted the sons of those among the wealthy merchant classes while the poor were generally the victims.

He reminded the congregation of the sinners - and the many heroes - of that era.

Then there was the betrayal of turning in children. Kahal leaders simply could not argue that they had no choice, since many profited from payments from the government for providing recruits, and also from those who possessed sufficient funds to pay for their sons' exemptions. How demoralizing and traumatizing that era was for the Jews of Russia! That, too, was no doubt part of Nicholas' strategy. All Jews who lived under the Czar's rule were affected by the horrors of this era.

On Yom Kippur, at the moment of Ne'ilah, a congregation was confronted with the agony of that era by the heartfelt words of a true hero - one of thousands who stood against Nicholas and displayed a type of heroism unusual for adults, let alone children. He reminded the congregation of the sinners - and the many heroes - of that era. On that Yom Kippur day, the moment of Ne'ilah was truly one of introspection and reckoning for all present.

From Egyptian Muslim to Defender of Israel

What Do You Love about Jerusalem?

The Kippah Debate
Where Do the Laws of Nature Come From?
Saadiah Gaon, Rashi and Maimonides: How Three Rabbis Revolutionized Judaism
King Sennacherib and the Siege of Lachish
Comments