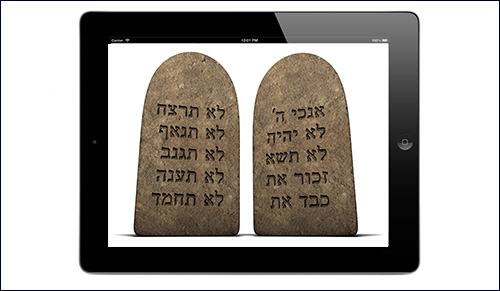 Why we need them now more than ever.

If God would have wanted to tweet the 10 Commandments on Twitter, He would’ve been restricted to 140 characters. As it is, He used 620 letters to write the entire Decalogue on the two tablets He gave to Moses on Mount Sinai. That’s because this magnificent summary of ethical behavior contains the key to all 613 mitzvot meant for the Jewish people as well as the 7 universal laws for mankind – 620 in all.

There has never been a better synopsis for righteous living than this essential text of Torah. Like all of Torah, no matter how much the times have changed the message of the 10 Commandments is timeless.

Here are ten ideas from the Decalogue that come from a contemporary perspective.

Merriam-Webster added “selfie” as one of the 150 newly adopted legitimate words for 2014. The aggrandizement of self, the preoccupation with ego, the narcissism of our generation needs above all to be reminded that “it’s not all about you.”

“I am the Lord your God” – there is a higher power who created the world, who is in charge of the universe, who gave us laws that need to be observed for the benefit of all of mankind.

No moral system can be based solely on concern with the self. If man is the sole arbiter of goodness then evil will always be rationalized as necessary for personal pleasure and privilege.

As Dostoyevsky so perceptively put it, “Without God, all is permissible.”

“Just do it” may be a good slogan for Nike but it can’t serve as ideal for the behavior of an entire generation.

2. “You shall have no other gods before me”

Did you get caught up in the Kanye West/Kim Kardashian wedding obsession? Sociologists have a name for the idolatry of our times. It’s “celebrity worship syndrome,” It describes the pedestal on which we have put our movie stars, sports figures and famous people, follow their every move, and treat them as modern gods. There is a giant media subculture around the cult of personality. Gossip and news about the rich and famous is big business. Magazines like People and Us Weekly, TV shows like Access Hollywood and Entertainment Tonight, and a long list of blogs such as Gossip Girl, TMZ.Com, and Perez Hilton have captured our imagination. There are more celebrity magazines than real news magazines in the United States.

And what is the real problem in all of that? It’s that the celebrities of our time have become our heroes, and while I’m sure some of them are fine, upstanding people, no matter how infamous the famous, no matter how devoid of values their lifestyles, these people have become the role models for our youth, the veritable gods of our society.

In The Decline and fall of the Roman Empire, Edward Gibbon asserted that there were several factors contributing to the fall of Rome, but prime among them he said "The development of an over-obsessive interest in sport and celebrity was one of the main factors in the collapse of the greatest civilization ever known to man." That’s why God warned us so strongly against worshiping false idols.

3. “You shall not take the name of the Lord your God in vain”

Beware most of those who camouflage their evil motives under the guise of serving a holy cause. The national memorial to the victims of 9/11 just opened. It is a striking and moving testimony to the need for memory to ensure that the tragedies of history not be repeated, that we learn from the past so that we must not be condemned to reprise its horrors.

And what is the message that ought to speak most starkly to us? Those who brought down the twin towers justified their murderous deed with words of praise to their God. Taking God’s name in vain – presuming to act on behalf of the Father of all mankind even while destroying His children – is a sin that strikes at the heart of all religions, capable of bringing God himself into disrepute. All those who justify violence, hatred, and wickedness in the name of the Almighty who clearly abhors these actions stand guilty of profaning the third commandment.

There was a time when scholars predicted that technology would grant us the leisure to fulfill ourselves spiritually, to become more than beasts of burden whose lives are circumscribed by the demands of all-consuming work. Instead, the title of a perceptive new work by Brigid Shulte says it all for 21st century Americans: “Overwhelmed: Work, Love, And Play When No One Has the Time.”

The idea of the Sabbath came to teach the world that there must come a time in our lives when we set aside technology for a higher purpose. Remarkably, Eric Schmidt, the CEO of Google, felt that this was the most important point he had to make in his commencement address to the graduating class of the University of Pennsylvania. The head of the world's most popular search engine urged college graduates to step away from the virtual world and make human connections. He told them "Turn off your computer. You're actually going to have to turn off your phone and discover all that is human around us." And that is what God told us to do once every seven days.

There is great truth in the famous observation of a visitor to the United States who said, “The one thing that impresses me most about Americans is the way in which parents obey their children.”

Children need parenting – and the first step is to demand respect.

The only commandment which has a reward alongside of it is the one that requires children to honor their parents. Our contemporary child worshiping society needs a strong dose of the reminder to enforce the fifth commandment.

The Torah makes clear that this commandment is violated not only by those who actively commit the crime but also by those who passively sit by and watch without intervening. In an age of unchecked terrorism threatening civilization, in a time when nuclear capability makes global destruction possible, there is no excuse for failure to be involved in responding, be it to the cataclysmic threat from Iran or the murderous menace of fanatic Muslims.

7. “You shall not commit adultery”

Three of the 10 Commandments are so severe they demand martyrdom to prevent their violation. One of them is sexual immorality – a sin that permeates our culture even as it threatens the sanctity of marriage and the preservation of family life.

According to a major new study, over half of all television programming is filled with sexual content; in prime time, over two thirds of all shows deal with it. Sexual permissiveness is the norm. Chaste behavior is depicted as abnormal, faithfulness in marriage as unrealistic.

The seventh commandment is God’s way of reminding us that happy marriages require commitment and that – in spite of what Hollywood says – it is more than worth it in creating relationships that last a lifetime.

In 2008, the widespread corrupt practices of major Wall Street banks triggered a financial meltdown, hundreds of billions of dollars in losses to unsuspecting investors and homeowners, and the worst recession of modern times. Very few top executives were prosecuted in the massive financial scandal. Corrupt politicians, sleazy bankers, crooked business moguls are the cause of much cynicism in our contemporary society. Stealing in all forms, from petty theft to the high echelons of the corporate world, cannot be tolerated.

9. “You shall not bear false witness”

Lying is a sin. Yet remarkably enough a Florida Court of Appeals unanimously ruled that there is no law against distorting or falsifying the news in the United States (see http://www.projectcensored.org/11-the-media-can-legally-lie/). Read how the media, including the New York Times – the supposed Bible of journalistic integrity – cover Israel and those intent on its destruction and you fully appreciate the extent to which truth has become a victim of prejudice and honest reporting a fatality of anti-Semitism.

Consider this quote from John Swinton, former Chief of Staff for the New York Times in an address to the New York Press club: "There is no such thing, at this date of the world's history, in America, as an independent press. You know it and I know it. There is not one of you who dares to write your honest opinions, and if you did, you know beforehand that it would never appear in print.”

It is a tragic fact that the media today simply refuses to accept the ninth commandment.

There is a multibillion-dollar industry whose goal is to make every one of us covet. It is called advertising. It makes us believe that we can never be happy with what we have, only with what we do not as yet own. It wants us to believe that true joy can only come from having more stuff – and then somehow finding the money to buy ever bigger homes and mansions in which to store it.

The Torah wants us to remember that happiness comes not from what we have but from who we are. Inner contentment is a result of knowing that our lives have meaning because they conform to the values of our creator.

How important are these teachings of the Decalogue? The midrash tells us that the reason God created us with 10 fingers is so that whenever we look at our hands we might constantly be reminded of these 10 truths the Almighty long ago revealed to us at Sinai.

Infusing Passion in Your Judaism