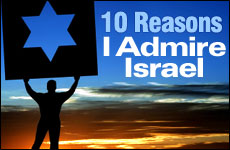 Israel’s story is one of the great chapters in the annals of history.

In the daily news coverage, as they say, if it doesn't bleed, it doesn't lead. The larger story of Israel, therefore, is rarely told.

And the steady barrage of anti-Israel assaults -- from the UN's Arab-led automatic majority to the boycott-sanctions-divestment crowd; from some PR-savvy NGOs to the red-green (extreme left-radical Muslim) alliance -- doesn't always leave much room for the bigger picture, either.

But the larger story of Israel is well worth telling. Indeed it is, to paraphrase Winston Churchill, one of the great chapters in the annals of history.

Here's what I admire most:

First, the Jewish people's identity is built on three legs -- a faith, a people, and a land.

The land is inextricable to the equation. Even when Jews were forcibly removed from the land, as they were more than once, they never, not for a single moment, lost the connection. It was core to their prayers and their belief systems. Jerusalem, physically and metaphysically, is at the center of Jewish existence. The determination of Jews to reaffirm that link, over literally thousands of years, is awe-inspiring.

Second, those who lived in or returned to the land before the rebirth of the state in 1948 faced indescribable challenges.

Those challenges could easily have defeated less determined people. The terrain itself was harsh and unyielding. The swamps were disease-infested. Water was scarce. Marauding Arab bands put them at risk. But they persisted.

Third, these pioneers, against all the odds, gave birth to field after field, tree after tree, job after job (for Jews and Arabs alike), and neighborhood after neighborhood.

And, equally, they gave birth to Modern Hebrew. They took an ancient language and rendered it contemporary, which in turn became the lingua franca of the new state.

Fourth, the politics of statehood were not uncomplicated.

It took 50 years from Theodore Herzl's vision of a reborn Jewish nation to the UN Partition Plan of 1947, which called for Jewish and Arab states to emerge from British-ruled Mandatory Palestine. During those five decades -- and all the global ups and downs, governments' sleights-of-hand, and power politics -- Jewish leadership in the land persevered. They were undeterred.

Fifth, that same Jewish leadership understood that half a loaf was better than none. While the Jews would have wished for a bigger state, and believed the historical facts warranted it, pragmatism prevailed over maximalism. And therein lies the fundamental difference between Jewish and Arab leadership at the time, and since.

The 1947 Partition Plan could have solved the national aspirations of Jews and Arabs alike (i.e., Palestinians, though the term was not then used by the UN). There would have been two states for two peoples, living, ideally, side by side in peace and cooperation. But the Arab insistence on the whole loaf triggered war. The war in turn created a refugee problem, and that dream of the whole loaf continues to be nurtured by too many Palestinian leaders.

Sixth, the 1948 war to annihilate the new state might have been Israel's first and, yes, last war, but it wasn't.

Vastly outnumbered and outarmed, the 650,000 Jews could have been vanquished by the five attacking Arab armies, including the British-trained Jordanians. But they dug in, fought on with often hard-to-acquire weapons, and eventually won, while losing one percent of their entire population -- the first of several wars Israel was to win to defend its very right to exist.

Seventh, Israel's ability to defend itself is nothing short of extraordinary. A country the size of New Jersey, and without a favorable military topography, has withstood repeated assaults of every kind -- wars, missile barrages, suicide bombings, kidnappings, lawfare, and modern-day blood libels.

The morale and commitment of Israelis to fulfill their national obligations -- when, no doubt, they'd much rather be studying, socializing, and traveling -- is remarkable. Alone, having never asked for the help of other nations' troops, they defend the state. And Israel's technical ingenuity in meeting each new challenge head-on has served as an object lesson for other countries. From Entebbe to Iron Dome, from Osirak to the Syrian nuclear plant, Israel has come up with viable answers to seemingly insurmountable threats.

Eighth, Israel has forged a far more cohesive, vibrant society than many predicted.

How, the skeptics asked, could Israel absorb Jews from scores of countries with different languages, political traditions, cultural norms, and religious practices? How could Israel forge a democratic state when so many refugees came from non-democratic Arab lands and communist societies -- and in a region, the Middle East, where there was absolutely no tradition of free, open societies? How could religious and secular Jews coexist? How could Israel absorb over 100,000 Ethiopian Jews, who hailed from villages that had no electricity or other modern accoutrements? And how would non-Jews, especially a large Arab community, fare as citizens of the State of Israel?

These are all works in progress, but, 64 years after the rebirth of Israel, it can be said that the centripetal forces binding the state together far outweigh the centrifugal forces at work -- and that's no mean feat, given the magnitude of each of the challenges.

Ninth, in the face of unrelenting threats and dangers, Israel could have turned inward, abandoned hope, and given up on peace, but it most assuredly has not.

Instead, Israel has embraced the world, sharing its vast know-how with developing countries and often being among the first on the scene when disaster strikes. It has affirmed life in a way that outsiders can hardly imagine. And, despite one spurned peace effort after another since the landmark treaties with Egypt (1979) and Jordan (1994) -- not to mention the experiences of withdrawal from southern Lebanon only to have Iranian-backed Hezbollah step in, or from Gaza only to have Hamas, whose charter calls for Israel's destruction, take control -- Israel still clings to the belief that peace, based on major territorial compromise and a two-state solution, is possible.

And tenth is what travelers see for themselves when they come to Israel.

As many first-time visitors have commented, they had no idea that Israel was so small or its security challenges so complex.

They had no clue that Arabic was an official language and Israeli Arabs, even those opposed to the state's very existence, have been elected to the Israeli parliament.

They were unaware that churches and mosques are found everywhere, with full freedom of worship protected.

They had no sense of how ancient and modern, at one and the same time, the country is.

They had no understanding of what a full-throttled democracy Israel is, including a feisty press, an independent judiciary, an array of active NGOs, political parties galore, and an argumentative, self-critical culture.

And they had no hint how proud of their country -- and optimistic about the future -- are the vast majority of Israelis.

For nearly 2,000 years, Jews could only dream of, and pray for, the rebirth of Israel. Today, it is a living, breathing, and pulsating reality. And I count myself among the lucky ones to see it unfold before my very eyes.

By Air, Land, and Sea: Aliyah under the British Mandate
Faith: the Axis Upon Which the Wheel of Science Turns
Love - Not Just About Chemicals Anymore!
Is There a Moral Code in a Virtual World?
Comments