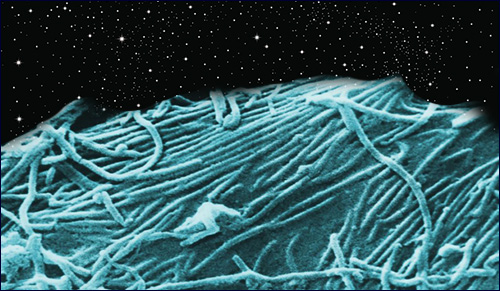 Feeling security in a hostile world we cannot control.

“It was a mistake. They dropped the ball.”

When Mr. Duncan arrived at Texas Health Presbyterian Hospital on Friday, September 26, he told staff he’d recently travelled to Dallas from Liberia, one of the countries in the heart of the rampant Ebola epidemic. Back home in Liberia, the week before, he’d helped transport a woman dying of the disease to a hospital. When the hospital turned her away for lack of room, Mr. Duncan carried her home, where she died shortly after. Now, having travelled to Texas, he was showing signs of the disease.

Hospital staff sent him home with antibiotics. Over the next two days, Mr. Duncan came into contact with scores of people – as many as 80, officials now think, many of them children. When he finally became too sick to ignore, Mr. Duncan took an ambulance back to Texas Health Presbyterian Hospital, where he officially became the first person to sicken with Ebola on American soil.

As Texas health officials race to isolate and monitor all the people who came in contact with Mr. Duncan, their efforts are beginning to look a lot like the measures African officials have taken over the past several months, as they tried to outstrip the Ebola epidemic now raging across western Africa.

Ebola was first diagnosed in humans in 1976 along the banks of the Ebola River in Zaire. It’s thought to pass to humans from bats and wild animals. Once infected, people initially display symptoms that can be confused with malaria or even the flu: early Ebola symptoms include headache, sore throat, fever, muscle pain and weakness. Ebola rapidly progresses, however, leading to a host of deadly symptoms: difficulty breathing, bleeding from internal organs, vomiting, diarrhea, and damaged kidneys and liver. Ebola is highly contagious; it’s transmitted through direct personal contact with the bodily fluids of a person displaying Ebola symptoms. Although some experimental drugs are being developed and tested, there is no wide-spread, effective cure or vaccine for the disease.

There have been dozen of local outbreaks of Ebola over the years, but these usually occurred in small, remote villages, and were fairly easily contained. The current outbreak, which began in Guinea in March, 2014, is unprecedented: over three thousand have already died, and the US Center for Disease Control warns that 1.4 million people could be infected with Ebola by the end of the year, and that nearly half of those victims could die of the disease.

“This epidemic is without precedent,” says Bart Janssens, the director of Doctors Without Borders, one of the largest charities working to slow the epidemic: “It’s absolutely not under control, and the situation keeps worsening.”

US officials have assured the American public that Ebola will be different in the United States. “We’re stopping it in its tracks in this country,” stated the head of the Center for Disease Control. Officials have emphasized that the US, with its advanced health care system, differs vastly from the poor nations in West Africa that have been overwhelmed by the epidemic.

But with recent lapses in America, perhaps we should not feel so secure. The decision to send Thomas Duncan home was the first American response to the disease, and we failed that trial miserably. Now, a dozen people are under quarantine in Texas, waiting to see whether they show signs of Ebola.

Other vaunted institutions are coming into question, too. Julia Pierson, the director of the Secret Service recently resigned over lapses in her agency. One glaring stumble occurred in September 2014, when an armed trespasser jumped the fence of the White House, overcame one Secret Service officer and made it all the way into the East Room before being subdued. Are you prepared to put all your trust into these institutions?

As the world struggles to contain the Ebola crisis, Jews around the world are preparing to step outside their own zones of feeling secure, too – literally.

As the seasons change and the air gets chilly and we start to retreat indoors, on Sukkot Jews do the opposite, eating, spending time, even sleeping outside in a sukkah, a temporary hut that provide scant protection. When we sit in a sukkah, we become hyper-aware of how vulnerable we are to our surroundings: the rain, the sun, extremes of heat or cold. For one week, we acutely feel that we are dependent on something outside of ourselves.

The thought of coming face to face with our vulnerability like this might seem frightening, something negative and stressful. But another name for Sukkot is Zman Simchateinu, the time of our joy.

Sukkot commemorates the huts our ancient Jewish ancestors lived in during the 40 years they travelled after leaving Egypt. Each day, they were fed with a miraculous food, manna, which helped them realize that they were ultimately dependent on God for their survival. Today, when we recreate these circumstances, moving outside to live in our very own sukkahs, we also realize anew that what we have comes not only from our own labor, that the Almighty is the ultimate source of our protection and everything that we have. We are not alone; we live under God’s ever-watchful, loving embrace.

As we confront the Ebola outbreak and our other challenges, we have to act responsibly and put in our efforts to solve our problems and ensure our own security. But we also have to acknowledge that we cannot do anything without God’s help. During Sukkot, when we feel closer to the Divine than at any time of the year, let’s remember that our sense of security living in a hostile world that we cannot fully control comes from the Almighty Who has got it all under control.

Sukkot and the Single Woman
What Makes Eli Run?
The Tyranny of Materialism
Science Enters the Mysterious Inner World of Consciousness
Comments
MOST POPULAR IN Current Issues
Our privacy policy