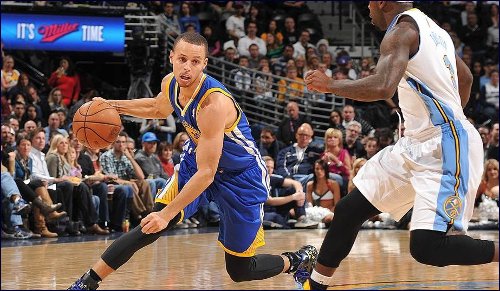 Mastering the art of the crossover in basketball and in life.

Years ago, I was flying to Texas and wound up sitting next to an NCAA basketball coach. It was a dream come true. I don’t think he realized how little sleep he was going to get on this flight once he introduced himself. Having played varsity basketball in high school, I started quizzing him on everything I could think of, remembering back to my games and asking about plays, presses, defenses, and picks.

At one point, I asked him, “What’s the hardest move in basketball?”

“The fadeaway?” I asked.

“Nope,” he said. “The crossover. Very few players can master the crossover. It’s the hardest move because you’ve got to get the defender to actually believe what you’re doing. Most people just kind of fake it a little bit, and it doesn’t really work. The greatest players in the game – Michael Jordan, Kobe Bryant, Allen Iverson – these guys made their careers on mastering that crossover.”

“Well, what’s the secret to a great crossover?” I asked him.

He smiled, as if I were one of his players. “You have to be able to go all-in in one direction and then, on a dime, turn and go all-in in the other direction. If you’re not all-in, the defender won’t get faked out – so when you switch and go the other way, he’ll be there with you. You can’t just fake it. You have to actually go in that direction and then switch as soon as he bites.”

Our nervous systems can only process about 110 bits of information per second. Allocate that across hundreds of different tasks, and we wind up an inch deep and a mile wide. That’s why we’re never really great at anything. We’re never really in anything.

The University of London did research on what happens to the brain when we multitask. The study found that in people who multitask during cognitive tasks, IQ levels are significantly reduced – to the same degree that IQ is reduced by smoking marijuana or staying up all night. Some men in the study saw their IQ levels reduced to that of an 8-year-old.

“To do two things at once is to do neither.”

Another study at the University of Sussex looked at the MRI scans of the brains of people who spent time on multiple devices. What they found is that frequent multitaskers actually had less brain density in the anterior cingulate cortex – a region responsible for empathy as well as cognitive and emotional control.

That can’t be good.

All of this leads to a cascading problem for us: Doing something without being fully present decreases the enjoyment you have for the activity and the likelihood that the action will be fully effective. So we are less successful and less happy, which makes us more distracted and less present. And the downward spiral continues.

As Roman philosopher Publilius Syrus put it, “To do two things at once is to do neither.”

Daddy, Are You Okay?

I remember the time I was throwing a football around in the backyard with my son, and at one point he looked at me and said, “Daddy, are you okay?”

“Because you keep throwing it over my head!”

And I realized: I wasn’t okay. We were playing football, but only around 10 percent of me was playing football. I was 50 percent worrying about something that happened that day at work, 20 percent thinking about the next day, 10 percent wondering if the phone in my pants pocket had just buzzed from an e-mail that came in, and 10 percent thinking to myself, “When is this going to be over? We’ve already thrown the ball back and forth 30 times, and we need to get back inside.”

If you had told me 20 years earlier, “One day, you are going to get to play catch with your child in the backyard,” I’d have said, “That’s my greatest dream!” And here I was, tossing a football around in my backyard, and I wasn’t there.

How many moments like that had I missed? How many experiences had I completely let slip by because my mind was in so many different places at once that I was actually nowhere?

In her bestselling book, All Joy and No Fun, Jennifer Senior provides an insight as to why studies on working moms found lower levels of happiness than non-parents, and little satisfaction in parenting in general. It was the same reason why I wasn’t enjoying playing ball with my kid: When they were with their kids, they weren’t with their kids. They were constantly multitasking. They weren’t present. Working moms were so busy that even though they loved their kids, their experiences with them were not pleasurable because they constantly felt rushed and distracted.

What the research suggests is that if these moms – and the same goes for dads – could just be present with their kids, in the moment, they would enjoy those experiences more. They would then be satisfied with the experiences. When they’re at work, they feel guilty for not being with the family; and when they’re with the family, they’re feeling guilty and distracted for either not being at work or thinking about work. Always feeling like there’s somewhere else you should be is draining. Being present means that you know you’re in the right place at the right time. And when you allow yourself that feeling at home, you don’t carry guilt with you into the office (and vice versa).

This feels a little unrealistic, doesn’t it? Parents aren’t trying to be distracted from their children; they are just trying to balance everything. Many people feel like they are pulled in a million directions because of their daily responsibilities. Between a mortgage, carpool, Little League, work, traffic…it’s hard to manage everything. And and on top that, we carry around a device that buzzes all day with more stimuli that clamors for our attention.

We’re all juggling too many balls, and we feel like we can’t let any of them drop. How are we supposed to find time to be fully present in anything?

Therein lies the power of the crossover.

The crossover is the hardest move in basketball because it requires going all-in in one direction and then, in a moment, going all-in a different way. Each direction is quarantined. The skill is in the pivot. If you could see into the mind of a player during the move, you would see how confident he is choosing one direction while knowing he has the ability to switch, or cross over, at just the right moment.

The essence of the crossover is that you get to go all-in for brief moments of your day. That will give you the benefits of being present, while still maintaining balance in your life.

Free Live Class with Charlie Harary:
Preparing for Passover: The Seder and Why Freedom Begins with Your Mind

Mr. Charlie Harary, Esq. is a prolific speaker who has traveled all over the country and abroad speaking for organizations, schools, universities and institutions on a variety of topics and to audiences of various sizes and affiliations. He has created dozens of videos that have received worldwide attention reaching hundreds of thousands of people in over 15 countries. Mr. Harary is the CEO of H3 Capital LLC, a private equity company based in New York. Prior to H3 Capital, Mr. Harary was the First Vice President of Residential Operations and Legal Counsel of RXR Realty, a multi-billion dollar Real Estate Company based in New York. Prior to RXR, Mr. Harary was an associate in Paul, Weiss, Rifkind, Wharton & Garrison and Davis Polk & Wardwell. He received his J.D. from Columbia Law School where he was awarded the James Kent Scholar and the Harlan Fiske Stone Scholar. Mr. Harary is an Associate Professor of Management and Entrepreneurship at the Syms School of Business in Yeshiva University. He is also a Senior Lecturer for the Orthodox Union, Aish Hatorah and NCSY. In addition, he is an active community leader. He is the founder and president of Milvado Inc., an organization that develops innovative methods to teach spirituality in relevant and modern ways. He is a member of the Executive Board of the OU as well as the Founding Chairman of its Young Leadership Cabinet. He is also a member of the Conference of Young Jewish Presidents.