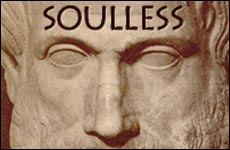 The Greeks thought that physicality was a primary goal of man.

It would seem a promising premise for story about Chelm, Jewish folklore's fabled town of the clueless. The resident philosopher sagely informs his fellow citizens that since he can't perceive his own face directly he must not have one. Besides, he explains to the townsfolk, as anyone can plainly see, what seems to be his face clearly resides in his mirror.

The Chelm tale idea is inspired not by hopeless simpletons but by celebrated scientists. Like Yale psychology professor Paul Bloom, the author of a new book, "Descartes' Baby," about, as its subtitle puts it, "what makes us human." In a New York Times op-ed, Professor Bloom lamented human beings' stubborn commitment to "dualism," the philosophical idea that people possess both physical and spiritual components. He pities those who, like his six-year-old son, insist on pretending that there is an "I" somehow separate from the physical cells of one's body and brain.

The boy's father, though, knows that his son's intuition is wrong. "The qualities of mental life that we associate with souls are purely corporeal," he asserts confidently. "They emerge from biochemical processes in the brain."

Is the brain a pocket PC for the soul?

Joining the call to re-educate and enlighten the backward masses is Professor Bloom's admirer at Harvard, the gifted psychology professor Steven Pinker, who, in a newsmagazine essay of his own, mocks those who think of the brain as "a pocket PC for the soul, managing information at the behest of a ghostly user." Professor Pinker advises us to set aside such "childlike intuitions and traditional dogmas" and recognize that what we conceive of as the soul is nothing more than "the activity of the brain."

Or, as they might say back at the University of Chelm, since the soul seems perceptible only through the brain, the brain, perforce, must be the soul.

Sometimes, though, intuitions are right and interpretations of evidence (especially the lack of it) wrong. Scientists, after all, as the noted British psychologist H. J. Eyesenck famously observed, can be "just as ordinary, pig-headed and unreasonable as anybody else, and their unusually high intelligence only makes their prejudices all the more dangerous." Some, moreover, are prone to a perilous folly: the confidence -- despite the long and what-should-be chastening history of science, littered with beliefs once coddled, then discarded -- that they have, eureka, arrived at conclusive knowledge.

Were the contemporary dualism debate merely academic, we might reasonably choose to ignore it. Unfortunately, though, the denial of humanity's specialness -- the unmistakable ghost in the Bloom/Pinker philosophy-machine - is of all too formidable import.

The negation of the concept of a soul -- the holy spark of the divine that was infused into the first man and that makes all his descendants special, requiring them to act in a special way -- has had, and continues to have, deep repercussions in broader society.

The idea of the soul goes to the very heart of many a contemporary social issue. It directly influences society's attitudes regarding a universe of moral concerns, from animal rights to abortion; from the meaning of marriage to the treatment of the terminally ill.

A soulless world might not consider any insect our inferior.

There is no escaping the fact; the game's zero-sum: Either humans are something qualitatively different from the rest of the biosphere, sublimated by their souls and the responsibilities that attend them; or they are not. And a society that chooses to believe the latter is a society where no person has any reason to aspire to anything beyond the gratification of the instincts or desires we share with the animal sphere. A world in denial of the soul might craft a utilitarian social contract. But right and wrong would have no meaning at all; for the individual, there would be only the cold calculus of biological survival and the pursuit of pleasure.

The notion is hardly novel, of course. Humanity has encountered "materialists" -- those who see reality as limited entirely to the physical -- on a number of occasions. Men bent on de-spiritualizing humanity's essence were the high priests of the Age of Reason and the glory days of Communism.

The very first "materialists," though, may well have been the ancient Greeks, who placed capricious gods where, today, some professors seek to ensconce nerves and synapses.

Hellas, focused as it was on reason and inquiry, produced unprecedented celebration of the physical world. Hundreds of years before the Common Era, Erastothenes calculated the earth's circumference to within one percent; Euclid conceived and developed geometry; Aristarchus proposed a heliocentric theory of the solar system. And the early Greeks' investigation of the physical world included as well, and prominently, the human being. But only as a physical specimen, essentially an animal.

Accordingly, much of Hellenist thought revolved around the belief that the enjoyment of life was the most worthwhile goal of man. The words "cynic," "epicurean," and "hedonist" all stem from Greek philosophical schools.

Shabbat denied the unstopping nature of the physical world.

And so it followed almost logically that the culture that was Greece saw the Jewish focus on the divine as an affront. Shabbat denied the unstopping nature of the physical world; circumcision implied that the body is imperfect; the Jewish calendar imparted holiness where there is only mundane periodicity; and modesty or any sort of limits on indulgence in physical pleasure were simply unnatural.

The Greeks had their "gods," of course, but they were diametric to holiness, modeled entirely on the worst examples of human beings, evidencing the basest of inclinations. And while Hellenist philosophers spoke of a "soul," they employed the word to refer only to what we would call the personality or intellect. The idea of a being "in the image of God, of a soul that can make choices and merit eternal existence, was utterly indigestible to the Greek world-view.

As it is indispensable to the Jewish one. With the passage of centuries and the example of those who lived the Jewish faith, humanity became heir to the earth-shattering idea that it is in fact special within creation, and charged with living as special; that our souls are eternal and what we do makes a difference.

Chanukah is when we focus on the crucial difference between the ideals that animated the Jewish people and those that embodied Hellenism. May the holiness that seeps into the world this year through the Chanukah candles of Jewish homes everywhere help counter the modern-day attempts to deny reality, and leave a more soulful world in its wake.

Publicizing Miracles
Is Grease the Word?
Dried Fruit Compote
Scientific Curiosity and the Divine Encounter
Comments
MOST POPULAR IN Chanukah
Our privacy policy
Aish.com Is Looking for Great Writers