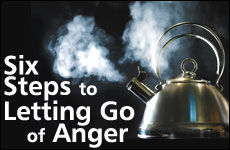 How to drop unresolved anger and find inner peace and emotional balance.

Rachel was an elegant and well-dressed woman of 43, who consulted me following a bitter divorce from her husband of 15 years. Underneath her dignified exterior lay a thoroughly exhausted woman who spoke of the unbearable pain and anguish of her unhappy marriage.

Yet despite her fury toward the man who she felt had "ripped a sense of safety and security" from her life and that of her three school-age children, Rachel had an awareness we would all do well to internalize. She recognized that blaming her husband for her present misery, no matter how justified and easy to do, would only keep her stuck and impotent. Hinging her emotional well-being on the actions of another person would only leave her feeling like a victim. Rachel knew that she was responsible for healing her own life, and that she alone was responsible for her happiness.

The recognition that a person can choose emotional well-being – even when life doesn't turn out the way we want it – is the cornerstone of mental health. In that sense, Rachel was ahead of the game. She was willing and ready to let go of blame and embrace responsibility for her future. The road to letting go of anger and hurt still stretched before her, enormously daunting because of the deep pain she had been carrying around for years. But Rachel had hope, and she was willing to do the work.

Hanging onto anger doesn't hurt the other person; it hurts us most of all.

Holding onto anger toward another person is like holding a sharp object in the palm of your hand. The harder you squeeze, the more you suffer. If we cast blame, saying, "He makes me so angry" or "She is ruining my life," it's like blaming the sharp object for our pain – when we're the one doing the squeezing! When we let go of anger and resentment, it's like releasing our grip of the sharp object.

Hanging onto anger doesn't hurt the other person; it hurts us most of all.

In my experience as a life and relationships coach, I’ve discovered six steps to letting go of the sharp pain and toxicity of unresolved anger, leading a person to inner peace and emotional balance.

Step One: Identify the loss

Have you ever shared a deep pain with another person, and immediately been given advice on how to overcome it? Most of us can identify the resistance we feel when we open up and are immediately told to “look on the bright side” or “think positively” or “try to forgive.” A person has to first be given unfettered opportunity to identify how they have been hurt and what exactly they feel they’ve lost.

For Rachel, it was a relief to simply put into words what she perceived to be her biggest losses: the pleasure of loving and being loved by another person; her children’s challenge to have a normal and healthy upbringing. In this first step, Rachel didn't need to shift her perspective or look at the situation differently; she needed to admit her loss and allow herself to feel it.

Step Two: Allow yourself to grieve

The Jewish laws of mourning are a wise system of graduated grief. In those first stages, the mourner doesn't respond to greetings and he remains at home. It's simply too early to offer comfort when the wound is so fresh.

Letting go of anger is no different. A person needs time to accept that the pain is real and to embrace the health that comes with allowing yourself to hurt for a while. The denial of refusing to grieve – "I am fine! I am strong! I'll get over it!" – is not an indicator of strength.

There is a saying, "Hurt people hurt people."

Once a person has gone through the first two steps of letting go of anger, they are often ready to do the difficult but liberating work of shifting their perspective. This involves the recognition that people only act very badly when they feel very badly. If someone has hurt you, take a look at their history. No doubt they were deeply mistreated themselves, and the hurtful and infuriating behavior comes from a deep reservoir of personal pain.

When we focus on the bad behavior and what the person did to us, we naturally feel resentment. But by looking beyond the behavior to see the hurt emotionally-scarred person underneath, we can replace resentment with compassion.

As long as you remain bitter and unforgiving, you're still squeezing the sharp object in your hand, blaming the object for your pain, and forgetting that you are the one doing the squeezing.

Forgiveness does not mean condoning or justifying any misdeeds. It's not rejoining with the offender. It simply means giving up your desire for revenge and letting go of the expectation that s/he will make amends. It's untying the knots that keep you emotionally entwined and prevent you from healing. It's a conscious and deliberate decision, without which a person cannot fully heal.

Everything the Almighty does is out of love, for our ultimate good and for an absolute purpose. Even in this upside-down world with seemingly so much difficulty, we can commit ourselves to looking for jewels behind the pain.

I remember pulling out a crumpled sheet of paper from my daughter's backpack. On the top of the paper, it said "I'm thankful...“ and went on to describe many different challenges we all face, and the hidden blessing underneath. It's a simple but life-transforming formula:

I'm thankful (insert a challenge you are experiencing) because it means that (insert the hidden gem underneath the struggle).

(My personal favorite is, "I'm thankful for my teenage daughter who is complaining about doing the dishes... because that means she isn't on the streets!)

Rachel came up with many hidden gems, and here is one of them:

"I'm thankful for the pain of my divorce... because it helped me understand what is important to me and what behavior I will not accept. It has brought me closer to becoming the person I know I need to be to have a healthy marriage based on mutual respect."

The last step in working through anger is to put pen to paper (if that's possible anymore!) and write a letter to the person who hurt you. Most of the time it's better not to send this letter. People who are suffering from a low self-esteem (which most offenders are) are likely to receive these words in an inaccurate and distorted way.

But there's something about spelling out hurts and frustrations that allows you to release the anger. When a person clarifies their loss, and desires to forgive and move beyond the resentment, they often feel an automatic release of the anger that has left them debilitated for years.

Rachel wrote a letter to her ex-husband, read it out loud to me, and tore it up. It was the writing, not the sending (or any expectation of response) that set her free.

We all want to be focused and capable of enjoying our lives. We want to be aware of the Almighty's loving hand, and be grateful for the infinite blessings that He constantly bestows upon us. We want to take pleasure in our children and be effective parents. We want to be an appreciative and loving spouse. We want to be a loyal friend and a productive employee.

But if we are experiencing unresolved anger, we won't be able to live out those values that are most important to us. We'll keep sabotaging those deeper relationships with anger, criticism, negativity or withdrawal.

Inner balance and personal security comes from an absolute commitment to taking personal responsibility for the quality of one's life. This includes the willingness to release any unresolved anger. Anyone, no matter what traumas they may have experienced, has the ability to get there.

Ali and her husband David are the founders and directors of L’Chaim Center for Inspired Living, a Jewish life and learning center located in Chicago, Illinois. Ali is also a passionate life breakthrough coach and can be reached at www.edenlifecoaching.org. Ali and family recently made Aliya and currently reside in Jerusalem. Ali is a great believer that it’s shame that divides and isolates us, and it’s the telling of our truth that’s at the heart of a peaceful mind, meaningful connections and happiness that lasts.

Who Are the People who Changed Your Life?
Lessons from the Book of Jonah
Where Are We? The Body, Brain, Soul Problem
Dr. Sheila Nazarian’s Escape from Iran
Comments
MOST POPULAR IN Spirituality
Our privacy policy
Aish.com Is Looking for Great Writers