Shabbat Comes to the White House 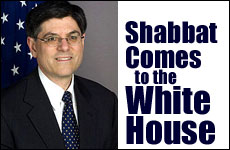 Jacob Lew is appointed White House Chief of Staff. Is that good for the Jews?

First it was Joe Lieberman gaining notoriety as an Orthodox Jew running (unsuccessfully) for Vice President in 2000. Now comes the announcement of Jacob Lew being appointed by President Obama to serve in the powerful position of White House Chief of Staff.

Lew and his wife Ruth have a home in the Bronx, where they are members of the Hebrew Institute of Riverdale. They also have an apartment in Washington and attend Congregation Beth Shalom of Potomac. They have two grown children. 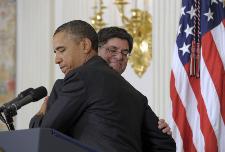 Lew observes Shabbat, which means that he leaves the office on Friday afternoons in time to get home before sundown, and for the next 25 hours does not use electricity, including the telephone.

Under the headline, "Lew Didn't Answer Earthly Authority," NBC News describes that while working for Clinton, Lew’s home phone rang one Saturday. He didn’t answer and the President’s voice could be heard from the answering machine, urging him to pick up the phone. Clinton said he understood the sanctity of the Sabbath, but that the call was important – and that “God would understand.”

Here’s the question: Is having an observant Jew in such a powerful position “good for the Jews”?

Is it good for the Lews?

Why We Still Mourn the Destruction of the Temple
Blessing on Chewing Gum
Was Rahab a Prostitute?
Extras In Our Own Epic
Comments
MOST POPULAR IN Current Issues
Our privacy policy