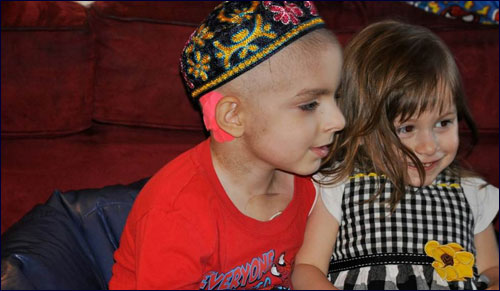 Sign this petition and help save a 6-year-old Jewish boy.

Rabbi Yaakov Cohen, his wife Devorah and their six children (now ages 2-19) came to Houston nearly three years ago to join the faculty of Torah Outreach Resource Center of Houston. Executive director Rabbi Aryeh Wolbe and the entire TORCH staff welcomed the Cohens and the family settled comfortably in the Houston Jewish community.

Then, the unthinkable happened. A series of symptoms in the couple’s young son, Raphael Elisha, led to the diagnosis of medulloblastoma, an aggressive form of cancer of the brain and spine. Initially, the now-6-year-old underwent surgery to remove as much of the brain tumor as possible, followed by radiation and chemotherapy.

For months after the surgery, because of a condition that developed as a result of the surgery, Rafael Elisha couldn’t speak, walk or eat. However, the tremendous faith and love of his family and the support of the family’s new friends and neighbors helped him fight through rehab. By the summer, he had been restored to his life as a fairly normal 6-year-old, and it looked as though the tumor was gone.

Then, in September 2012, on a routine MRI, his physicians saw evidence of the tumor’s return. 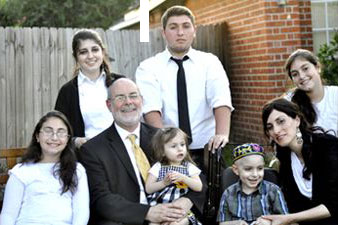 Randy Barnes, a member of Young Israel and whose family attends shul with the Cohens, has been working with TORCH, Congregation Young Israel, Congregation Beth Rambam and others to raise funds for the Cohen family. “My heart goes out to this family, and I wanted to help any way I could,” Barnes explained. “I’m as tough as the next guy, but this family’s struggle has brought many of us to our knees ... in prayer and with feelings of helplessness. This is your worst nightmare times 1 million,” he added, his voice choked with emotion.

Today, the little Raphael Elisha is stable, but very weak. “His condition is extremely tenuous, but he is fighting. He is still here,” Barnes reported. “The doctors in Houston have said there is nothing more they can do for him.”

The congregational members of the two synagogues the Cohen family attends have provided support financially as well as assisting with keeping the Cohen household operating for the five other children.

“The community has rallied around the Cohens with meals cooked each day, helping their other kids get to school and with homework and day-to-day activities,” Barnes explained. “Two women in particular – Jennifer Rosenzweig and Malka Finman – have devoted much time and commitment to the family, coordinating care so the family may continue as normally as possible while their parents make numerous trips to the hospital and maintain a bedside vigil.”

Local fundraising efforts – for young Raphael Elisha’s medical care, since insurance no longer covers this, the costs and administration of the experimental treatments, and daily living expenses for the Cohens – have gathered more than $30,000. Fundraising through challah bake sales and other activities continue.

“People are moved by the sweetness of this child’s spirit, the parent’s devotion and their refusal to give up, to give up on G-d ... and as we struggle to find meaning or something positive from such an awful situation, perhaps, maybe just maybe, this coming together of Houston’s entire Jewish community to support the Cohen family is a positive we can take away,” he said. “Obviously, the biggest positive is for Rafael Elisha to live. There are still miracles. We still believe in them and pray for them desperately.”

The greater Houston community can help with prayers and resources. “We’re trying to raise money to cover the expenses insurance now no longer covers,” said Barnes. “He had to have an MRI last week, and then there are the ongoing the expenses for a family of eight.

“I think Jews have an easy time arguing, often across our Jewish denominational culture,” Barnes pointed out. “Yet, the support Rafael Elisha has received, financially as well as moral support for the family, has crossed all denominational lines, from people who affiliate with Orthodox, Conservative and Reform, as well as those people who are not affiliated with any Jewish institution.

“I think this is a story that speaks to the beauty and unity of the Jewish community here in Houston,” he added.

After receiving the devastating news from their doctors that "there is nothing more we can do for him," the Cohens are turning to a last resort – Antineoplaston Therapy at the Burzyinski clinic. However, the FDA pulled their approval for this treatment in 2012 pending further clinical trials. Refael Elisha does not have time to wait.

The FDA has the power to approve a "compassionate use exemption" so Refael Elisha can undergo this therapy to try and save his life.

They are asking the FDA to grant this exemption so they can continue to fight for his life.

100,000 signatures are needed in order for the White House to consider this. The family requests that you sign the petition here: https://petitions.whitehouse.gov/petition/authorize-fda-grant-compassionate-use-exemption-refael-elisha-cohen-antineoplaston-therapy/BVSP1ZkW (Ed. Note: Including this request does not mean Aish.com is endorsing this treatment. We are in no position to make any statement regarding medical procedures.)

Please pass on the message to your email contacts and via social media.

This article originally appeared in the Jewish Herald-Voice

A Holocaust Survivor’s Last Request
Korach 5782: Visit to Lift the Spirit
That Time The Ivy League Found A Way To Limit Jewish Enrollment
Would You Rather Be Right or Happy?
Comments
MOST POPULAR IN Israel
Our privacy policy