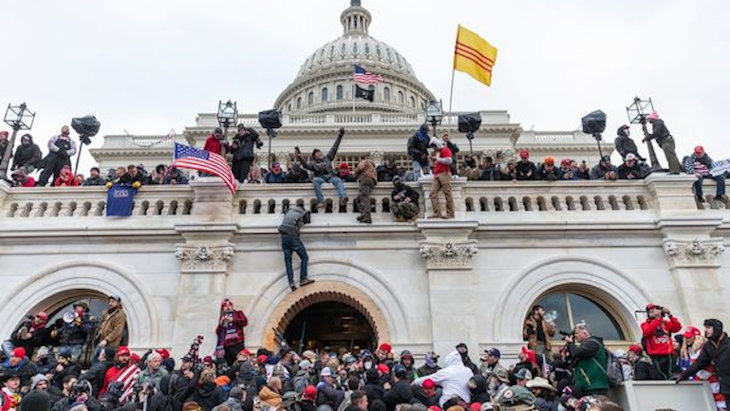 I tremble at the thought of the country perishing from within. We must find a way to return to the values and the ideals which were the original source of our greatness.

The events of the past week were the latest and most shocking demonstration of a country aflame, divided by hatred that makes a mockery of the descriptive name United States of America. After a summer of riots and protests that pitted neighbors against neighbors, friends and family against each other, it at last has come to this – an attack on the Capitol at the very moment that its elected representatives sought to carry out their constitutional duty to determine the democratically elected leader of the nation.

I tremble at the thought of this country, blessed by God as no other in recent history, being destroyed not by external enemies but – as so many empires in the past – perishing from within, a suicide of self-created madness and insanity.

We must find a way to move forward that will return us to an appreciation of the values and the ideals which were the original source of our greatness.

The miracle we need today is the one God chose as he made his first appearance to Moses and appointed him to become the leader of the Jewish people. To make himself known, God chose to appear in a bush which was burning and yet miraculously was not consumed. This was a message. Moses had fled Egypt while his people faced the flames of hatred and servitude. Perhaps, Moses feared, his people had perished. So God reassured him from the midst of the bush that a miracle of survival against all odds was possible. As long as the Hebrews continued to hold onto their belief and heard the message of the Almighty in their own lives, the fire would not be a fire of destruction.

The bush was called sneh in Hebrew. That word would give the name to the single, most important location as a source for ethics, morality and civilization. The very spot where God chose Moses and taught him the way to miraculously assure survival would later become better known as Mount Sinai – Sinai from the word sneh.

What made America different and assured its divine blessing was clearly understood by its founders.

Benjamin Franklin summarized the futility of trying to build a nation by man’s power alone, and the need for God’s assistance: “I have lived, Sir, a long time, and the longer I live, the more convincing proofs I see of this truth — that God governs in the affairs of men. And if a sparrow cannot fall to the ground without His notice, is it probable that an empire can rise without His concurring aid? We have been assured in the Sacred Writings that ‘except the Lord build the house they labor in vain who build it.’ I firmly believe this, and also that without His concurring aid we shall succeed in this political building no better than the builders of Babel.”

John Adams, in 1756, put it beautifully: "Suppose a nation in some distant region should take the Bible for their only law book, and every member should regulate his conduct by the precepts there exhibited! Every member would be obliged in conscience, to temperance, frugality, and industry; to justice, kindness, and charity towards his fellow men; and to piety, love, and reverence toward Almighty God ... What a Utopia, what a Paradise would this region be."

Here are the words from George Washington’s farewell address: “Of all the dispositions and habits which lead to political prosperity, religion and morality are indispensable supports.... And let us with caution indulge the supposition that morality can be maintained without religion ... Reason and experience both forbid us to expect that national morality can prevail to the exclusion of religious principle.”

These are the ideas enshrined in the Declaration of Independence: “We, therefore, the representatives of the United States of America, in General Congress assembled, appealing to the Supreme Judge of the world for the rectitude of our intentions, do, in the name, and by authority of the good people of these colonies, solemnly publish and declare that these United Colonies are, and of right ought to be, free and independent states; … And for the support of this declaration, with a firm reliance on the protection of divine Providence, we mutually pledge to each other our lives, our fortunes, and our sacred honor."

In all of the countless responses to the horrible events which today threaten our democracy, I do not find emphasized the words of our founders. We need to put in the forefront the idea that “all men are created equal” for it is the recognition of our shared uniqueness as creations in the image of God that requires us to come together in mutual respect and goodwill.

After last week’s tragedy, it is no longer politicians who can assure our survival. America needs a powerful affirmation of its spiritual uniqueness. It is spiritual leaders with the message of faithfulness to the ethical and moral messages of Sinai whose voices need most to be raised – and to be heard.

We need to lower the volume of hate and recrimination that blare forth from the headlines and amplify the still small voice that seeks to remind us of our obligation to see the Almighty in the midst of the flames of the burning bush. That is the vision which will ensure that we and the dream of America’s founding fathers will not be consumed.

Oh That Fifty Feeling
Scientific Curiosity and the Divine Encounter
Mind Over Milkshakes
Love the Convert
Comments
MOST POPULAR IN Current Issues
Our privacy policy
Aish.com Is Looking for Great Writers