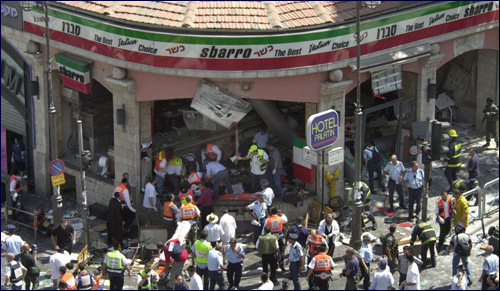 Giving meaning to memory on the yahrzeit of the horrific tragedy.

At 2 pm the popular Sbarro pizza restaurant, at the busy intersection of King George Street and Jaffa Road, was crowded with customers, mostly women, teens, and young children. 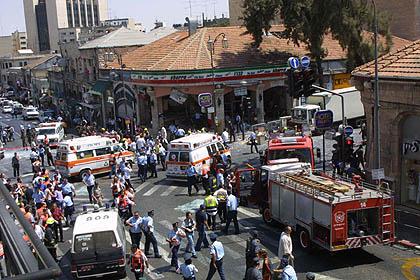 Unnoticed, an Arab terrorist entered the restaurant, his guitar case filled with lethal explosives packed with nails, nuts and bolts. Suddenly Sbarro was ripped apart, shattering the lives of many families.

A witness described the horrific scene:

There was a blast so strong I was sure the world was collapsing, then tons of glass shattered all over. There was screaming and blood, people running and people frozen to the spot. Little kids were crying for their mothers and tons of blood all over the place, it was real chaos. I remember seeing a man covered in blood, a little girl with long hair matted in blood and glass, and the smell of smoke, explosives, and human flesh all mingled together.

Fifteen innocent people were murdered. Among them were Mordechai and Tzira Schijveschuurder, originally from Holland, and three of their children, Ra’aya, 14, Avraham Yitzhak, 4 and Chemda, 2. Two other daughters, Leah, 11, and Chaya, 8, were critically injured.

The last time I saw my little brother Avraham Yitzhak, he was lying on a stretcher in an ambulance. He had a bandage on his face. He was four years old. After the explosion, I ran out as fast as I could. I didn’t look at anything. I just ran out. A medic took me to an ambulance and that is where I saw Avraham Yitzhak for the last time.

After that they took me on a stretcher to the hospital, and I had to have an operation to remove the screws that entered my liver and leg. I saw a sign on the door that said 'Operating Room' and started to cry. In my house, they are sitting shiva right now. My brothers came here with their torn shirts. I asked them: “Why are your shirts torn?” but they didn’t want to tell me that our parents were dead. My brothers had not been with us in the restaurant. They found me first. After that, they found out that my sister and my little brother were dead. My little sister had always been happy. I remember her so well. She used to laugh all day long. Now our parents are not alive either. But soon Moshiach will come and all the people that have died, and all the people killed in wars and terror attacks, will come back to life.

Prime Minister Ariel Sharon went to the hospital to visit the surviving children of the Schijveschuurder family. When he asked 17-year-old Shevuel if there was anything he could do for them, the boy replied that if the Prime Minister wished to do something in remembrance of the souls of his murdered parents and siblings, he should observe the coming Shabbat. The non-observant Prime Minister, taken aback by the request, promised to try. 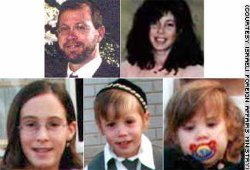 According to reports, Ariel Sharon kept his promise. Prime Minister Sharon observed the holy day of rest as best he could for the first time in his life.

He refrained from his usual round of official business and politics. He took no phone calls and did not travel.

Another person killed on that terrible day was young Malki Roth, a vivacious 15-year-old student.

In the last year of her life, Malki, a gifted musician and flute player, had written the lyrics and music of a song she planned to enter in a school musical competition. Though she completed the song and taught it to her friends, she did not 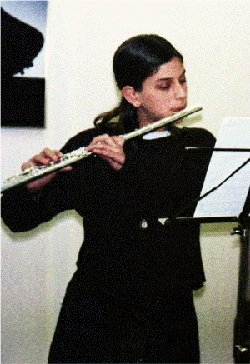 submit it in time for the competition. Like most teens, she probably thought she had all the time in the world.

Her family became aware of the song's existence only when visitors mentioned it during the week of shiva. In an outpouring of their sympathy, Malki's friends reached out across Israel during that week of mourning, teaching Malki's song to hundreds of children and teenagers in youth group summer camps throughout the country. Since then, the words and music of her song continued to spread via a network of friends in Israel and other countries.

Shir Lismoach ("A Song of Joy" - or Malki's Song) is upbeat and optimistic, like Malki herself:

In tribute to Malki's brief life, her parents, Arnold and Frimet Roth, established the Keren Malki Foundation to assist families with special needs children. Malki had been dedicated to caring for children with disabilities, inspired by her own severely-disabled sister.

Shoshana Greenbaum, an only child and devoted teacher in the US, was also killed in the bombing. The official death toll did not include her unborn baby, who would have been the Greenbaums’ first child. 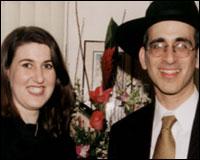 Her husband, Shmuel Greenbaum, despite his terrible loss, decided to take on a mission to spread kindness, which personified his late wife.

He met with a group of friends to discuss how to improve the world, and that was beginning of a daily newsletter called "A Daily Dose of Kindness", which grew from 150 participants to hundreds of thousands of readers all over the world.

The bereaved families felt they should try to transform the violent cruelty they had suffered into acts of compassion and significance. Despite their personal heartbreak, their strength provides us with incredible inspiration.

May the memories of those who were loved and lost inspire us to live a more meaningful, engaged life.