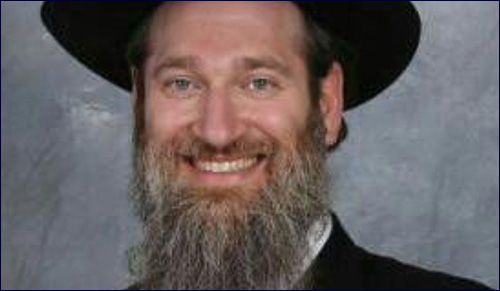 Fighting the terrorists in the Har Nof shul, he undoubtedly saved many people's lives.

Aryeh Kupinsky was a big man with a long, red beard. He towered over almost everyone. But what really made him stand out was that he always had a big smile.

Aryeh was a doer, always in motion. Long legs taking great strides, powerful arms reaching out with great sweeping gestures. And what was Aryeh doing? He was always helping someone. He lived for others. His first thought was never for himself.

Aryeh lived for others. His first thought was never for himself.

As Rabbi Jonathan Taub put it so well, Aryeh was simply incapable of being a guest at someone's simcha. If he was there early, he would single-handedly flip over tables and set them on their feet. He often did not leave until everything was put away. A friend once insisted that Aryeh sit, enjoy himself, and let those who were hired do the work. That didn't stop Aryeh from lugging in all of the cartons of drinks that he spotted outside of hall and loading them into the refrigerator.

How many times had I heard him say, "What can I do to help?"

When I first came to yeshiva nearly two decades ago, someone told to me, "Aryeh Kupinsky is a person who would do anything, for anyone, at any time." When he was a student living in a dorm, he had put up a sign, "Please borrow anything – no need to ask." Who does that?

Aryeh acted quickly and quietly. He asked for no recognition, and many were unaware of things that he had done. For example, on Tisha b'Av for years Neve has hosted a popular program featuring superb lecturers. By 2 PM everyone has gone home. Well, nearly everyone. There was one man who made sure that the Sefer Torah and two Haftarah scrolls that were used for davening were returned from the dining room to the Shul, and that the Aron Kodesh was properly locked. That was Aryeh.

Aryeh was a deeply emotional, passionate person. His passion was particularly evident when it came to learning Torah. He was a Torah scholar who loved learning. When we learned together for a brief period as study partners, he would get fired up at the drop of a hat.

The truth is that over the years, when I would meet up with Aryeh, my heart would sometimes fall. Aryeh was always bothered by something. He was constantly nursing a question in learning, turning it over, gnawing at it, trying to resolve it. And he would share it with you when he saw you. There was no such thing as, "Interesting! I'll have to think about it." Nor was it possible to simply suggest an answer. Any possible solution had to be analyzed, weighed for merits and demerits, and then discussed again. When I "didn't have the time" for this process, I would feel somewhat exasperated. How I would love to be able to experience such a delay again...

Although Aryeh was always doing for others, it did not come at the expense of his own family. He was an utterly dedicated husband and father. After leaving Kollel where he learned full time, Aryeh continued to set aside a few hours every to learn Torah as he worked, first as a Mashgiach and then in computers, to support his family. Because his wife, Yaakova, has an excellent job with great benefits – and staggeringly long hours – Aryeh took on much of the housework, cooking, cleaning, and taking care of his kids, to enable his wife to keep to her schedule. Although he had been praying for many years at Kehilas Bnei Torah, the Har Nof shul that was attacked, he had only recently switched to the 6:25 minyan in order to get home earlier and help his wife. The massacre took place during this minyan.

Two years ago, just days after Tisha b'Av, Aryeh's daughter Chaya did not wake up. She was just shy of her 14th birthday. Chaya had been mature for her age. She had been the one to shoulder much of the burden in the house, acting as almost a second mother to her siblings. After her untimely passing, her parents found personally composed prayers, pages long, which she apparently had expressed daily.

Aryeh was inconsolable after Chaya's death. Everything reminded him of her and tears were never far below the surface. For much of the next two years, the family did not eat their Friday night Shabbos meal at home, as this family time was too painful for Aryeh to experience without his beloved eldest daughter. Sitting at another family's table allowed him to mitigate some of the sorrow. Only when giving his other precious children the Friday night blessings Aryeh was unable to contain his grief and broke down with heart-wrenching sobs.

But Aryeh would not allow himself to wallow in pain. Assemblies were held in Chaya's memory, inspiring others to spiritually grow. Aryeh often said that it was a great source of comfort to him that so many people changed their lives for the better as a result of Chaya's death. Yaakova Kupinsky believes that these words, heard so often by the family, serve as a focus for them now at this enormously difficult point in their lives.

But Aryeh wanted to do more. He sought to establish something permanent in Chaya's memory. We live in a world with so many kindhearted Jews where there are literally hundreds of categories of "gemachs" – various types of free loans listed in Jewish directories worldwide. But Aryeh Kupinsky, ba'al chesed extraordinaire, managed to found a gemach so rare that to the best of my knowledge there is only one other one in existence. A freezer gemach! He purchased a number of medium-sized freezers and advertised that they would be available free of charge for use for Jewish holidays and private celebrations. He told me with a mixture of incredulity and regret that before Rosh Hashanah he had to turn down 92 applicants. Just days before Aryeh was so brutally taken from us, he was attempting to figure out how to acquire more freezers for this noble purpose.

What elevated Aryeh's gemach from merely unique to awe-inspiring, however, was the manner in which he ran it. Har Nof is built around a mountain. Every street is on another level. The entire neighborhood is made up of long, winding streets, and steep, winding staircases.

At his funeral a mutual friend told me that that he yelled at Aryeh the last time they had met. He bumped into Aryeh as he was transporting a freezer from one recipient to another, on a two-wheeled handcart. This was the only mode of transportation employed by the gemach – hand-wheeled, bumped up and down every step and along every roadway. And there was only one "employee" – Aryeh.

"Are you crazy?!" our friend asked Aryeh. "Isn't it enough that you lend people a freezer for free? Let them pay 50 shekel for delivery!"

Aryeh recoiled. "This is my chesed (my opportunity to do an act of kindness)!" he protested.

On that fateful Tuesday morning when the men praying became aware of the evil terrorists, they ran for their lives. Not so Aryeh. Numerous reports have Aryeh screaming at everyone in the shul to run, while he made sure that they could. He hurled shtenders, chairs, siddurim – whatever came to hand – at the terrorists to distract them, at one point physically restraining one of them. There were others who followed his example. After taking multiple blows – some intended for others – Aryeh fell. There is no doubt that he saved people's lives.

There was an unexpected delay when we arrived at his intended burial plot in Har HaMenuchos where Ayreh's daughter, Chaya, is buried. The gaping hole in the ground was not quite long enough. We waited in the dark while the Chevra Kadisha took out their tools, and finally the earth reluctantly took Aryeh back.

Aryeh Kupinsky was indeed a big man. But his heart was ever bigger.

Donations for the families of the victims can be made through the following link: http://www.harnofonline.com/terrorfund.aspx

Rabbi Moshe Cohen hails from Baltimore. He is an alumnus of Ner Israel Rabbinical College, Mesivta of Long Beach, and he spent a brief period in Beis Medrash Gavoha. For the past eighteen years he has been a Talmid of R' Tzvi Kushelevsky, Rosh Yeshiva of Yeshivas Heichal ha'Torah in Jerusalem. He teaches in Machon Yaakov in Har Nof, where he lives with his family.

Funeral for Baruch
Blessing on Chewing Gum
Was Rahab a Prostitute?
Extras In Our Own Epic
Comments
MOST POPULAR IN Israel
Our privacy policy