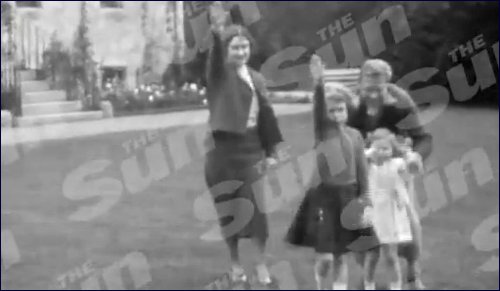 Don’t let an 80-year-old photo distract you from the real threats affecting the Jewish people today.

The scene is a family gathering in the mid-1930’s. Two young girls dance together on a lawn, while their mother and uncle look indulgently on. Their uncle crouches down and encourages the girls to raise their right arms to the camera; their mother follows suit. Soon, the whole family is giving a Nazi salute, grinning at the viewer.

The image is disturbing, and becomes even more so when it becomes clear the older of the two girls in the home video is Queen Elizabeth II of Britain, and the uncle urging them in front of the camera was none other than King Edward VIII, who met with Hitler and notoriously harbored sympathy for Nazi Germany. Britain's Sun newspaper released the 17 second video on their website and put a still on their front cover on Saturday, July 17, 2015. "Their Royal Heilnesses" blared the headline, above a picture of Britain's smiling royal family performing Nazi salutes.

This embarrassing footage comes ahead of more potential humiliation for the Windsors, as Britain's Channel 4 announces plans for a forthcoming documentary about the Queen's husband Prince Philip and his family's Nazi links. His parents, Prince Andrew and Princess Alice of Greece, were early admirers of Hitler, entertaining him at their flat. Although the couple eventually turned against Nazism (Alice even rescued a Jewish family in Greece, hiding them in her home during World War II), three of Prince Philip's sisters married Nazis, and various other members of Britain's extended royal family expressed sympathy for Nazism throughout the 1930s.

Buckingham Palace and other British institutions have moved swiftly to perform damage control. Queen Elizabeth is said to be "livid", and has instructed her staff to investigate possible legal action. The Palace issued a statement stressing the queen's youth in the video and her 63 years of service to the nation. The London-based Board of Deputies of British Jews also defended the monarch, saying it was not "remotely appropriate" to judge a seven-year-old's actions.

It's easy to sympathize with Queen Elizabeth: it seems unfair to try to humiliate an elderly woman by implying she's responsible for a home video filmed 80 years ago. Some outraged British citizens have even called for Sun owner Rupert Murdoch to be banned from entering the country.

It would be a shame if this scandal and the outrage it's causing distracted attention from real instances of Nazism and other threats to Jews today.

Shockingly, the Nazi ideology of the one-armed salute that's so embarrassed Queen Elizabeth is alive and well and gaining adherents throughout Europe.

Throughout Europe, neo-Nazi parties are on the rise. In Hungary, the openly neo-Nazi Jobbik political party gained 20% of the vote in general elections in 2014; its leaders sport Nazi-style black uniforms and have called Jews a "national security risk" for Hungary and advocated setting up detention camps for Gypsies. Greece's fascist party Golden Dawn became that nation's third largest party in elections in January 2015. Nine different fascist parties from various European countries sit in the European Parliament, democratically elected and spreading their foul ideology throughout Europe and beyond.

The Nazi salute is spreading unofficially, too. Although the traditional Nazi salute is banned in many European countries, the "Quennelle" - a sort of inverted Nazi arm signal popularized by the virulently anti-Semitic French entertainer and activist Dieudonne M'bala M'bala - has become a ubiquitous symbol, performed by public figures and ordinary people alike. Valerie Fourneyron, France's Sports Minister, in 2014 tried to counter those who claimed it was merely a gesture of free speech: "The Quennelle is a Nazi gesture that is clearly anti-Semitic." This salute has nevertheless continued to gain popularity.

It's not only neo-Nazis that pose a risk to Jews. While the pictures of Queen Elizabeth were being debated, Britain's Prime Minister David Cameron was highlighting a current threat to Jews: virulent anti-Jewish conspiracy theories among British Muslims. Cameron pointed out that many people in Britain today erroneously believe that "Jews exercise malevolent power" and are willing to consider violence against the Jewish community, posing a grave risk both to British Jews and the national at large.

Muslim hatred of Jews has perhaps most openly been expressed by Iran, which has repeatedly threatened to wipe the Jewish state "off the map", and continues to call for Israel's destruction while the international community debates the merits of the anti-nuclear agreement.

Focusing on these threats is difficult, but imperative. We must stand up to anti-Semitism and confront threats to Jews and others. The photo of Queen Elizabeth as a little girl is a distraction. We need to focus our energies and time on the many pressing issues that are calling out for our attention right now.

Five Lessons from the Paris Attacks

Three Days at the Bottom of the Ocean

Why Iranian Judo Athlete Dedicated His Silver Medal to Israel
Should I Break Up, Get Engaged or Keep Dating?
Time Is Your Precious Commodity
A Constant World in Flux
Comments
MOST POPULAR IN Current Issues
Our privacy policy