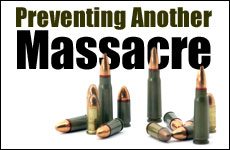 It is remarkable how confident so many people are that they know what causes – and just how to prevent – horrific massacres like Friday's bloodbath at Sandy Hook Elementary School in Connecticut.

In a TV interview over the weekend, one observer insisted that the mass-murder in Newtown was all too predictable, given America's failure to implement an obvious and desperately overdue reform. "Should we be so surprised that schools would become a place of carnage?" this individual demanded, showing no hint of uncertainty about exactly what needs to be fixed.

Was it Chicago Mayor Rahm Emanuel, amplifying his call for Congress to take a "vote of conscience" and enact a nationwide assault-weapons ban? Or the Washington Post's Eugene Robinson, who excoriates "the National Rifle Association and other apologists for murder" for resisting more aggressive gun control?

Was it Connecticut's departing senator, Joe Lieberman, resurrecting his longtime warning that the brutality that pervades American entertainment "does cause vulnerable young men to be more violent"? Or presidential adviser David Axelrod, enlarging on a plea he posted on Twitter: "All for curbing weapons of war. But shouldn't we also quit marketing murder as a game?"

Was it Liza Long, whose blog post about her son's psychiatric problems – "I Am Adam Lanza's Mother" – went viral, leading to an appearance on NBC in which she argued that the way to deal with mass shootings is to deal with madness of potential perpetrators: "It's easy to talk about guns but it's time to talk about mental illness."

Was it former Education Secretary Bill Bennett, who contended on Sunday that the most effective means to prevent Newtown-style bloodbaths might be to ensure that school employees are armed? Was it Larry Pratt, head of the 300,000-member Gun Owners of America, decrying gun-free zones as a "lethal insanity" that gives homicidal gunmen an unconscionable advantage over their victims?

In reality, it was former Arkansas Governor Mike Huckabee, who asserted within hours of the atrocity in Newtown that 26 innocent souls perished because "we've systematically removed God from our schools." If only Americans would let God in "on the front end," said Huckabee, schools ravaged by murder wouldn't need Him so often "on the back end."

It was a graceless thing to say, and Huckabee was rightly criticized for rushing to exploit a ghastly horror in order to promote his particular agenda. But Huckabee was far from the only offender. In the wake of Newtown there was no end of sanctimony from politicians and pundits who declared not just that America must do something to avert such terrible killings, but that they know precisely what that something is: More gun control. Less gun control. Better screening for mental illness. Restoration of school prayer. No media publicity for mass killers. A crackdown on hyperviolent video games. Armed guards at schools.

How can such terrible evil be thwarted? The desperate need for answers – better yet, for an answer – is always palpable after a Newtown, an Aurora, a Columbine. That urge to turn back cruelty, to find effective responses to anguish and pain, is so intensely human. The yearning for an end to suffering runs deep in our species, and at its best has been a powerful force for justice and progress. "We can't tolerate this anymore," President Obama said in Connecticut on Sunday. "These tragedies must end." At the level of heart and gut, who doesn't share that feeling?

Ultimately there is only one answer: the cultivation of human goodness.

But tragedy will always be part of the human condition. Some evils we can never hope to eliminate – not even with the best will in the world. No regulation or reform can undo all homicidal insanity. Still less can legislation guarantee universal integrity and decent character. It will always take more than law and politics to make men and women kind, honest, and moral.

None of the nostrums prescribed after this year's shooting rampages in Connecticut and Colorado would guarantee that nothing like them will ever recur. Stringent gun laws haven't prevented frightful massacres of students in Norway, Germany, and the United Kingdom. There were mass killings in America long before there were video games – and long before the Supreme Court ruled prayer in public school unconstitutional.

Nightmares like the one in Newtown are rare. Yet a free society cannot make them absolutely impossible and still remain free. Good laws can do a lot, but they will never abolish all human evil. For that, there is ultimately only one answer: the cultivation of human goodness.

You Didn't Build That

Just Listen, Will Ya?
Bechukotai 5782: Divine Retribution
Behar 5782: Working to Live or Living to Work?
The Wholeness of Being Broken
Comments
MOST POPULAR IN Society
Our privacy policy