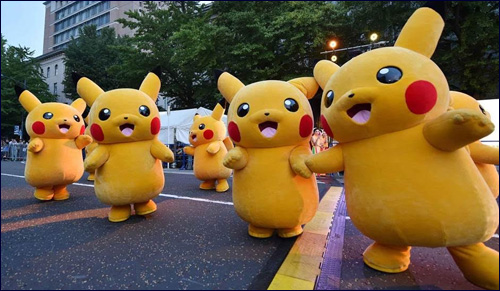 Living in an augmented-reality universe.

There is a reason why a group of excited teens peering into their smartphones are converging in front of an office building or a park. They are part of the Pokemon Go phenomenon that has taken the world by storm. Suddenly everyone is wandering the streets in search of the hidden monsters.

This “augmented reality” game has such an exciting appeal because it brings the fictional world of gaming right into your world. Your surroundings are literally transformed into the game board and you are thrust inside the action, seeing through the screen of the smartphone things that the naked eye cannot see, maybe even a rare sighting of Pikachu. A walk down the street becomes an adventure of battling bad guys, capturing monsters and climbing from level to level. Mundane daily life is transformed into an epic quest.

For over 2000 years, the Jewish people have lived in a state of “augmented reality”.

For over 2000 years, the Jewish people have lived in a state of “augmented reality”. To the untrained eye, the Jews may seem to be randomly wandering through history, exiled and persecuted, chased from one country to another, hoping they could finally live at peace and build a thriving Jewish community there.

But the Jew is like the Pokemon player who knows that as he travels the world, his smart device will reveal the surrounding hidden monsters for him to capture in order to advance to the next level. With his well-developed awareness of our Jewish destiny, the wandering Jew knows that as he travels from place to place, each stop will contain its own hidden “monsters” in the form of the unique challenges to overcome as part of the mission of the Jewish people.

It is known the concept of exile is so that the Jewish people can elevate the sparks of holiness that they discover among the nations. When there was a Temple, all holiness would be drawn from around the world and concentrated in the Land of Israel. But when the Jewish people sinned and fell from that level, they needed to go through exile in order to bring back all of that holiness. As we see throughout our history in Exile, many countries give us permission to live amongst them for many years, and then suddenly turn against us into our enemies and evict us from their land. The reason is that after we complete our mission in that pace, it becomes our mission to go elsewhere to complete our mission there. (Ohr Gedalyahu)

The Jew in exile experiences a different reality than everyone else. As he wanders from place to place, remaining true to his mission and connected to the Torah and the Jewish people, he is actually “capturing” the potential positive forces that exist in those places and returning them to their holy source, bringing us one step closer to Jerusalem.

We are now starting the mournful period of The Three Weeks that culminates with Tisha B’Av, marking the destruction of the Temple in Jerusalem and exile from our land, our spiritual goal is to strengthen ourselves as we reflect on the past two millennia in Exile and all we have been through. It is a time to remind ourselves that even though we have faced so many challenges and sometimes seem to be so far away from where we would like to be as the Jewish people, every occurrence throughout our storied history is part of an epic quest that comprises God’s master plan to bring us back home as an even stronger people.

Both the Pokemon player as well as the wandering Jew see a different reality, they are in tune to the challenge at hand that only they can see, and they don’t lose sight of the goal of conquering challenges and bringing to fulfillment the mastering of their epic quest.

Where Do the Jewish People Get the Strength to Go On?

The Synagogue Attack: But It Couldn’t Happen Here

Being British for 350 years
It Takes A Lot Of Faith To Be An Atheist
How Instagram Brought Back This Nostalgic Soup
What Makes Eli Run?
Comments
MOST POPULAR IN Israel
Our privacy policy