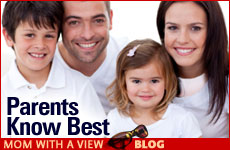 Protect us from those well-meaning friends, teachers and therapists who think they know our children better than we do.

Remembers the moment in Fiddler on the Roof when the rabbi is asked if there is a blessing for the Czar? “May the Lord bless and keep the Czar – far away from us!” is the impassioned and clever rejoinder.

I would like to suggest a similar blessing for a very different situation. “May the Lord bless and keep far away from us all those ‘well-meaning’ friends, teachers, principals, doctors, neighbors, therapists who claim to know our children better than we do and then proceed to give them potentially destructive advice.”

Our children present a different picture outside of the home than they do inside. In general, that’s a good thing. The petty squabbling and the screaming fights, the jealousies and insecurities usually remain behind closed doors. That’s the way it should be. It’s usually a sign of healthy socialization. It demonstrates an appropriate sense of boundaries. It’s even reassuring to parents that everything is basically okay.

All children have some struggles with their parents and siblings. With the constant contact and sometimes conflicting needs, it’s inevitable. And home can be a safe place to work through issues and sometimes even let out frustrations. It’s a place of security and love.

Quite often their advice is based on a flawed picture of the child and the situation.

It also means that parents frequently see a side of their children that the rest of the world rarely, if ever, does. It means their teacher’s perspective is limited. It means their neighbor’s view is one-dimensional. It means the therapist only hears half the story, if that. And it means their advice is based on a flawed picture of the child and the situation.

Unfortunately that rarely stops these individuals from advising other people’s children (i.e. ours) to change schools, abandon their friends, end their romantic relationships, and ignore their parents’ wishes. All without a full appreciation of the consequences. All assuming that they know best. All under the illusion that they are better equipped than the parents to deal with the situation. All while knowing that they will not have to be the ones to pick up the pieces.

It’s incredible chutzpah. And I have heard a lot of stories lately…

A teacher told an acquaintance of mine that her daughter’s friends were a bad influence and proceeded to encourage the girl to end all contact with this crowd. Seeking her teacher’s approval, the daughter did so. Unfortunately the teacher’s advice was missing a few key points of understanding – a recognition of the limited options for this girl in her neighborhood and a prescription for a healthy way to fill the gap where her friends used to be. Into the vacuum walked a much worse crowd, one heavily involved with smoking, alcohol and drugs. The parents are beside themselves trying to deal with their new challenges, in a situation that could and should have been avoided. We know the teacher meant well but…

Another friend has a son who is struggling in school, trying but struggling. The parents were very supportive and he has tutors and other professionals helping ease his way. But the principal felt that the boy was a drain on their (very) limited resources and wanted him out. Without consulting the parents, they began to discuss an out-of-state school with the boy. The child was excited about the possible adventure and opportunity ahead but the parents were flabbergasted when they found out.

The school hadn’t asked to see the therapist’s recommendations, one of which was the boy should remain at home as long as possible. They hadn’t looked into the family’s financial situation to see if this school was a reasonable possibility. Now they have created additional tension in the boy’s family. He now feels his parents aren’t on his side because they won’t send him away and the parents are furious with the principal for his overreach.

In an even more egregious example, my friend’s son was about to get engaged. He was feeling very nervous about it (Yes, boys get nervous too!) and went to speak to one of his teachers. The boy was a bright, competent, young man and his anxiety seemed out of character. His teacher took it as a sign that there was something wrong with the match and suggested he break it off rather than go forward.

The parents were outraged. The teacher had only seen one aspect of their child. Only his parents and some of his siblings were witness to his expression at home of his fears and insecurities. In their view, his behavior was not out of character in the slightest. Luckily they prevailed (although not without a struggle) and their son is a happy, thriving father of five. He often tells his wife how grateful he is that he didn’t listen to that teacher! And his parents concur.

We need other people and other perspectives, but as parents, we also need to trust our instincts and our knowledge of our children. We also need to use these stories and our own experiences to shape how we address other parents.

Learning from these examples, we need to be so sensitive and so thoughtful. In fact, we basically need to keep our mouths shut. And if there is a situation where we feel unable to exercise that level of self-control, we need to pray that the Almighty gives us the wisdom to tread carefully and the words to be effective and kind.

My Most Important List
The Nobel Prize-Winning Neuroscientist Mussolini Couldn’t Stop
The Beauty Queen of Jerusalem: 6 Jewish Communities Who’ve Long Called Jerusalem Home
Why We Let Our Kids Draw on the Walls
Comments
MOST POPULAR IN Mom with a View
Our privacy policy