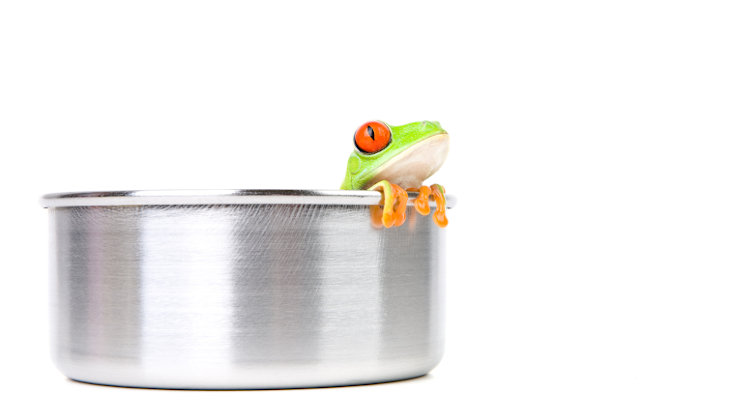 We are watching, listening to, reading and emailing things that just a few years ago we would have blushed and been ashamed to do.

The annual No Pants Subway Ride recently took place in cities across 25 countries around the world. This outrageous “tradition” began in 2001 and was introduced by the group “Improv Everywhere,” who thought it would be funny and entertaining for people around the world to ride public transportation without pants, no matter the weather and without concern for the sensitivities of fellow passengers.

When it comes to striving for holiness and wholesomeness, I wonder if we are like the frog in a pot being slowly boiled to death. We are wearing, watching, listening to, reading, speaking, and emailing things that just a few years ago we would have blushed and been ashamed to do.

We are living in a world with fewer boundaries and the disintegration of limits. People are fighting for the right to walk around in whatever state of dress or undress they please. Billboards, posters, signs, advertisements, and banner ads relentlessly place images before our eyes that are designed to be enticing, alluring, and tantalizing. Television shows that include themes, relationships, language, and images that once upon a time would have be relegated to seedy cable channels and appear in the middle of the night are now part of mainstream TV that families watch together and whose reruns play during dinner time.

This didn’t happen overnight; it is the product of a slow but steady moving of “the line” over decades. Society around us is changing, and unless we conscientiously distinguish ourselves in our pursuit of sanctity, we are going to spiritually boil to death.

In pledging to redeem us from the servitude of Egypt, God promises to extract us from "sivlot mitzrayim," classically translated as “from under the burdens and bondage of Egypt.” However, the Chiddushei Ha’Rim explains that sivlot comes from the Hebrew word savlanut, patience. So the sentence can be interpreted to mean: I will redeem you from your patience and from a willingness to endure the hedonistic and decadent culture of Egypt.

Redemption came through reaching a place of being disgusted and repulsed by the degradation and defilement of Egypt. When we no longer had savlanut, patience and tolerance for the culture of Egypt, is when we were on your way to redemption and to a life of kedusha, holiness.

David Brooks writes, “We don’t live for happiness, we live for holiness.”

Yes, patience is a virtue but it's time to be fed up with allowing ourselves and our standards to be defined by pop culture, the fashion industry, advertising agencies, Hollywood writers, and segments of society that tout progressiveness, when in fact, they are bringing society backwards, not forwards. We need to lose patience with the unhealthy viruses that have been introduced into our moral system and elevate ourselves above them.

In his book The Road to Character, David Brooks writes, “We don’t live for happiness, we live for holiness.” The world around us keeps telling us we deserve to be happy and to do whatever we want towards that end, as long as it doesn’t hurt others. But as Brooks says, people who subscribe to this philosophy are missing the key ingredient for a life of virtue and character. It isn’t happiness we live for; it is a life of holiness.

We need to revisit the temperature of the water in our pot and how it is affecting our souls and our lives and recommit to seeking holiness in our lives.

Guarding our eyes and protecting ourselves from vulgarity has always been a challenge, but it has never been nearly as difficult as it is today. It is not just the ease of access to graphic material due to the explosion of electronic devices and the proliferation of the Internet, but it is the larger issue that we live in a society that has utterly erased the taboo and stigma once associated with possessing and viewing it.

We are all human, we all have moments of weakness and areas to work on. But what happened to being embarrassed or ashamed of doing things that are beneath us? What happened to keeping it private, personal, and to ourselves?

Rav Avraham Yitzchak Kook writes (Orot Ha’Kodesh, 3:296) of a time when the world will look with great admiration and awe at the Jewish people’s quest for purity. Jews have given the world great technological advances and medical breakthroughs. The time has come to give an example of what it means to participate in and contribute to the world around us, without compromising or conceding our standards of and pursuit of holiness and wholesomeness.