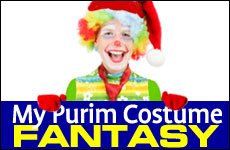 This year, finally, my family will join the ranks of those paragons of virtue, those models of creative efficiency: The Ones with the Themes.

Every year around this time I begin to look at my children appraisingly. I assess them, like a census taker for gender, height, weight and coloring. Then, armed only with a pen and a pad and the workings of my agitated mind, I sit alone in a room and think.

I am thinking, of course, of Purim costumes. And how this year, finally, my family will join the ranks of those most organized of families, those paragons of virtue, those models of creative efficiency: The Ones with the Themes. This year, I resolve, my children will be dressed in unison, my mishloach manot foods will match their costumes and the whole pretty package will be topped off with a perfectly rhymed poem, explaining the relevance of this theme and how it ties into both medieval Shushan and today.

Then after some hours of feverish scratching and scrawling in the darkened room, I emerge with my notebook and my list of idea. “Hi guys!” I call brightly to my children in the kitchen. They look at me suspiciously. They have calendars and they know what time of year it is. “So, listen up,” I say undaunted by their narrowed eyes. “I’ve got some ideas for Purim costumes here!”

Then I clear my throat and begin to read. “So what do you say, we can be Indians or cowboys or a baseball team! Animals in the zoo! Different types of shampoo! Girls dressed as boys and boys dressed as girls! All the different blessings! The seasons of the year! Pandas and kangaroos!"

There is silence at the table. I realize that I am shouting and my children look a little frightened. I take a deep breath and begin my sales pitch again. “We can be bees and flowers! We can hand out honey! Or exotic vegetables! Or circus performers!”

There is no response. “What about types of law enforcement!” I call out desperately, my eyes darting from side to side. “Or characters from Tanach! Major household appliances! Continents of the world! What do you say guys?” I am hoarse by now and the list is almost finished.

“Come on kids,” I plead and I turn to my husband for encouragement. His lips are pursed and he shakes his head sadly. Then silently but decisively he turns his back and begins to wash the dishes. I scowl at his back. Stick in the mud! Party Pooper! I can see that I will have to go it alone.

“Come on you guys,” I say again, weakly.

“I want to be a butterfly!” my three-year-old says.

I sigh. “But you were a butterfly last year."

“I know,” she answers, smiling proudly, “and I really, really liked it.”

“And I want to be Queen Esther,” says my six-year-old.

A puzzled look crosses my daughter’s face. “No, Mommy,” she says gently, slipping her little hand in mine. “People are not washing machines. People use washing machines for clothing. See?”

I have just been schooled by a six-year-old. I nod glumly.

“And, I’m gonna be a soldier,” my eleven-year-old says. He is bored with this conversation. He’s heard it repeated every year since he was born.

“How about a quarterback instead?” I ask, thinking wistfully of the gigantic shoulder pads still sewn into my Sheva Brachos outfits.

“It’s okay,” I whisper, although it is not and I think spitefully of all the things I’ve done for them over the years. Can’t they do this one little thing for me?

I turn to my nine-year-old, my easy going, pliable boy. Happy go lucky, accommodating, willing…. In short, my last hope. “What do you say sweetie?” I ask. “Wanna be a Chinaman?”

And his eyes are so soft and so kind as he looks at me. And his voice is so gentle and so sweet as he says, “I really want to be a pineapple.”

A pineapple? Who wants to be a pineapple? I wonder. And how is that better than a knight or a Chinaman or a dishwasher or a quarterback? But I am a grown up now so I don’t say everything I think. I only sigh and get to work manufacturing the necessities for soldiers and butterflies and pineapples and queens.

I look at my children’s shining faces, their eager pride, their joyous sense of self and I know that I did the right thing.

And on Purim when the families with the themes come to my door all dressed in their matching orangutan outfits, I suffer a pang of jealousy. Then I turn from the door and I look at my children’s shining faces, their eager pride, their joyous sense of self and I know that I did the right thing. Because flitting around my house is the most delicate butterfly, the most beautiful queen, the sweetest pineapple and the bravest soldier.

And really, who wants a bunch of orangutans anyway?