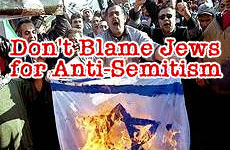 Anti-Semitism, far from being a product of the Mideast conflict, is increasingly a cause of it.

Reprinted with permission from The Jewish Week

It was probably inevitable. Amid the greatest explosion of anti-Semitism since the 1930s, several key Jewish figures (and non-Jewish critics) have now suggested that this upsurge of hatred is a product of the Sharon government's policies. Most notable were international financier George Soros and former Israeli Prime Minister Shimon Peres.

Some have claimed that these comments reflect the health and openness of Jewish life and should not be viewed with disdain. Is it not healthy for a community, they say, to look at its own responsibility?

Of course, there is no shortage of debate within Israel and beyond over the wisdom of any Israeli government's policies. It is vital that there be continuing options presented to Israeli leaders and the public, particularly because solutions have not been reached, not only for peace but for security as well.

That being said, there is a dramatic difference between raising questions about current Israeli policies and framing the explosion of anti-Semitism in the Islamic world and Europe in terms of those policies. Indeed, the true linkage of anti-Semitism to the Israeli-Palestinian conflict is the opposite of what Soros and Peres maintain: It is the hatred reflected in anti-Semitism that has made the Israeli-Palestinian conflict even harder to solve. Anti-Semitism, far from being a product of the conflict, is increasingly a cause of it.

Not surprisingly, many Jews are distressed by this tendency, now spilling over to our own community, of blaming Jews for anti-Semitism. That is why I have called Mr. Soros' comments obscene. But there is something far more at stake here than emotions. At play is the sense of purpose needed to do what has to be done about this new anti-Semitism.

This new anti-Semitism is the greatest threat to the Jewish people since the days leading up to the Holocaust.

Make no mistake about it, this new anti-Semitism is the greatest threat to the Jewish people since the days leading up to the Holocaust. It has within it the key components of that great catastrophe: an ideology of hatred that takes over millions of minds and hearts; a military capability to inflict huge casualties; and the complicity of leaders and individuals.

Millions of Muslims believe they are the victims of Jewish control over international policies and economics. Mahathir Mohamed of Malaysia knew to whom he was speaking when he told the Islamic Conference that "Jews rule the world by proxy." Whether it is Holocaust denial, blaming the Jews for 9-11 or the second dramatic presentation in a year on Arabic television based on the legitimacy of "The Protocols of the Elders of Zion," Muslims -- like Germans in the '30s -- are being told day in and day out that they are the victims of the all-powerful Jews.

This ideology of hatred, combined with the designs of the terrorists to develop delivery systems for weapons of mass destruction, poses an unprecedented threat to Jewish communities around the world.

Into that mix, the essential ingredient is whether there will be complicity with these evil intentions or whether this time the nations of the world will stand up. The tragic weekend of the Istanbul synagogue bombings and the arson of the French Jewish school offered hope that counteraction was in the offing. Turkish Prime Minister Recep Tayyip Erdogan's reaction to the bombings -- that they were not anti-Semitic, not anti-Turkey, but anti-freedom and democracy -- offered hope that leaders are beginning to understand that anti-Semitism is truly the canary in the mine shaft.

When President Jacques Chirac described anti-Semitism as a serious threat to France, there was hope. When Tony Blair was asked if British citizens died in Istanbul because of Britain's support of America in Iraq and he responded that the cause of terrorism is the evil of the terrorists, there was hope.

It will be a major struggle, led by the United States and supported by American Jews, to broaden and deepen the understanding that anti-Semitism is part of the assault on the Western world by Islamic extremists that threatens us all. At this moment when the Western world is beginning to wake up to the meaning of anti-Semitism, it is uncommonly destructive to give an out by suggesting that in fact the blame lies with the Jews.

Let's be frank. These charges are not true and they can seriously undermine our common struggle. Yes, they are obscene.

Abraham H. Foxman, national director of the Anti-Defamation League, is the author of Never Again? The Threat of the New Anti-Semitism (HarperSanFrancisco, 2003).

The Pope who Printed the Talmud

My Inspiring Uber Ride in LA

Being Jewish: Why Bother?
In the Shadow of David and Goliath
Where Do the Laws of Nature Come From?
Saadiah Gaon, Rashi and Maimonides: How Three Rabbis Revolutionized Judaism
Comments