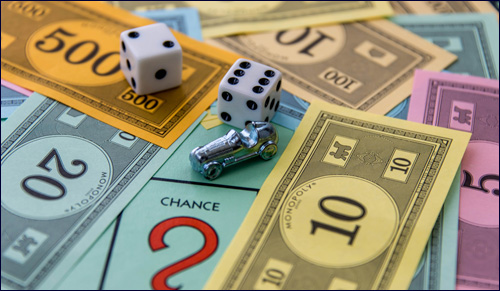 Give 10% of all Monopoly income to the Free Parking pot.

One third of annual charitable giving happens in December. Why? Ostensibly, the end of year deadline for tax benefits wakes donors up. A recent Monopoly game with my kids reminded me of additional reasons to prioritize the giving of tzedakah.

Our sages determined that 10% (ma'aser) of our income is the proper amount one should give as tzedakah, and that the fulfillment of this mitzvah brings great reward. Aside from elevating our character and bestowing spiritual merit, the sages attest that giving tzedakah actually strengthens and expands the foundations of our material wealth.

In our recent game, I built hotels on the lucrative green and blue monopolies and awaited their demise. Almost miraculously, though, their rolls of the dice landed on everything but the string of five hotels – six times in a row. I was annoyed.

My oldest said to me calmly, “I am very careful to give ma’aser on everything we make. Are you?”

His gentle rebuke gave me pause. Jewish wisdom teaches that giving tzedakah affects one’s income, but why? Is it some kind of cosmic property insurance? Does God owe favors to those who help the needy?

Our sages say it’s simpler than that: giving is simply the mechanism whereby the world’s abundance is replenished.

Imagine the farmer throwing a seed in the ground, explains Rabbi Avrohom Chaim Feuer in The Tzedakah Treasury. To one unfamiliar with how planting works, it looks as though he’s wasting small but edible food. But one who understands agriculture knows that though the seed rots, it’s not lost. It produces an abundance in its stead. This is not a matter of faith; it’s axiomatic that planting reaps produce far beyond than the quantity planted.

What planting is to produce, giving tzedakah is to prosperity. When we “give away” our assets in supporting those in need, they’re not lost. They enter into God’s cosmic system of wealth regeneration and seed the basis for extraordinary prosperity. It’s just how God designed the world. As the prophet Hoshea put it, “Plant for yourselves tzedakah; you will harvest according to your giving.”

This also explains the connection between the Hebrew words for tithe (“ma’aser”) and wealth (“osher”), two words that share the same Hebrew root. Say the sages, giving a tenth of your income is synonymous with cultivating wealth. Every act of giving is not only a gesture of seeing and caring for the needs of others; it’s also an act of faith, of trust in a Creator who designed His world to run on kindness.

Over the next few days, millions of folks around the world will be giving billions of dollars to charity. Not only will they be grabbing tax breaks, they will be planting a portfolio of plentiful returns.

Purim & the Dress that Took Over the Internet

The Challenges of Suffering
Is Grease the Word?
Dried Fruit Compote
Scientific Curiosity and the Divine Encounter
Comments
MOST POPULAR IN Current Issues
Our privacy policy
Aish.com Is Looking for Great Writers