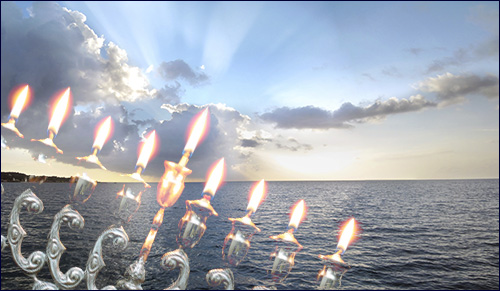 Like the days of Hanukkah, we are witnessing miracles today.

Jews certainly believe in miracles. We even have holidays commemorating them.

Hanukkah is one of them. The other one is Purim. On both we recite a prayer – Al Ha’nissim - in which we give thanks to God for having been privileged to witness them. On both we make a special blessing expressing gratitude to “the Lord our God who performed miracles for our ancestors in those days, at this season.”

Obviously miracles aren’t something we should take for granted. Religious response requires verbal expression. And yet there’s something very strange about the fact that it is only on these relatively late and non-biblical holidays of Hanukkah and Purim that we specifically emphasize miracles.

Surely Passover should have deserved Al Ha’nissim. The story of the Exodus was filled with miracles. The ten plagues, the splitting of the Red Sea for the Israelites, the subsequent drowning of the Egyptians on what had just moments before been dry land – these were all remarkable events clearly giving witness to miraculous divine intervention. But the liturgical formulation acknowledging miracles makes no appearance on this holiday. We don’t recite the blessing that focuses on miracles.

The same is true for Shavuot when the children of Israel amazingly stood under the mountain of Sinai suspended over their heads and not only heard but marvelously saw the words of God as they received the Ten Commandments. That holiday, too, has no Al Ha’nissim. Nor does Sukkot, commemorating the survival of the Jews as they wandered for 40 years in the desert, sustained only by miraculously granted food and water and protected by divine clouds of glory.

Why do we recognize the miracles of Hanukkah and Purim in a different manner than the biblical miracles?

The answer goes to the heart of a remarkable distinction Judaism made between two kinds of miracles. The world acknowledges supernatural miracles performed by God; Jews acclaim miracles that result from super human efforts of mankind as well. It is not only God who is capable of unimaginable achievements, accomplishments for which only the word miracle would suffice. God’s creations can also rise to inconceivable heights of grandeur, of moral perfection, of spiritual fulfillment – and when they do, that is a miracle which in a certain sense may even outweigh the miracles whose source is Divine.

In a certain sense, when God does something to override the laws of nature, that for Him is not difficult. God can do anything. In the Passover story, though the waters of the Nile were normally pure and potable, God was easily able to turn them into blood and make them undrinkable. The first plague, as well as the others which followed, were not really great challenges for the Almighty. And just as God normally separates sea from dry land, he was effortlessly able to alter its course - as he did for the Israelites and for the Egyptians at the Red Sea. God’s works are comprehensible simply as manifestations of his power. What God did may appear as miracles in our eyes but for Him they were easy. It is man’s miracles however which rightfully deserve our greatest awe and respect.

And these, the miracles of human beings, are the reason for the emphasis on miracles in the holidays of Hanukkah and Purim. They speak of historic moments when people rose to the challenge of living up to their potential, of attaining spiritual heights that transcend the expected, of human beings creating real miracles because they used their God-given gifts of courage, faith and wisdom.

Our role on earth is not simply to pray for a miracle but rather to be a miracle.

The book of the Bible that tells us the story of Purim is unique in that God’s name does not appear even once. God remains hidden. It is Esther, after whom the book is named, and her uncle Mordecai who played the pivotal roles. They understood that our role on earth is not simply to pray for a miracle but rather to be a miracle. Facing the peril of the first recorded attempt of genocide, threatened by Haman, they responded with heroism. And heroes are miracles. They prove that we have the ability to imitate God and to accomplish true miracles.

Hanukkah, too, is a story of heroic human achievement. It was the Maccabees, a small family of profound spiritual idealism, who stood up to fight against an empire. It was the few against the many - but it was also the pure against the impure. Reason would not have given the Hasmoneans the slightest chance for victory. Only faith, faith in their potential as servants of God to achieve the impossible, that made it possible for them to become Divine agents of a highly unlikely miracle.

It is very instructive that the Hebrew word for miracle, nes, is at the root of the word nisayon, which means test. It is the same word that appears in the Torah when we are told that God tested Abraham. Miracles are nothing less than tests of our Divine potential. It is when human beings pass Divine challenges with honor and distinction that we are witness to what is worthy of being proclaimed a true miracle.

Ask me if I believe in these miracles today and I unhesitatingly offer many illustrations.

The people of Israel, modern-day Maccabees, who endured the mortars of Hamas this past summer and the ongoing terrorism of these last months while maintaining their faith and commitment to the holy land - they are a miracle.

The young men and women who serve in the Israeli army - native Israelis as well as volunteers from around the globe who are ready to risk their lives to protect their land and their people – they are a miracle.

The scholars and students of Torah who came the very next day to study in the synagogue in which holy rabbis were brutally hacked to death by terrorists - they are a miracle.

The Jews who in the face of resurgent anti-Semitism unparalleled since the Holocaust stand up against a world filled with media distortions, United Nations hypocrisy and blatant hatred of Jews in countries priding themselves on their liberal and democratic principles – they are a miracle.

On this Hanukkah we express our gratitude for these miracles that were initiated by man. They elicit our admiration because they remind us of the greatest miracle of all, the miracle, as King David put it , that “You have made man a little lower than the angels, and have crowned him with glory and honor” (Psalms: 8:5).