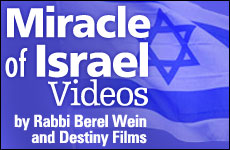 A series that captures the two most monumental events in recent Jewish history – the Holocaust and the birth of the State of Israel.

Destiny, founded by Rabbi Berel Wein, is a 501(c)(3) educational media foundation dedicated to bringing Jewish history to life in an exciting and interactive way. Films and multi-media programming are designed to educate and inspire, demonstrating how every Jew fits into the big picture of Jewish history.

Your Value as a Human

Habit of Repeating the Word "Encouragement"