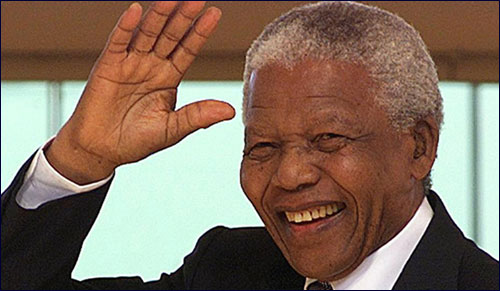 Nelson Mandela’s amazing attitude of reconciliation after his release in 1990 from 27 years in prison reassured very nervous South African Jews – and whites generally – that after living with “packed suitcases under the bed” during apartheid, they had a future here after all.

Most people had always realized that apartheid simply couldn’t go on forever, no matter how brutal the apartheid regime was, and that the whole thing might end in a racial bloodbath. Under Mandela, who died Thursday, Dec. 5, in Johannesburg at 95 after a long illness, there would be no bloodbath. He invited all South Africans to help build a “rainbow nation.”

During the seven decades after the young Mandela, came in 1941 to Johannesburg from the Eastern Cape seeking work, his numerous interactions with Jews ranged between supportive and downright hostile. One of his early encounters was when Jewish attorney Lazar Sidelsky gave him his first job in his law firm. Later, many of the white comrades who fought apartheid with him were Jews with whom he formed close bonds. Of the 17 activists arrested at Liliesleaf, Rivonia, in July 1963, five were whites and all of them were Jews.

Yet, as with other white groups, only a tiny percentage of South African Jews fought apartheid, and Mandela had little contact with them during the years of struggle. The Jewish mainstream was largely apathetic and went along with it, while not actively supporting it – Jews almost always voted for the liberal opposition parties in elections. Mandela’s name, however, was scarcely mentioned in Jewish circles during his imprisonment – the image painted by the regime of him as a brutal “terrorist” best kept locked away always hovered over the conversations.

There is also discomfort among South African Jews at the fact that Percy Yutar, a respected member of an Orthodox shul in Johannesburg, was a government prosecutor in the Rivonia Trial in 1964 at which Mandela was sentenced to life imprisonment. True to his generous spirit, however, Mandela invited Yutar to lunch just months after being inaugurated as the South African president, and made a point of publicly shaking his hand, thus sending a message that the bitter past must not be allowed to prevent a better future.

During the anti-apartheid struggle, his interaction with Jews was primarily with individual lawyers, journalists and activists. Then, after President F.W. de Klerk announced on Feb. 2, 1990 that the ban on the African National Congress was being lifted and Mandela would be released from prison, a new period began and Mandela engaged vigorously with mainstream Jewish organizations and leading Jewish philanthropists and businessmen.

Among those organizations was the South African Jewish Board of Deputies (Jewry’s umbrella representative body) at whose National Conference in 1993 he was the keynote speaker; yet hanging in the background was always the discomforting recollection that during apartheid the SAJBD had adhered to a formal “non-political” policy, saying its job was to look after Jewish interests, not be involved in South African politics. Such a posture amid apartheid’s brutality, with Jews living lives of huge privilege because of the system, had weighty moral implications.

Apartheid posed difficult questions for South African Jewry: What was Judaism’s duty to the oppressed among whom they lived? What had Jews learned from their own history of persecution? And did they have the courage to stand up against apartheid when, in this virtual police state, it would invite retribution from the regime?

Today, the Jewish mainstream points with pride to the Jewish activists who fought bravely with Mandela, many of whom were banned, jailed or forced into exile. This has provoked the retort that Jews who did nothing are basking in their reflected glory.

Right at the outset in the 1940s, Sidelsky, Mandela’s employer, insisted he complete his law studies at the University of the Witwatersrand, where Jewish students became his friends. Some later defended him in the two high-profile trials in which he was an accused – the 1956 Treason Trial and the 1964 Rivonia Trial.

The defense team in the Treason Trial in which 156 people, including Mandela, stood accused, was headed by advocate Isie Maisels, a respected member of the Johannesburg Bar. Another Jewish advocate, Sydney Kentridge, dealt particularly with Mandela as his counsel. Kentridge later recalled: “I could somehow tell from the many talks I had with him that this man was a leader. Of course I couldn’t have guessed he would become the leader he, in fact, became.” By the time the trial ended in 1961, all defendants had been found not guilty.

Central to Mandela’s contacts with Jews in the new South Africa was Glasgow-born Chief Rabbi Harris, who came to the country in 1988 when the apartheid grip on the society was already loosening. The two became close friends – Mandela referred to Harris as “my rabbi.” Their friendship threw into relief the question: Why had so few rabbis – the conveyors of Jewish values – played a role in resisting apartheid?

“We are sorry you are having trouble with your eyes, but we want you to know that there is nothing wrong with your vision.”

Mandela had eye problems from working in lime quarries during his imprisonment, which his Jewish doctor, Percy Amoils, corrected. Rabbi Harris commented at the time: “We are sorry you are having trouble with your eyes, but we want you to know that there is nothing wrong with your vision.”

When Rabbi Harris appeared at the Faith Communities hearings of the Truth and Reconciliation Commission in 1997 on behalf of the SAJBD, he apologized for the Jewish community’s “inactivity and silence” during apartheid. Other white groups had done no better, but Rabbi Harris’ words caused some soul-searching among South African Jews.

In 1985 a movement called “Jews for Social Justice” was started for social action against apartheid, supported by Rabbis Norman Bernhard and Ady Assabi. Again, as the reconciler, a few months after his release from prison, Mandela attended a Shabbat service at Temple Shalom in Johannesburg at Rabbi Assabi’s invitation. Just prior to that, Mandela had appeared on television warmly embracing PLO Chairman Yasir Arafat at Namibia’s Independence Day celebrations, provoking some enraged members of Assabi’s congregation to hurl insults at him for inviting Mandela.

Another of Mandela’s enduring friendships was with feisty Helen Suzman, the acclaimed Jewish politician who fought the apartheid system endlessly within the Chambers of Parliament. In the days when she was the sole member of the Liberal-Progressive Party in Parliament, she was the first member of Parliament to visit the prisoner Mandela on Robben Island and take an interest in the plight of the political convicts. He called her the voice of the true opposition. After apartheid he remained loyal to their friendship even after she had been almost totally marginalized by the country’s new political leadership. Suzman commented: “I have been airbrushed out of history by the new regime – but Mandela still visits me.”

With South African Jews so passionately Zionist, the question of the Israeli-Palestinian conflict would inevitably come up between them and Mandela. He accepted Israel’s right to exist within the 1967 borders and also promoted a Palestinian state. Instinctively, though, he remained closer to Palestinians than Israelis, particularly given the close links during apartheid between the ANC and the PLO. He saw the Palestinians as similar to South African blacks in their plight.

His proposals were regarded as “simplistic” by both Israelis and Palestinians.

However, he again showed his greatness when in 1995 he attended a ceremony at the Oxford Synagogue in Johannesburg in honor of murdered Israeli Prime Minister Yitzchak Rabin. In October 1999, he visited Israel, accompanied by Jewish community leaders. The trip was intended to repair the political damage caused by Israeli links with apartheid South Africa. Israel, although not involved in apartheid violence, had cooperated in military matters with the government.

Mandela proposed a plan for Middle East peace, saying the Arabs must recognize the State of Israel within the 1967 borders and Israel must give up territory for peace. His proposals were regarded as “simplistic” by both Israelis and Palestinians. In Gaza, he met with Arafat and, while in Israel, he visited Rabin’s grave and went to Yad Vashem.

Now Mandela is gone. What is his legacy for the country, the world – and for Jews? Certainly in South Africa there is no one in the current leadership who even remotely approaches Mandela’s visionary stature. And in the Middle East? If only a Mandela could emerge from either the Israeli or the Palestinian side to do there what Nelson Rolihlahla Mandela did for South Africa.

Geoff Sifrin is editor of the South African Jewish Report.

Climb for Life: Spartan Race for Teens with Physical Challenges

Flowers and Judaism: 8 Facts
Saadiah Gaon, Rashi and Maimonides: How Three Rabbis Revolutionized Judaism
King Sennacherib and the Siege of Lachish
Three Small and Easy Changes to Add Positivity in Your Home
Comments