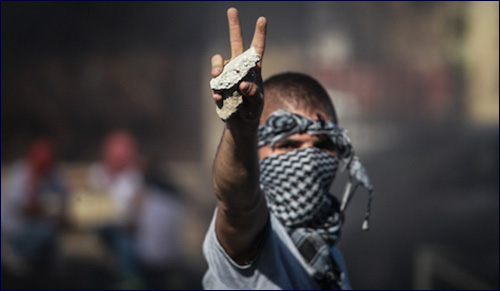 The Har Nof massacre has stripped away the veneer of security, leaving us feeling vulnerable.

Jerusalem has gotten a bit scarier the last couple of months. Israeli authorities are not  officially calling it the third intifada, but living in our nation’s capital is not as tranquil as it used it to be. After a spate of terror attacks by lone drivers (right around the corner from where I live), the horrific massacre in Har Nof’s largest shul, and two men being stabbed by Arab assailants near Jaffa Gate, (five minutes after I walked by that very spot), fear has gripped the city. It’s just been reported that the Shin Bet foiled a Hamas plot to attack Teddy Stadium. There is a shortage of pepper spray (which my wife and kids now carry) and a greater mistrust toward Arabs living and working in the city due to fears that they may be the next terrorist who goes on a rampage.

Terror hits everyone. We are being attacked by an enemy that wants to annihilate the Jewish people and drive us from our homes. And while many Arabs certainly do want peace, it is becoming harder to differentiate which Arab seeks no harm and which Arab is prepared to grab an axe or car to kill innocent civilians. This is not in any way meant as a racist statement. It is the very real concern every Jew living in Jerusalem faces daily. Just take one ride on the Jerusalem light rail to experience what I’m talking about.

This week’s Torah portion gives us some insights in how we as Jews need to prepare to encounter someone who wants to harm us.

Jacob gets word that Esau, his twin brother and foe who he has not seen in over 20 years, is coming to greet him with an army of 400 soldiers. Jacob is afraid, and implements three different strategies in preparation to meet his mortal enemy.

First, hoping to bribe Esau, he sends messengers telling him about an enormous gift of livestock and servants. Then he prepares to do battle with Esau in case his gifts do not appease him. And finally Jacob prays to God to save him.

The order of Jacob’s three-pronged defense strategy is not random. Why did he leave prayer for last? The Jew’s primary weapon is prayer. Shouldn’t praying to God to save him be the first and most significant act of preparation?

The Torah is teaching us several important lessons through the steps that Jacob took and their specific order.

Jacob first sends gifts to Esau because if a confrontation can be avoided through bribery, that is the best possible outcome at the least cost. If some gifts can buy peace and avoid bloodshed, that is the preferred route.

Gifts that are not backed up by a clear readiness for confrontation become a statement of capitulation that breeds contempt, not peace.

But a gift alone is a very dangerous strategy. A bribe is effective only if the enemy knows that beneath the velvet cover lays an iron fist. Esau needs to know that if conciliation fails, Jacob is fully committed to waging war and doing whatever it takes to protect his family.

Gifts that are not backed up by a clear readiness for confrontation become a statement of capitulation that breeds contempt, not peace. The enemy smells weakness, and his appetite is only whetted.

This is one of the reasons why the Oslo accords were such a dismal failure. Our Arab enemies realized that the nation of Israel was tired of war. The Israeli government was offering concessions without the readiness to go to war, if need be. As a result, land for peace brought only conflict and escalation. The Arab leaders viewed our concessions as capitulation and as a result they were emboldened to harden their stance and attack Israel.

Jacob’s decision to make prayer his third and final act of preparation teaches us a crucial lesson about the interplay between prayer, relying on God and taking responsibility.

Prayer is appropriate only once we have undertaken as much responsibility as we possibly can.

Trusting God and putting in our necessary effort is a delicate balance. We have to do both. Prayer is appropriate only once we have undertaken as much responsibility as we possibly can. In the absence of assuming responsibility, we can cloak ourselves in self-righteousness and use prayer as an escape from our obligations. This is antithetical to what God wants from us.

Imagine stumbling across a butterfly as it struggles to break out of its cocoon. You look in wonder at the metamorphosis that is occurring right before your eyes, and out of compassion, you break open the cocoon to help the poor butterfly break free. You think you are doing a kindness for the emerging butterfly, but in fact you are harming it irrevocably. The butterfly needs to exert its muscles by breaking out of its cocoon because through this effort it gains the strength to flap its wings and fly.

The Almighty wants us to exert our muscles, to put in the necessary effort and learn what it means to be responsible. Turning to prayer as a quick fix that sidesteps responsibility runs counter to God’s overall purpose in this world because it robs us of the opportunity to emulate Him by utilizing our free will.

At the same time prayer reminds us that ultimately, everything comes from the Almighty. We must realize that God is in control and trust that He has our back. But prayer is not appropriate until we have demonstrated to God that we are acting responsibly and doing all that is in our power. That is why Jacob prays only after he has completed the other two steps of preparation, and why we need to ensure that we are doing our utmost in being responsible before relying on prayer to save us.

The Har Nof massacre has stripped away the veneer of security, leaving us feeling vulnerable. We must be strong and firm. We must take responsible action, as a nation and as individuals. If you do not live in Jerusalem, that includes coming to visit to demonstrate your solidarity and that you will not give into to terror. (Just last week 400 women from around the came to Israel on a JWRP mission. No one cancelled their trip.) And lastly, we must put our trust in the Almighty and turn our hearts to God in sincere prayer, recognizing that ultimately He is the only One who can save us.

Based on a class by Rabbi Noah Weinberg, zt’l, and with the assistance of my brother, Rabbi Eric Coopersmith.

A Walk in the Heart of Jewish Paris
Korach 5782: Visit to Lift the Spirit
That Time The Ivy League Found A Way To Limit Jewish Enrollment
Would You Rather Be Right or Happy?
Comments
MOST POPULAR IN Israel
Our privacy policy