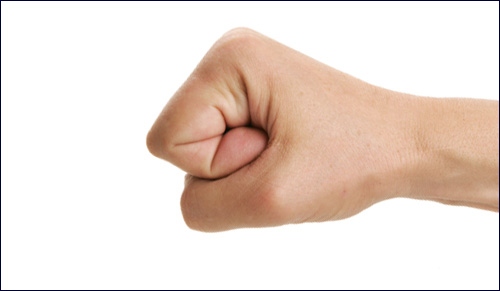 A number of Jews have been victims of this frightening new trend.

A terrifying new trend has developed in the United States that some authorities think show signs of rising anti-Semitism It's called “The Knockout Game,” a contest in which players, mostly teenagers walking in a group, are challenged to choose someone passing by and knock them unconscious with one punch, referred to as “The One-Hitter Quitter.”

The point of this game? “For the fun of it,” said one teen on video footage of an attack which was broadcast on CBS. “They just want to see if you got enough strength to knock somebody out,” said another.

The selection process in these attacks, however, is not completely random; of the innocent victims across at least 14 states a good number have been Jewish.

Yehuda Mangel, a Crown Heights resident, was recently a target of the “Knockout Game”. Emerging from a convenience store at 10:30 in the evening, he was attacked by a young black man. “I’d noticed him through the window,” Yehuda says in an Aish.com interview, “so my guard was up already. As I walked out the doors, he took a swing at me. I moved out of the way at the last second, and he missed.” Mangel screamed at the young man and threatened to retaliate, but his attacker took off before things escalated.

“To be honest,” Yehuda confides, “I didn’t even think to be scared in the moment. I was pacing around from adrenaline for a few hours afterward, and my voice was hoarse from yelling at the guy. But after things calmed down, I realized I was shaking everywhere. It was really, really scary. If I hadn’t seen him, he could have killed me.”

Some believe that anti-Semitism is at the root of these attacks.

Mangel happens to be one of the lucky ones to emerge unharmed from these attacks. Seven deaths have already been reported as the result of this “game,” and a number of others have been seriously injured (including a 78-year-old woman and a WWII veteran). “The worst part about it,” Mangel says, “is that while it’s happening, someone else videos it and they put it up on Youtube, like it’s something to be proud of.”

The New York police have become increasingly involved, and some believe that anti-Semitism is at the root of these attacks. The New York Post wrote, “The New York authorities describe a recent series of such attacks and, because Jews have been singled out...are considering prosecuting these assaults as hate crimes.” In fact, according to The Business Insider, some groups are referring to their versions of “The Knockout Game” as “Beat the Jew.” Upon release of this report, the Anti-Defamation League gave a single-word response on their Facebook page: “Really?!”.

In cities like St. Louis, Missouri, Hoboken, New Jersey, and especially in Crown Heights, increasing incidents of anti-Semitism have been cause for alarm. Chanina Sperlin, executive vice president of the Crown Heights Jewish Community Council, spoke out at a recent gathering, as reported by The Jewish Week, about “a lot of [anti-Jewish] racism over the last several months. A woman was walking down Brooklyn Avenue was told, ‘If you don’t cross the street I’m going to stab you.’” On November 18th, according to Sperling, a yeshiva student was walking to school when someone threw a bag at him, with hot coffee inside. He says these incidents are happening “on a daily basis.”

The press, meanwhile, has devoted much time and ink to the discussion of why these attacks are happening: Could it be poor parenting? Overexposure to violent movies and video games? Typical teenage machismo? Or, is it just plain boredom? There is no simple answer, though probably all of these elements are involved somewhat. But the pattern also shows that racism, and specifically, anti-Semitism, are driving factors.

Not everyone is prepared to make connections to anti-Semitism or racism. Despite eight attacks on Orthodox Jews, New York Police Commissioner Ray Kelly neglected to see a pattern. He’s not even sure the phenomenon even exists; he thinks it may be an urban legend. As for the press, it was only recently that they even started reporting that most of the assailants were African-American.

Anti-Semitism isn’t only in the Middle East. It is rearing its head everywhere from Paris to Pittsburgh. Jewish hatred is becoming more acceptable to voice out loud and it is our responsibility as Jews to acknowledge it, even if the mass media doesn’t.

In the season of Hanukkah, we’re reminded of our ancestors who were unafraid to stand up against injustice, despite being few in the face of many. 2000 years later, we have the opportunity to follow their example. By speaking out for and living as Jews, we have the power to ensure we emerge from this “game” victorious.

Do you think anti-Semitism is on the rise in the United States? Let us know what you think in the comment section below.

A recent victim from Borough Park speak to Dee Voch in this video:

Rosh Hashanah: It's Not about Who's Been Naughty or Nice
It Takes A Lot Of Faith To Be An Atheist
How Instagram Brought Back This Nostalgic Soup
What Makes Eli Run?
Comments
MOST POPULAR IN Israel
Our privacy policy