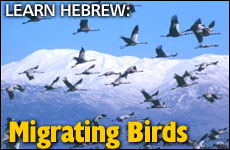 Israel is the world capital for migrating birds.

In Israel, when you look up at the autumn sky, you notice something moving up there. Not a cloud, not a plane. But birds. They are migrating (נְדִידָה – nedida) from the northern hemisphere to the south, from cold winter climates to warmer and more welcoming areas. 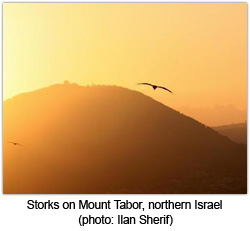 Israel is the world capital for migrating birds. Since birds have to migrate thousands of miles, they conserve energy by taking advantage of “thermals” – wind currents rising from the heated earth during the days. And since Israel is a “land corridor” that links the continents of Asia, Europe and Africa, its land space funnels migrating birds on a massive scale.

Half a billion birds cross Israel's narrow airspace twice every year in the course of their migrations. Consequently, Israel has become a paradise for bird lovers (חובב ציפורים - chovev tzipurim). In Israel, more species and greater numbers appear in one small area than in anywhere else in the world.

Some birds, such as the wagtail (נַחְלִיאֵלִי, nachli’eli) and seagull (שַׁחַף – shachaf) find Israel to be a wonderful place to stay during winter. Other birds, such as the stork (חֲסִידָה, chasida) and the pelican (שַׂקְנַאי, saknai) continue to fly to the warmer south where they stay until the next change of seasons. 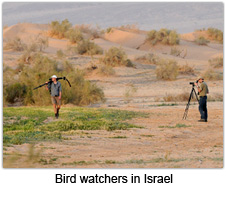 Migrating birds encounter various dangers when flying over settled areas of the globe. For example, there is the threat of electrocution (חישמול – chishmul) by power lines.

Coexistence of “steel birds” (airplane – matos - מטוס) and “real birds” has caused problems for both sides, in the form of accidents that have damaged airplanes and taken the lives of many birds.

The Israeli Air Force has a very high “birdstrike” rate. This is because Israel has a higher density of military training flights than anywhere else – even more so since Israel returned its major military airfield in the Sinai to Egypt. As such, the chances for collisions are relatively high. In fact, over the past 30 years, more Israeli aircraft have been downed by birds than by enemies.

One eagle that flew into the air intake of an Israeli F-16 forced the pilot to bail out, causing the plane to crash. In another case, a honey buzzard destroyed a $5 million Skyhawk jet. As reported in the Jerusalem Post, the IDF pilot survived only because the bird made a hole in the windshield and “by chance” hit the ejector handle, expelling the pilot and activating his parachute. Bird collisions have caused the deaths of three Israeli pilots. 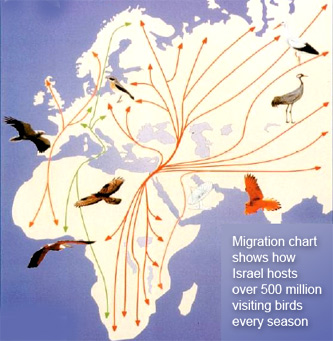 Israeli scientists have found several solutions to reduce the number of accidents involving aircraft and birds. The International Center for Study of Birds Migration ( המרכז הבינלאומי לחקר נדידת הציפורים בלטרון), located between Tel Aviv and Jerusalem, develops computer tracking of migrating birds. The center has special 3-D computer displays that show the location of flocks, which the Israeli Air Force uses to coordinate its training flights. Further, battery-operated satellite transmitters are attached to migrating birds, to track the birds’ whereabouts during their flights.

To increase Israeli pilots' awareness of the problem, all squadrons have posters with the slogan "Take Care – We Share the Air!" (היה זהיר – גם אנחנו באויר)

Birds don’t recognize borders, nor attempt to understand human politics. They simply respond to nature – recognize the shortening days, follow the sun or the stars, and try to make the best out of the wind. As such, they are ideal symbols of the peace for which we all yearn.

The stork in the heaven knows her appointed times;
and the turtle-dove and the swallow and the crane
observe the time of their coming (Jeremiah 8:7) 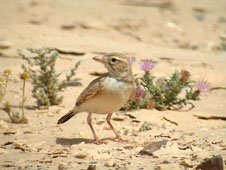 שַׁחַף – Shachaf – used as a modern name for both boys and girls. Means “seagull,” which spends the winters in Israel. 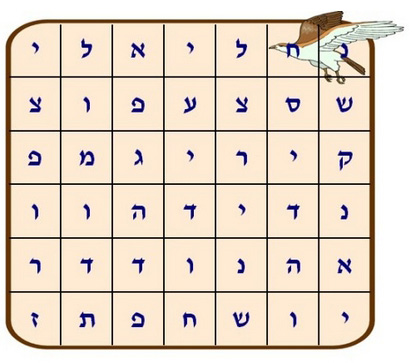 Learn Hebrew: Holocaust Memorial Day
The Power Of Prayer
Va’etchanan 5782: A for Effort
Can You Show Me This "God?"
Comments
MOST POPULAR IN Hebrew
Our privacy policy
Aish.com Is Looking for Great Writers