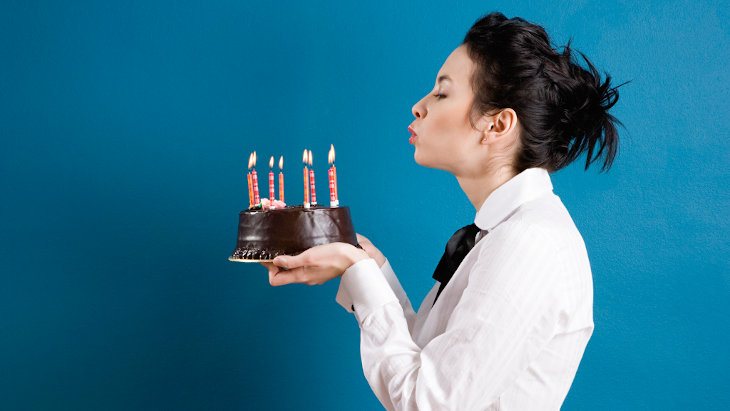 Tips for making your Jewish birthdays a time of meaning and growth.

In addition to the date of birth according to the “regular”, secular calendar, we each have a birthday that corresponds to the Hebrew calendar. (Click here to find out when your Hebrew birthday is.) These dates coincide only every 19 years.

On Hebrew birthdays, everything we do has a heightened importance. The Talmud describes that when the evil nation Amalek attacked the ancient Israelites, the Jewish people placed fighters whose birthday was that day in the front of the defensive lines; the implication is that their birthdays were a lucky day for the soldiers, and might help sway their efforts to favorable outcomes. (Jerusalem Talmud, Rosh Hashanah 3.8)

Hebrew birthdays are a powerful time day for growth, action and self-reflection. They mark the anniversary of the greatest miracle in our lives: the moment when God placed us on earth, armed with our very own individual missions in life. Birthdays are a chance to take stock, reflect, and adjust the direction we’re heading in as we embark upon another year.

Below are ten traditional ways to mark your Jewish birthday and help you embrace the power and meaning of the day.

Like secular birthday celebrations, traditional Jewish birthdays are a time for nice food and new items – but the focus is different, with the emphasis on our Hebrew birthdays being on giving thanks to God for what we have.

The very first birthday party mentioned in the Torah was the lavish feast Pharaoh held for himself while presiding over the Jewish slaves in Egypt (Genesis 40:20). Pharaoh’s selfish party – in which there was no recognition of the role the Divine plays in our lives – is an example of how not to celebrate a birthday today.

Eat or Wear Something New

Many Jews have the custom of eating a fresh “new” fruit (defined as something we haven’t eaten in at least a year) or wearing a new garment – giving us the opportunity to recite the traditional Hebrew blessing over new experiences, the Shehechiyanu.

Blessed are You, Adonai our God, King of the universe, Who has kept us alive, sustained us, and brought us to this season.

Take Stock of the Past Year

Our birthday is a great chance to pause and look over the past year, identifying ways we’d like to grow and change. Try carving out some quiet time on your Hebrew birthday to look back over the past 12 months and think about what you’re proud of and what areas might need improvement. This is also a good time to engage in some quiet, personal prayer.

Each year on Yom Kippur we recite the timeless three-fold Jewish formula for change: tzedakah (charity), tefillah (prayer) and teshuva (repentance) are the way to break with the past year’s habits and forge a newer, better way in the coming year.

Hebrew birthdays are another chance to use this formula for change. After taking stock of the past year and resolving ways to live differently in the year to come, consider pledging money to charity. This is your day to be a bigger, more spiritual person. Express that by sharing what you have with others.

Read a Jewish Book or Article

Jewish birthdays are a traditional time for studying Jewish texts. The great sage Rabbi Avraham Shmuel Sofer (1815-1871) led the renowned Pressburg Yeshiva in Hungary. (He was known in German as Rabbi Samuel Schreiber; in Yiddish he was often known by the title of his most famous book, Ketav Sofer, or “Writings of the Scribe”.) When he turned 50, he celebrated his Jewish birthday by concluding a rigorous course of Jewish study – and teaching what he’d learned in a major public lecture.

“Behold,” he wrote, “I have blessedly taken my birthday... and I have thanked God publicly for having enabled us to live, and sustained us to this time… And on that day, the day God fashioned for me, I made a siyum (celebration marking the completion of a volume of the Talmud)....may He be with me as He was with our holy fathers to increase Torah and glorify it..”

While we can’t all be the exalted scholars that Rabbi Sofer, we can learn from his example and mark our Jewish birthdays by studying Jewish texts and – if we can – teaching what we’ve learned to others as well.

In addition to studying Jewish texts in honor of his birthday, Rabbi Avraham Shmuel Sofer spent his Jewish birthday thinking about his behavior over the past year. His son-in-law wrote that once he came upon Rabbi Sofer crying, and asked what was the matter. Rabbi Sofer explained it was his 54th birthday, and he’d realized that he was capable of performing even more good deeds that he’d been used to.

His is an inspiring example: no matter our age, there is always more we can do. Rabbi Sofer was a towering giant in Torah scholarship and Jewish observance, yet he used his Jewish birthdays as opportunities for enormous growth. We can follow his example, adding new mitzvahs and making new resolutions on our own birthdays as well. This year on your Jewish birthday, consider taking on a new commitment: whether it’s lighting Shabbat candles, signing up for a Jewish class, donating between 10% and 20% of your income to charity, or any other Jewish rite. Doing so will ensure that the coming year is even fuller of blessings and spiritual growth than the year before.

Your Own Special Psalm

Some Jews have the custom of reciting a special Psalm on their Jewish birthday. The Biblical Book of Psalms is made up of 150 incredibly beautiful short prayers; their poetry helps give voice to our deepest thoughts and prayers. On your Jewish birthday, consider reciting the Psalm that corresponds to the new year in your life that’s just begun: add one to your current age, and say that Psalm on your Jewish birthday.

It’s also customary among some Jews to say that special Psalm every day for the coming year, tapping into the spiritual power of their Jewish birthday all year long.

Give Blessings to Others

You can give people blessings for health, success, help in finding a spouse, or any other need. Spending some time on your special day thinking of others and praying on their behalf is a powerful way to use your birthday for good, and can elevate your day, drawing you closer to family and friends, and to the Divine.

Jews and the Jewish Birthrate

Why the Jews? Exploring the Unique Meaning of the World's Longest Hatred
What Does Kosher Mean Literally?
Live Abortion Panel
Morality and Abortion: Three Views
Comments
MOST POPULAR IN Jewish Society
Our privacy policy