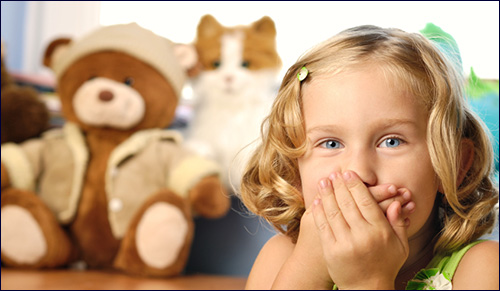 Let your kids make mistakes and grow from them.

In our home when someone makes a mistake – spills the juice, breaks a glass, or oversleeps – we often jokingly say, "It's a good thing we celebrate mistakes in our family..." It sounds silly but it usually works to break the tension of the minor (and sometimes major) oops that come along with family life.

Adults need to let children make mistakes and learn from them. We need to watch them struggle with and settle their own problems. We also need to let them do as much as they can for themselves and treat children responsibly so they can function on their own.

It is hard to let children make their own mistakes. We feel, “If they would just listen to us then they would not have to suffer from their mistakes.” Allowing them to do for themselves sometimes makes more work for us. “If I pour the juice it won’t spill.”

But learning to recognize our mistakes, repair them and grow from them is essential for kids. We want to protect our kids, but if they aren’t allowed to make mistakes they can become fearful of making the smallest decisions, hesitant to solve problems and afraid to try new experiences.

We want to promote resilience in our children. Resilient children make mistakes, get up, brush themselves off and move on.

Remind kids often: “No one is perfect” and “Everyone makes mistakes. It is part of how we learn.” This teaches children to keep a good attitude about their errors, and they’ll be less fearful of making mistakes.

Children should take note of their accomplishments so that can see how far they have come, without focusing on the mistakes they may have made on the way. “When you were a baby, you couldn’t walk. And look at you now! You run so fast, I can hardly keep up with you.”

Last summer, my son rode his bike to his job. He complained that his backpack kept on banging against the wheel of his bike. It was driving him crazy. He took an old backpack and tried to refashion the straps so that his bag wouldn’t hang down so low and reach the wheels of his bike. He was using scissors. It seemed to me that he was ruining this backpack but I kept my mouth shut. After a few unsuccessful attempts, he came to the same conclusion. “I think I made it worse.”

Instead of berating him for his attempt, I knew that this was the perfect opportunity to applaud his efforts in trying to find a solution to his problem. I said, “I am glad you tried. You know it took Thomas Edison over 1,000 attempts to make the light bulb. I’m also glad that you used an old back pack and not your new one.”

It is so hard to keep ourselves from butting in with criticism and advice. But we need to hang back and think of ways to respond that promotes resilience in our kids. We can teach children that little failures are opportunities for growth and that effort should be celebrated.

4. Tell stories of failures that were really successes.

Many successful people relate that their mistakes and failures were valuable lessons. Their difficult and oftentimes painful experiences shaped their future in powerful ways. This is a worthy attitude to adopt. Collect stories about failures that were the impetus for great achievements and share them with your clients and students.

One teacher I know enjoys telling children the story of the invention of the telephone. She has her class read the following story:

Bell enjoyed the work of the German physicist Hermann Von Helmholtz. In his book, written in German, Von Helmholtz stated that, vowel sounds could be produced using electrical tuning forks and resonators. Bell could not read German very well so he thought that Von Helmholtz had said that vowel sounds could be transmitted over wire. This misunderstanding changed the world. Alexander Graham Bell said, “It gave me confidence. If I had been able to read German, I might never have begun my experiments in electricity.”

5. Be honest about your own mistakes:

Parents can share their mistakes with children and what they learned from those errors. “Yesterday we were supposed to read two books and I only read one. Today I am going to make that up to you.” “I thought that you were coming out of bed just because, but you were trying to let me know that Sara was hurt. That was my mistake."

Teaching kids to celebrate mistakes goes a long way in promoting resilience in kids and helping them celebrate life to its fullest.

Discovering My Child is Autistic

Raise Your Kids without Raising Your Voice: Comment, Label, Reward

Shortcut Parenting
Why Are The Prayers Of Yom Kipur So Repetetive?
Ha'azinu 5783: A Time for Unity!
Twisted Thinking
Comments