King Tut & the Revolution of Torah 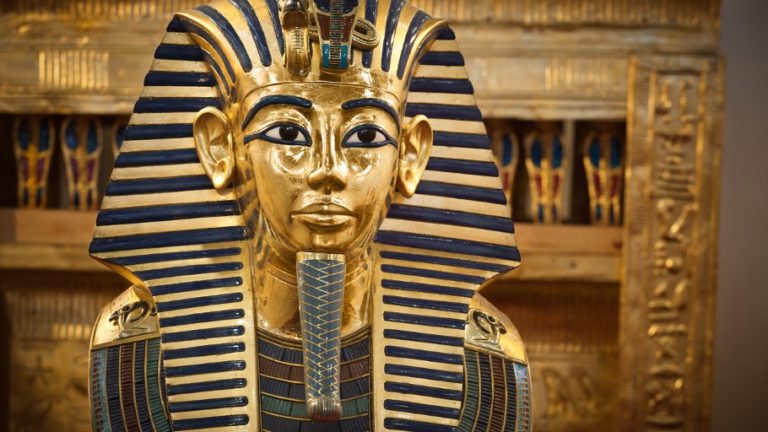 I didn’t expect to walk away from a King Tut exhibit with a new way to make Shavuot meaningful.

There is a King Tut exhibit on display at the California Science Center. The discovery of the tomb illuminated much about the Egyptian culture. Fun fact: the archaeologist who was credited with discovery packed and shipped 5,398 items from the tomb to a museum in Cairo. That’s a lot to be found in one burial site. And a lot to learn about the customs and beliefs of the Egyptians.

As we left, my husband and I turned to each other in awe, and said in unison, “That was the perfect exhibit to see right before Shavuot.”

How could that be? In delving into the lives of the ancient Egyptians, we discover, among other things, a big focus on magic, myriad forms of idol worship and a seeming obsession with death. This helps illuminate the life of the Jewish people before they were redeemed and taken out of the land. It helps us understand why Moses originally approached Pharaoh with some magic tricks. It helps us understand the Almighty’s strategy in demonstrating His overarching power. It helps us recognize what state the Jewish people must have been in at the time of Passover story. And so much more. I am only skimming the surface here.

But the real insight came when contrasting Egyptian culture and beliefs with the Torah. From looking at their lifestyle, we get a glimpse of what a complete revolution the giving of the Torah was. We get a taste of how it completely changed humanity, that it was a new and unique way to look at life and ourselves.

Belief in only one God challenged the Egyptian way of life that was completely immersed in idolatry, that credited idols with all the good in their lives, that blamed them for the bad and that spent significant time and resources trying to propitiate them.

Prohibitions against magic that fill the Torah taught the Jewish people that any real growth had to be generated internally, had to come from hard work and not from some special spell, potion or amulet. It also reminded us of the concept of Divine providence, the idea that the Almighty is running the world and that it is all in His hands.

Although the IMAX movie shown in advance of viewing the exhibit proclaimed that the Egyptians loved life, everything about the exhibit seemed to suggest the opposite. There was so much preparation and focus on what material goods went with people into the afterlife that the whole point of both this world and the world to come seem to have been missed. It highlighted our view that this world is a tremendous opportunity – to grow, to change, to connect to God – that we don’t want to waste. And that the afterlife is a completely spiritual existence, a world of souls, with no more ties to the material.

Appreciating the revolutionary nature of Torah, no wonder there was complete silence when the Torah was given on Mount Sinai. The world was being completely upended and everyone and everything could only listen awestruck.

I didn’t expect to walk away from a King Tut exhibit with a new way to make Shavuot meaningful this year, with a deeper appreciation of the revelation of Torah. But if you make yourself receptive, you never know when the opportunity may strike.

Losing Purim in All the Hamantashen