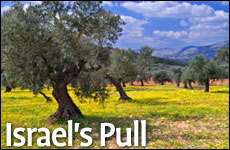 Why are families leaving it all behind to come live in Israel?

For me, Aliyah was easy. I was 22, not a worry in the world, and going out with a cute Israeli who would later become my husband. I had dreamed of coming to live in Israel since I was 15, and arriving was a dream come true.

Blessed with a positive, optimistic nature, I was only slightly exasperated with the bureaucratic hurdles, the long lines, and the difficulty of understanding the language. The scorching summer heat and humidity were difficult, and I missed the summer rain and thunderstorms of my native Johannesburg terribly, but hey, it was nice to see blue sky every day.

Living in the middle of nowhere without a car, it never bothered me that it could take about two hours to get to work by hitchhiking, or that there were only three busses a day. Standing at the bus stop I could see the mountains, smell the wild flowers, and tangibly feel the beauty of Israel. I was young and oh so happy. Enchanted with this country, filled with joy for being here in the land of my people, the land that God gave us.

Now, almost 20 years later, slightly greyer (only slightly) and with a few more wrinkles, I still feel that same passion and love for Israel. I still feel tremendous emotion when I see the Israeli flag, and although I have issues with the government, I am extremely grateful to live at a time when Jews are ruling in their own land.

Kind of like a good marriage: in the beginning it's all bliss and romantic idealism, then 20 years later the initial romanticism is over, in its stead is a solidified, firm love and friendship, still giving rise to moments of passion and delight.

People from all over the world have come to live in Israel, overcoming unfathomable hurdles:

The Russians -- after years of harassment behind the Iron Curtain, how incredible to welcome the Refuseniks (Jews from the former Soviet Union who were denied permission to emigrate to Israel) and their brethren. Seeing Anatoly Sharansky walking onto Israeli soil was one of the highlights of my life.

Ethiopian families that walked thousands of kilometers in enemy territory, every step in the burning sand one step closer to the holy land. The horrific conditions in the refugee camps in Sudan wiped out thousands, yet despite hunger and harassment they persevered in order to fulfill their dream.

My father-in-law came from a wealthy family in Tunisia and wore a suit and tie every day. When he first came to Israel he lived in a shack and picked oranges for a living. My mother-in-law laughingly remembers the barbaric conditions of the "ma'abara," refugee camps in the 1950s, providing tents or tin huts with no electricity or water as temporary accommodation. "How could you bring up children like that?" I ask her, mentally envisioning my stack of Pampers, my dishwasher, my flushing toilets. "We were just happy to leave Tunisia," she simply replies, "happy to leave the persecution and fear."

I think of my sister living in New Jersey. Their 4-story two-family home is gorgeous. Shoppers' paradise is a short drive away. Every worldly convenience is available, often on clearance. Why on earth would they leave? Yet Israel is pulling them closer, and families are uprooting their stylish existence to come and live in a country that materialistically can't compare.

What is it about Israel that is pulling them?

Living in America (or Johannesburg for that matter) is like living in a big vat of toffee. Toffee is yummy; it is soft and sweet and tastes great. It's oh so comfortable to lazily float in its thick gooey embrace, surrounded by delightful smells. When you are hungry, just open your mouth and partake in the most delicious of treats. But the extravagance of living in toffee can wear thin. After a while the sugary taste becomes sickly sweet. The thick texture cloys in the throat, and you find yourself stuck in the sticky morass. It is extremely hard to climb out of the smooth walls of the vat, so much easier to just sink back in and indulge.

That is why coming back to Israel after a visit to America is so refreshing. It's like a cathartic detoxification after a massive binge. Israel is unpretentious; what you see is what you get. Struggling for survival, Israel doesn't play games. And despite the constant threat of war, terrorism, demonization by the world press, water shortages and no lack of other problems, Israel is flourishing. Just look at what we've accomplished in merely 60 years: Israel is one of the world leaders in hi-tech, our army is top notch, and our democracy, economy, technology and medical expertise easily match Europe and America.

Israel is the land of opportunity – and I'm not talking about business opportunity, although this does abound in Israel too. I'm talking about spiritual opportunity. Israel is a land where every Jew is connected to each other. Despite tremendous cultural, religious and social differences, there is an underlying thread that connects us all. The recent war in Israel's south is a perfect example. While our soldiers fought, entire communities mobilized to bring food and supplies to army bases down south. Toys, treats and basic essentials were collected for families sitting in bomb shelters. Prayers and special learning sessions were held by yeshivas and seminaries. Children from war-torn southern communities were brought en-masse to the center of the country where they were treated like royalty. There was a tremendous sense of cohesion and solidarity in the country.

With all this opportunity for spiritual growth, it isn't that surprising that Jews from all over the world are coming to Israel. Instead of sinking into a sticky quagmire of toffee, Jews are choosing a better life for themselves.

When the Aliyah planes come I'm literally bawling, tissues clutched in my hand, while my husband looks at me incredulously. I cry because despite my ramblings I am aware that leaving it all behind still requires a sacrifice, and I'm overwhelmed at the courage of people who do so.

It's not easy to live in Israel, but this is truly the only place Jews should be. I'm so thankful that we have a country to come to; that I'm alive to witness the biblically-promised "ingathering of the exiles" to this sun-soaked, spiritually shining, magnificently beautiful God-blessed land.

And when you come, no doubt I will be there, crying out of joy, and welcoming you home.

Mandy Gaziel has a degree in English Literature and Judaica. She has worked in the biotech and pharmaceutical quality management world for over 20 years, and enjoys writing in her spare time. Mandy lives with her family opposite some rolling hills in Ramat Bet Shemesh, Israel.