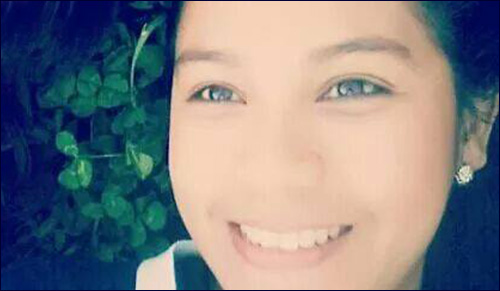 An Arab terrorist killed Karen Yemima Mosquera, a convert from Ecuador, but he could not kill all her dreams.

Born to a Christian family in Ecuador, Karen Mosquera was 17 years old when her genealogical research revealed that on her mother’s side she was descended from conversos [Spanish Jews who converted to Christianity in the 15th century during the Inquisition]. 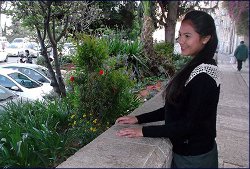 “She never accepted the teachings of the Church,” Yael Barros from Brazil, Karen’s best friend in the Jewish studies program in Jerusalem’s Old City, declares. She is sitting on her dorm bed, next to the bed that was Karen’s before she was murdered in a terrorist attack at a Jerusalem light rail station. An Arab terrorist rammed his car into a crowd of pedestrians, killing a three-month-old baby and critically wounding 22-year-old Karen.

“Anyone else would have died on impact,” testifies Karen’s cousin Sabrina, who saw her horrific injuries in the hospital ICU. “But Karen Yemima was so determined. She fought the angel of death for four days.” On Sunday, October 26, Karen succumbed to her wounds. She was buried on the Mount of Olives that night.

She fought the angel of death for four days.

“Karen Yemima didn’t feel in her heart that the teachings of the Church were the real truth,” her friend Yael explains. “She told me that when she started studying Torah and mitzvot, everything made sense to her. And she was very, very happy studying Torah, like she had never been in her life.”

Becoming Jewish in Ecuador is an arduous process. There are no conversion courts and Jewish studies in her native city of Goayaquil were limited. But Karen always dreamed of going to Israel.

Very intelligent, at the age of 18, she was awarded a full scholarship to Goayaquil University. While she studied psychology during the day, she stayed up most of the night studying Judaism on the Internet. Through a Jewish friend, she met Israeli Spanish-speaking Rabbi Gavriel Geiber online. Impressed by Karen’s ardent interest in Judaism, Rabbi Geiber taught her through the computer. Karen started keeping mitzvot, praying the Jewish prayer services, making blessings on food, and dressing modestly. 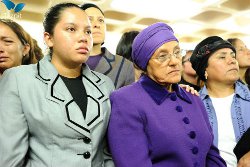 Karen’s mother at the funeral.

Her mother and younger sister followed suit. Like many descendants of conversos, Karen’s mother Rosa Cecilia observed customs that only later she discovered were Jewish. For example, when someone in the family died, Rosa Cecilia covered the mirrors. And following an arcane Sephardic custom, whenever she cut nails or hair, she burned the cut-off nails and hair rather than throw them away.

A year and a half ago, Rosa Cecilia twice dreamed that her daughter Karen was travelling to Israel. She saw an airplane with the word “Israel” emblazoned on its side, and Karen was pulling a wheeled suitcase onto the plane. With great excitement, she told Karen about the dream, and added, “I want to buy you clothes that are appropriately modest for wearing in Israel.”

That was the impetus Karen was waiting for. Then in her third year of university, she responded, “Mom, I’m going to the university right now to cancel my enrollment and go to Israel.” Soon after, she arrived in Jerusalem, where Rabbi Geiber had arranged for her to live and study at Machon Roni in the Old City. As her best friend Yael remembers with admiration, “She was so brave. She left everything – her family, her studies – and came here alone.”

The Heavens Are Open

For a year, Karen studied Judaism. She also worked cleaning houses, saving up money to bring her family to Israel, which was another of her dreams. Indeed, her family would come to Israel, a trip paid for not by Karen’s meager savings, but by the Israeli Ministry of Foreign Affairs, which brings the family of foreign terror victims to attend their funerals.

Five months ago, Karen underwent conversion, taking the Hebrew name Yemima. As Yael explains, “When a person converts in the mikveh, the heavens are open. Karen Yemima came back to the dorm that day exalting, ‘Now you can ask me for anything! The heavens are open.’ She was so ecstatically happy.”

On her Facebook page that proud day she posted: “Thank You, Hashem, for the day I came to Israel! I got to see one of my dreams come true. And I hope to stay here for a long time. I hope to get to see my family share together with me this new life. Thank You, Hashem, that you never left me alone, and You keep giving me strength every day.”

“Karen Yemima was an example to all the other girls,” testifies Yael. She recalls one day when a group of the students was walking together in downtown Jerusalem. They had all bought juices, and as they were running to the bus, the other girls muttered their blessing over the juice before they drank. Only Karen Yamima stopped in the middle of the sidewalk, closed her eyes, and uttered the blessing with appropriate devotion.

When Karen Yemima and Yael had a free afternoon, they often would take a walk outside the Old City walls to Mount Zion. Sitting there, they would gaze at the view – the ancient Jewish cemetery on the Mount of Olives, where so many righteous Jews are buried. One day, Karen Yemima exclaimed, “Yael, I want to live here, to marry here, to have my children here. And I want to die here. And I know it’s impossible, but we can dream, can’t we? My dream is to be buried on the Mount of Olives, because when Moshiach [the Messiah] comes, I will be the first to rise up and be in the Holy Temple. Can you imagine that?”

On Wednesday, October 22, Karen Yemima finished work at the house that she cleans and was on the way to a Torah class. She alighted from the train at the Ammunition Hill station. Suddenly Abdel-Rahman Shaloudi, 21, who had been released from an Israeli prison where he had served time on terrorist charges, plowed his car into the crowd of disembarked passengers. He ran over Karen Yemima, inflicting mortal injuries, killed a 3-month-old baby, and injured several others.

The terrorist destroyed Karen Yemima’s dream to marry and have children, but sadly her dream to die in Israel and be buried on the Mount of Olives came true this week.

A Blizzard in Shilo
What Does Kosher Mean Literally?
Live Abortion Panel
Morality and Abortion: Three Views
Comments
MOST POPULAR IN Israel Diary
Our privacy policy