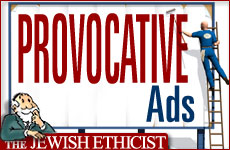 We may be used to them, but provocative ads are spiritually harmful.

A. Advertising is probably as old as commerce, but today it has reached unprecedented scale; hundreds of millions of dollars are spent each year on advertising. Ads are a form of persuasion, but relatively few ads involve persuasion in the usual sense: presenting information that will bring a person to the realization that a particular product will benefit him and is worth the price. Most advertising operates at the level of imagination, rather than reasoning; the object is to create an instinctive attraction in the mind of the potential customer rather than to stimulate a rational process of conviction.

Since the imagination of men in particular is easily drawn to images of women, a very widespread advertising device is to arouse the imagination of men in this way. Sometimes this may involve images that are immodest per se; many could be characterized as indecent exposure. But the degree of exposure and the degree of provocation are not always the same; the focus of the question is the idea of provocation. (The same phenomenon exists to a much lesser extent with ads directed at women, and the same analysis applies.)

These ads are considered acceptable in modern society because imagination is considered something harmless. Fantasizing about forbidden activities is generally considered benign as long as it is not translated into action. Jewish tradition does not agree with this approach. Judaism attributes great power to the imagination, and imagining a transgression is comparable in many ways to committing one.

The Talmud teaches, "Contemplation of transgression is worse than transgression". (1) Specifically regarding looking at women, we learn: "The sight of a woman is better than the actual act." (2) The meaning is not that it is better ethically, but rather that it brings more psychic satisfaction and thus is in a way worse.

This seemingly counterintuitive result is understandable if we understand the essence of transgression. Transgressions of an interpersonal nature – theft, gossip, and so on – are forbidden because of their harmful effect on someone else. Those of a personal nature are forbidden because of their effects on ourselves. The very reason that the Torah forbids seemingly harmless acts, from forbidden relations to forbidden foods, is that they harm the soul. From this point of view, contemplating a transgression without performing could have even a worse impact that performing it without paying attention, for example eating forbidden food by mistake.

This is particularly true in the area of romantic attraction. This faculty is one of the most powerful faculties we have, and its power for spiritual good and harm are unique.

This idea can be illustrated by a close powerful analogy. Man has a powerful instinct for violence. Advertisements could leverage this emotion also for the purpose of selling, but there is widespread public recognition that this is an emotion that we don't want to arouse for the mere purpose of pushing consumer products – it is too powerful and too dangerous once released. Jewish tradition would adopt the parallel position regarding advertisements that leverage the emotion of romantic attraction.

The Jewish Ethicist: The Ownership Society

The Jewish Ethicist - Saving for Your Children

The Jewish Ethicist: Failing the Grade
G-d Time
Shavuot is The Holiday of Cheesecake and Blintzes
What Does Kosher Mean Literally?
Comments
MOST POPULAR IN Current Issues
Our privacy policy