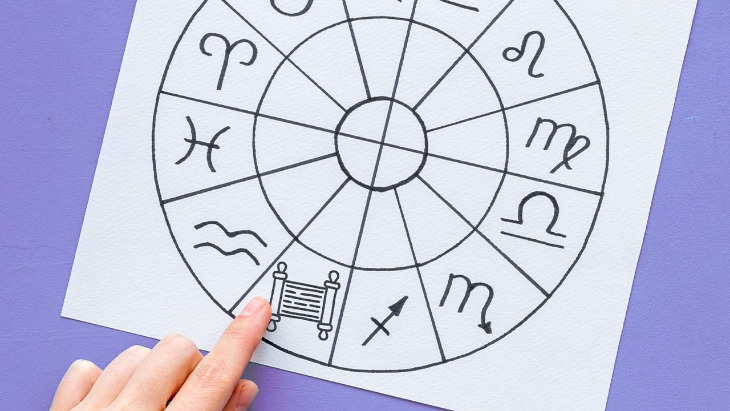 How I stopped looking to the future and learned to make the most of now.

Born into a chaotic tempest of a family, I had once looked to astrology to light a path through the storm. As I began to delve into Judaism, I wanted to understand the relationship between astrology, Judaism and divine providence.

On the one hand, Judaism affirms that God delegates to the constellations to carry out His will: “He counts the number of the stars; He gives them all their names” (Psalms 147:4). Rabbi David Kimchi, the medieval biblical commentator and philosopher known as the Radak, says that a “name” of a star refers to its function, that is, the way God uses the celestial body as a messenger to govern the universe.

The Talmud attests to the constellations’ influence on human personality. It tells the story of a man born with a prominent Mars who was encouraged to express his natural aggressive tendencies in a constructive manner by becoming a kosher butcher, circumciser, or surgeon (Babylonian Talmud, Shabbat 156a).

Yet there are prohibitions expressly forbidding us from consulting astrologers about the future. Our biblical prophets speak against diviners, soothsayers, and those who worship the stars as if they govern independently of God. Moreover, Jews are said to be “above the mazal (astrological sign),” liberated from the influence of the planets.

What is this superpower of which Jews were endowed, I wanted to know. What kind of kryptonite do we possess, allowing us to ward off the influence of the heavenly bodies whose rotation God invests with such profound powers? How could Jews escape the constellations’ influence when they too dwell under the heavens along with the rest of humanity?

Puzzling over this dilemma, I realized Jews can be freed from mazal, or fate, by going against their nature, by choosing to perform acts of goodness, as defined by the Torah’s commandments. How does this work?

Each of the elements has a positive and negative expression, weaknesses and strengths.

Astrology posits that each of us is made up of a unique combination of the basic elements of fire, air, earth, and water. Like everything in God’s creation, each of these elements has a positive and negative expression, weaknesses and strengths.

Thus, fire is full of warmth, energy and enthusiasm, but can break out and destroy. Air is stimulating and flexible, but can be flighty and unreliable. Earth is solid, traditional and dependable, but can be prone to lethargy, materialism and sensuality. And water can flow with empathic feeling, yet brood and despair.

The arrangement of the planets at the precise moment we emerge into the world at birth imprints these secrets of our souls. That inheritance – our cosmic DNA, if you will – reflects our nature.

However, the mitzvot, the wise and compassionate instructions of an infinite, loving Creator, allow us to choose to go against our instincts (and their inevitable consequences). Greeting everyone with a smile as we are expected to do, despite having the taciturn Capricorn on the cusp of our first house, for example – breeding a natural reserve – we can merit receiving the warmth from others that might not have been offered, had we exhibited our typical frown.

According to the Talmud, we are not judged in comparison to others, but rather, against our own potential.

With a preponderance of air signs, we might find that juicy piece of gossip nearly irresistible to pass on. Yet when we resist, we identify most meaningfully with our humanity using our free choice, and shape our characters in accordance with our pure souls.

Weighed down by many planets in earth signs, we may find getting up early for prayers every day as hard as Sisyphus pushing that boulder up the hill. Yet when we compel ourselves to do it anyway, out of a desire to connect to God and grow, we are essentially freeing ourselves from our mazal, becoming worthy of entirely new blessings. The person who acts with alacrity in a resourceful, kind, and ethical manner refashions her soul, earning her relationship to Heavenly grace.

According to the Talmud, we are not judged in comparison to others, but rather, against our own potential, which only God can know (Babylonian Talmud, Rosh Hashanah 16a). Thus, the person for whom getting out of bed early for prayers is like moving a mountain earns more merit for doing so than the person whose nature allows him to spring out of bed in the morning like Tigger, Winnie the Pooh’s sidekick. And the person for whom resisting gossip is like turning down a sweepstakes win earns more merit for doing so than the naturally circumspect individual.

Judaism shows us a path to confront our unique battles and to cultivate the sublimity of character of the homegrown saint. Within its discipline, Judaism enables us to find our very freedom.

Miranda Portnoy lives in Jerusalem with her husband and children. She found God in the midst of extraordinary challenges, and her greatest desire is to help other Jews do the same. Her newly published memoir, Making Meaning Out of Madness: A Jewish Journey, a wry, gritty account of her courageous climb out of Jewish family dysfunction to the redemption she finds within traditional Judaism, can be found here: https://www.amazon.com/Making-Meaning-Out-Madness-Journey/dp/1647188806/friendsofaishhat. Connect with Miranda at https://mirandaportnoy.com/.

One Drink Too Many: My Journey to Letting Go of Alcohol, Finding Freedom and Choosing Happiness
The Jewish Trader called “One Tongue” by Native Americans
Who was Two-Gun Cohen?
Why Really Everyone Believes in Free Will
Should Jews Support Ukraine?
The Jews of Cuba
Comments
MOST POPULAR IN Personal Growth
Our privacy policy