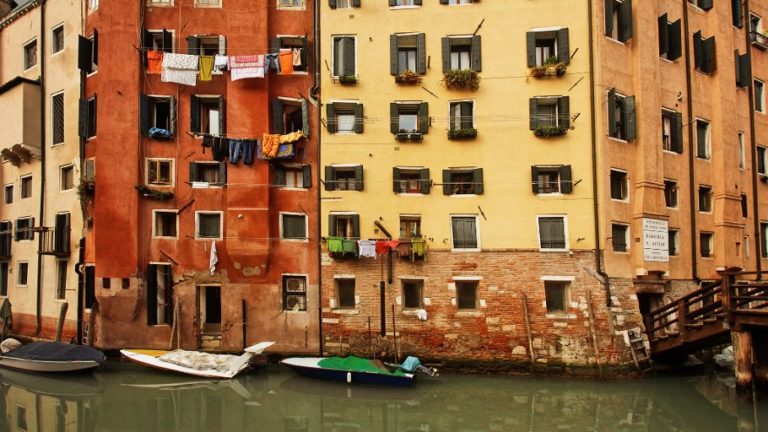 Confined to a tiny island, Venice’s Jews put on magnificent Purim shows for the whole city.

On March 29, 1516, the Government of the city-state of Venice issued a new decree: henceforth all Jews must be confined to a small, polluted island within the city. The foul-smelling island was the former site of Venice’s foundries, or “ghettos”. The island was known as the Ghetto, and gave us this word’s meaning.

Nearly a thousand Jews moved to the island. Iron gates were erected at the entrances and the Jews were forced to pay for guards to make sure no Jews escaped. Jews were allowed out only during certain daylight hours; at night the drawbridges connecting the Ghetto were raised. Jewish homes were not permitted to have windows looking outward; the only source of light for buildings in the Ghetto could be apertures facing inward towards the island.

Despite these incredibly harsh rules, Jewish life flourished. Within a century, about 5,000 Jews called the Ghetto home. Unable to expand beyond the roughly seven acres that made up the Ghetto (and later, one other very small island nearby), the Jews began to build tall wooden buildings. Centuries before the invention of skyscrapers, Venice’s Jews build structures up to six stories to accommodate the thousands of residents in the overcrowded Jewish quarter. Forbidden from building synagogues, many of these tall buildings housed hidden synagogues on their top floors. Undetectable from the outside, many of these synagogues were among the most beautiful houses of worship in all of Venice, featuring ornate mosaics and woodworking, lavish paintings and exquisite gold and silver decorations. 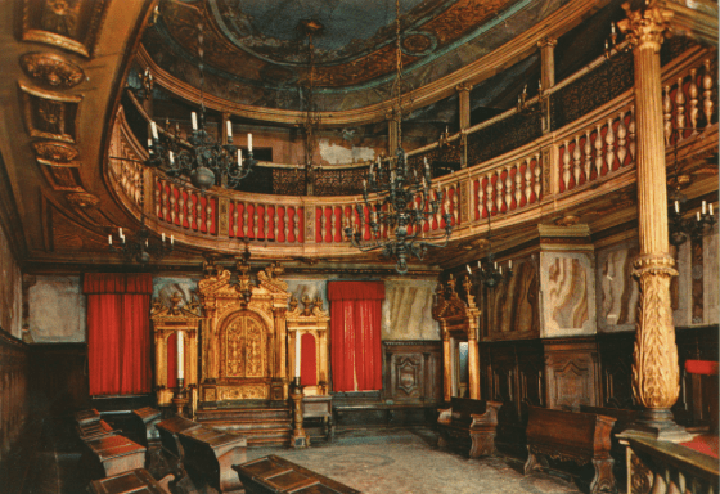 The German Synagogue in Venice Ghetto

Jews could only leave the Ghetto if they were wearing a yellow conical hat or other outlandish garb designed to provoke ridicule. They were barred from most professions, allowed to engage almost entirely in derided financial jobs such as lending and pawn broking.

Despite this, the Ghetto became one of Venice’s most popular places. The shops and nightlife of the Ghetto were popular with Venice’s Christian residents. Venetians entering the Ghetto were dazzled by the humming activity, the sheer numbers of people, and the beauty and style of the Ghetto’s people, buildings and business. Special guides, called senseri, directed visiting Venetians to the shops they wished to patronize. Most of these senseri were Christian, helping their co-religionists sample the beauty and goods of their city’s Jewish quarter.

Historian Garry Willis explains that in Renaissance Venice, “People with a taste for the exotic went to the Ghetto as fashionable people went to Harlem nightclubs in the 1930s.” Early British aristocrats who visited Italy as part of the “grand tour” that every wealthy young Englishman took of Europe recorded exploring the Ghetto as a vital element of any visit to Italy. Thomas Coryate visited Venice in 1611 and headed directly for the Jewish Ghetto, where he marveled at the bursting population of 6,000 on the small island.

The Venice Ghetto wasn’t only rich in culture and style; it soon became a major center of Jewish learning and piety. Venetian Jews were scrupulous in their observance of Jewish holidays. When Purim came around each spring, Venice’s Jews had some particularly unique traditions. 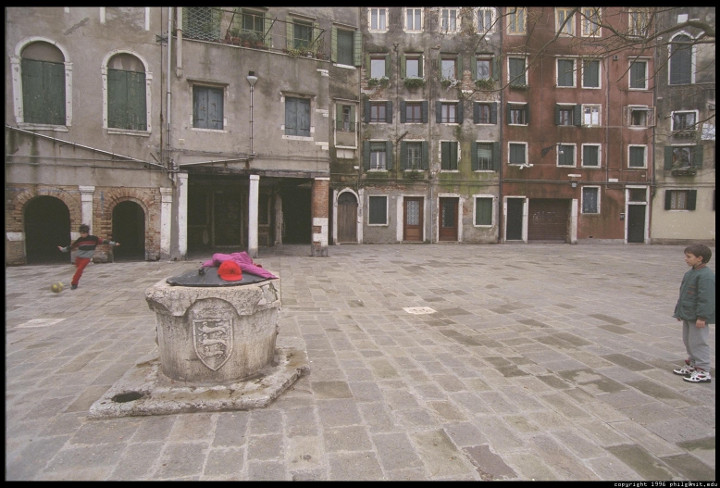 The day before Purim is the Fast of Esther that commemorates Esther’s and the Jewish people’s fast of three days before she went to visit the king and beg for mercy on her kingdom’s Jews. In Venice, Jewish women fasted for three days like Queen Esther; those who couldn’t manage to go without food and water for three whole days would eat or drink only tiny quantities in order to make it through the fast. 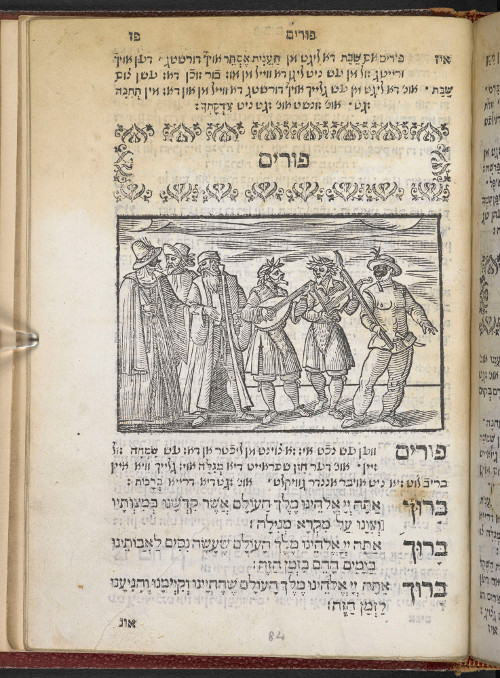 A woodcut revealing the vibrant culture of the Jewish community in Venice,
at a time when Jews could not openly practice their religion.

When Purim came, the entire Venetian Jewish community would put on a lavish Purim parade and reception. A jester rode on a horse or donkey, recalling the episode in the Book of Esther in which Mordechai rides in a grand procession on the king’s horse, led by Haman. One of the highlights of the day’s revelry was a grand Purim play, which drew not only crowds of Jewish spectators, but was a major cultural event for Venice’s non-Jewish citizens including non-Jews from distant places. Shockingly, Venice’s Jews, who were reviled and looked down upon by their Christian neighbors, were a major source of cultural enlightenment and entertainment.

No copies of Venetian Purim plays remain, but a Purim play from the nearby city of Mantua – which also had a Jewish quarter – survives and gives us a taste of what these Purim Shpiels (Purim plays) were like. The Mantua play was called Tsahot Bedihuta DeKidushin and was written in Hebrew. Its plot is based on a Talmudic story (Gittin 8b) involving a master and a slave.Jewish playwright Leone de Sommi (1525-1592) penned it, and it includes comedy, slapstick, cases of mistaken identity and disguises, and song.

Giulio Morosini was a non-Jew who hoped to convert Venice’s Jews to Christianity and he visited the Ghetto frequently. While he seems never to have been successful in convincing Jews to abandon their religion, his descriptions of the Ghetto provide a vivid lens into what Purim there looked like in the 1600s.

At a time when women had few rights in Christian society, Morosini was shocked at the equal roles that Jewish women enjoyed in celebrating Purim:

Now let us look at another celebration at Purim, held outside the synagogue with rejoicing and festivities. The young please play at Bullfighting, using oxen and other animals, and in the evening married and unmarried women don masks and go visiting their friends and relatives, where they dine and dance.

The Jews’ Purim masks were similar to the famous Venetian masks that residents of that city came to wear during balls and during the Christian carnival festival – yet they seem to have predated them. Historians aren’t sure exactly where the Venetian custom of wearing masks came from, but the thriving Jewish community in its midst, which donned masks for Purim since at least the 1400s, is one possible source. 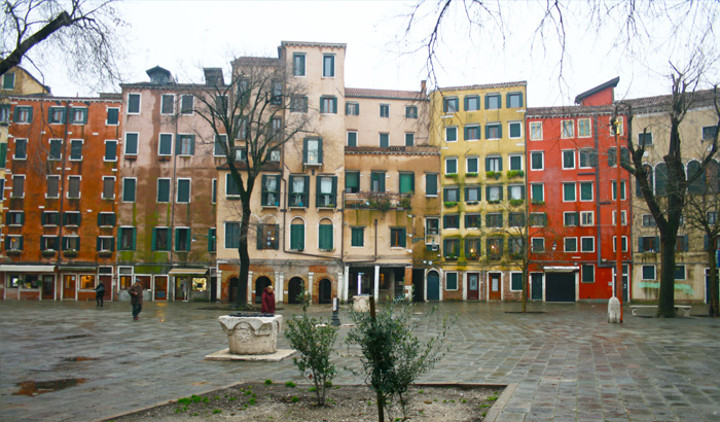 By 1797, war and disease had shrunk the Ghetto’s Jewish population to about 3,000. That year, Napoleon captured Venice and extended equal political rights to all. His soldiers tore down the walls of the Ghetto. In the years that followed, many Jews left the Ghetto, prospering in other areas of the city and abroad. The over 200-year tradition of holding glittering Purim celebrations for both Jewish and non-Jewish citizens alike came to an end.

Jews continue to put on beautiful Purim plays in Italy and elsewhere to this day. But the unique spectacle of the gilded cage that was Venice’s Ghetto – a virtual prison for Jews to which non-Jews flocked – is no more.

Israel & FDR’s Secret Correspondence with the Saudi King
It Takes A Lot Of Faith To Be An Atheist
How Instagram Brought Back This Nostalgic Soup
What Makes Eli Run?
Comments
MOST POPULAR IN Israel
Our privacy policy