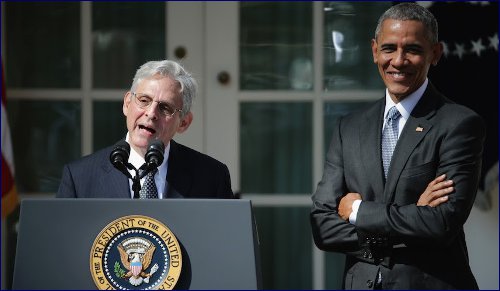 Judge Merrick Garland gave an emotional tribute to his Jewish grandparents who paved the path that enabled him to reach this milestone.

When asked to name what has made him most proud in life, Judge Merrick Garland had a great deal to choose from.

He might have mentioned his two Harvard degrees or his clerkship for U.S. Supreme Court Justice William Brennan. Judge Garland might have recalled his distinguished career in the US Justice Department, overseeing the prosecution of Oklahoma City bomber Timothy McVeigh and Ted Kaczynski (the “Unabomber”) or his years as Chief Justice for the U.S. Court of Appeals in the District of Columbia.

Yet on what the judge called one of the proudest days of his life, he recalled a very different set of achievements. After President Obama announced Judge Merrick’s nomination to the U.S. Supreme Court, Judge Garland stood before the nation, flanked by the President and Vice President of the United States, beamed live from the White House’s Rose Garden around the world, and spoke emotionally, at times with tears in his eyes, about his Jewish ancestors and their struggles.

Born to a Jewish mother and father, Garland was raised as a Jew. He recalled his grandparents who fled anti-Semitism in Russia a century ago, leaving the Pale of Settlement (specially sanctioned areas where Jews were required to live) and described how they sought a new life in America for their children. “My family deserves much of the credit for the path that led me here,” Judge Garland explained.

He also credited his father, Cyril, who was born in Omaha, and whose family also left anti-Semitism behind in Latvia, for teaching the “importance of hard work and fair dealing.” His mother Shirley, the judge told the nation, taught him the value of community service; she formerly worked as the director of volunteer services for the Council for Jewish Elderly in Chicago.

Having honored his grandparents and parents, Judge Garland turned to his own nuclear family. Being nominated for the Supreme Court “is the greatest honor of my life” Garland explained, other than his wife Lynn agreeing to marry him 28 years ago. His nomination to the highest court is the “greatest gift” he’s ever received, Garland said, except for the births of his two daughters.

Judge Garland’s heartfelt speech in the Rose Garden is a reminder to stop and think of what it is we are living for and to consider the values we most treasure and want to pass on.

Few of us are ever forced to stop and sum up what it is that we are most proud of in our lives and to consider everything that had to happen in order for you to arrive at this moment. What would we say? What did your parents, grandparents and great-grandparents go through in order to give you the opportunities you have in your life? Think about this and share with your family.