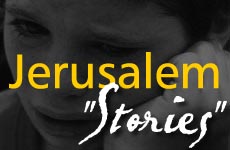 A woman spends a week in Israel visiting victims of terror and their families.

Last month I had a rare opportunity. I joined a group of individuals who traveled to Jerusalem for one week to interview victims of the suicide bombings. We wanted to fulfill the Jewish precept of "visiting the sick," and to return with stories so that our community could better understand the reality of life for those under constant threat of terror attack. 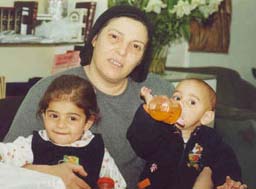 Elana Danino with her grandchildren

I soon found myself in the tiny apartment of a woman named Elana Danino. She had not been properly informed in advance of the purpose of our visit. "I'm not a 'story'," she quietly asserted. "If you want stories, go to the library."

Elana, a devout mother of 10 children, is unable to live in her apartment because memories of her son permeate the flat.

She had agreed to our visit only because she had been under the mistaken impression that we'd come to donate money for a Torah scroll she is having written in memory of her teenage son, Yakov, who had been murdered five months ago.

Elana, a devout mother of 10 children, is unable to live in her apartment because memories of her son permeate the flat. In the course of a two-hour visit I learned that one surviving son wants to move out of the country so that he can sleep at night. A daughter, who lost a close friend in addition to her brother, has suggested that remaining family members blow themselves up in order to spare themselves further tragedy. I also learned that Yakov would rush home from synagogue on Friday evenings, stand at attention and salute his mother, awaiting "orders" to assist with dinner preparations. And that Yakov loved to make salads. And I learned that Elana has chosen to endure the painful memories dredged up by my visit only because she is devoted to the task of memorializing her son's life. 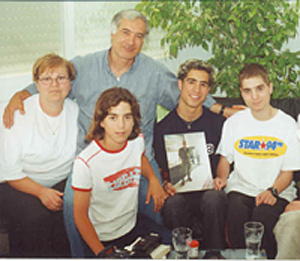 From right to left: Eran, his twin brother Avi, holding a photo of an older brother currently in the army, with Elan and their parents.

The next day I met Eran and Avi, twins who had been celebrating their 16th birthday with a group of friends last December when a suicide bomber exploded in the heart of downtown Jerusalem. Avi had called his parents from the ambulance. He was hurt; he didn't know where his brother was. Their father, Rafi, described the next few agonizing hours -- mobilizing relatives, the frantic search from hospital to hospital trying to locate his son. Officials gently suggesting that he try Abu Khabir -- the morgue. Someone finally thought to call Eran's cell phone number. An aunt dialed; no response. She suddenly realized that she had neglected to press "send." A cousin re-dialed and the phone was answered by a nurse who said that Eran was alive. Barely.

A nurse answered the cell phone and said that Eran was alive. Barely.

The six metal bolts that were removed from Eran's head sit in a specimen cup on the coffee table next to the cookies and cold drinks. The container is heavier than I expected. As their father talks, I notice that Avi takes hold of Eran's hand. Although he did not lose his brother, Eran is not the same boy he once was. He has only recently begun to regain his speech and his ability to walk. He has limited short-term memory. Eran's parents no longer work, as they are devoted full time to his care.

At one point Rafi mentions his decision to allow the boys to go downtown that night. He didn't want them to leave the house. "But Abba, it's our birthday!" they pleaded. What was a father to do?

Decisions. Ostensibly simple, every day decisions that in this country can end up drastically changing the course of one's life. This is a part of the story that hits home because during my short visit I, too, am constantly making decisions. It's impossible to be in Jerusalem and not be thinking that a bomb, indeed a person, could suddenly explode beside you. Take a bus? No. Walk around? Yes. Only not to Ben Yehuda, where there have been several suicide bomb attacks in the last year. Jaffa Road? Not necessarily any safer, but I'll risk it. I didn't travel 6,000 miles to be a hermit. Ah, the illusion of control. If only I make the correct decision, I can ensure my safety. Or at least increase the odds.

The Israelis I talk to reveal their strategies: "I go to the supermarket at 8:00 a.m. because it's empty at that time." "I don't take my kids downtown anymore." Others are more defiant: "I go where I need to go." The chances of being caught in a terror attack are still relatively small. But horrifying nonetheless.

A few hours after meeting Avi and Eran, we meet Dana, who had been a guest at the twins' party. Her mother, a single woman whose daughter is her only family, weeps easily and often during our visit. Dana seems embarrassed, annoyed by her mother's display. Dana had been standing only five meters from the suicide bomber. Yet at the moment of the explosion, Dana's friend had been giving her a hug. She was shielded from the blast by his body, so that only the side of her face was exposed. Dana lost an eye and sustained injuries to her mouth. Her specimen cup contains the nail that had been lodged in her face. Her friend, Ido, was killed. In recalling his memory, Dana bursts into tears.

I had traveled to Jerusalem thinking that I would be collecting stories to share with our community. But Elana was right; the people who welcomed us into their homes are not "stories." That's the message I needed to learn, the most important one to bring back.

Sara Zimmerman is a psychologist in Toronto who spent a week in Israel visiting families through the One Family organization/Israel Emergency Solidarity Fund.

Netanel Felber's Message: Don't Give Up
Seeing Without Eyes
Why Shouldn’t We Eat Whatever We Want?
The Power Of Prayer
Comments
MOST POPULAR IN Israel
Our privacy policy
Aish.com Is Looking for Great Writers