The Hardest Lesson of All 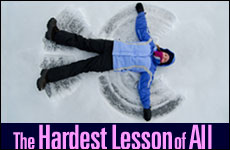 As my mom was dying, I caught a glimpse of just how special every moment of life is.

I was living in Los Angeles when I got the news that my mom (who was living in Montreal) was gravely ill. Her breast cancer had metastasized into the bones and central organs.

Considering the distance, my responsibilities to my family and my job, and the protracted nature of her illness, I worked out a plan to be with her as much as I could and kept in touch daily by phone.

Each morning, I would bundle the four oldest kids (they were ages 6-9 then) and drive them to school. On the way, I'd call my mom and put her on the speaker phone so all of us could chat with her. They would yell, "Hi Bubbie, we're going to school with Tattie," and invariably fight over who got to speak first. It kept us all connected, even though we were 2,500 miles apart.

I also hoped to show my children the respect and love I felt for my parents so that one day, when I became old and infirm, they would also show it to me.

Every two weeks, on Thursday evening, I would fly to Montreal and spend Shabbat with my mom (who was usually in the hospital) then fly back to LA on Sunday evening.

On one of those visits, I was sitting by her bed as she moved in and out of consciousness following an operation which determined that all hope was gone. I held her hand, caressed her forehead. Suddenly her hand jerked up into the air and started making small circles, round and round. She was working at something, trying to do accomplish a task, but I had no idea what. After a while, her hand relaxed and dropped to her side.

She slept. I sat.

Then she awoke and looked up at me. She looked bewildered and sad. "What happened?" I asked her. "What are you trying to do?" By then we had made it a habit of talking openly about her life and her approaching death. "I was trying to open the door." She said. "It wouldn't open. I didn't seem to have the right key."

"The next world. My mother and father were there and my sister also."

She said they told her to come to them, but she could not figure out how to open the door, and she was frustrated by this.

Perhaps if I just stayed there, never letting go of her hand, I could hold onto her forever.

I told her it was okay. I held her hand tight and told her that when she was ready she would figure it out.

I didn't want her to figure it out though. I didn't want to let go of her hand. I was afraid she would reach for the right key this time. Perhaps if I just stayed there, never letting go of her hand, I could hold onto her forever.

My intellectual self knew I could not, but my emotional self simply refused to accept it.

JOY IN THE SNOW

When I made the trip to Montreal, I would often take two of the kids with me.

One trip during the winter stands out especially. I had taken the two oldest boys, A.Y. age eight and Yakov age seven. Having been born and raised in LA, my kids had little experience with snow, and they were looking forward to this special treat.

We arrived at the hospital Thursday night; we would sleep there in order to spend all Shabbat with my mom. On Friday morning, the hoped-for snow arrived in abundance, and we watched it out of her seventh floor window accumulating down below. The boys, bored already by sitting around, were itching to make a snowman.

I suggested they go outside and play below my mom's window, out in front of the hospital where the main driveway snaked around a large island piled high with snow. Thrilled, they bundled up in their borrowed snowsuits and rushed outside, promising to play in the designated area only.

Meanwhile, I set up a chair by the window for my mom, so she could watch the kids frolic. They rolled in the snow and made angels with their hands and feet. All the while they kept their eyes on us, waving every few minutes, and attempting to throw us a snow ball. Invariably it would arc upwards and fall back on their head, provoking much laughter. Then they had a snow ball fight, and when they tired of that, they made a four-foot tall snowman, with some candies for the eyes and licorice for the mouth. They jumped up and down and danced with joy.

My mom and I were touched by their innocence. We sat there with tears in our eyes -- tears of joy, tears of gratitude for God's blessings to us, tears of knowing we would never sit together again, watching my children and her grandchildren frolic in the snow. A bond was created between us in that moment that still binds us today -- 13 years after her death. I remember and the tears flow anew.

I feel the pain of her loss now as fresh as that falling snow. The pain is as cold and stark. At times the pain envelops me in totality as the snow filled Montreal that day, falling nonstop, blanketing everything, bringing me to confront reality:

Only when we come to terms with death can we truly live.

We are all going to die. We all know it. Yet we seem to need to be close to death to really face that fact. In Judaism, we are taught that only when we come to terms with death can we truly live. Why is this so? Because only death brings with it the awareness of just how special every moment of life is. Without that awareness, we miss so much of life as it whizzes past us; without that awareness we miss the simple joys all around us, infusing each second of existence.

A MOMENT IN TIME

I remember another moment with my mom. I had rolled her wheelchair onto the balcony of my parent's home. We sat there together and a little blue jay flew by and landed on a tree. My mother, who was then in great pain and in the last days of her life said, "Look at the bird. It is beautiful!"

She smiled, even though pain coursed through her dying body. I felt her words. She had become wise. It was a simple phrase, but she said it with such conviction that I knew it meant a lot more. She had captured the awesomeness of existence.

The falling snow, the snowman, the kids playing, the bird on the branch. Life. Death. One. If only we weren't so busy with our plans and worries, we would see it all the time. My mother saw it. At the end of her life she lived with full awareness of those special little moments, and I was lucky enough to share that awareness with her. Her parting gift to me was a richer understanding of what unites us in life -- the oneness of God.

I think the most painful moment in my life was the first time I said Kaddish for her -- the prayer of mourning, which is, in fact, a song of praise to God.

After the funeral, when I stood up to lead the prayer service, the reality sunk in. She was gone. At that moment, I thought I would die from the pain. It just hurt so much. What is that pain? Is it her loss? Is it the realization that I too will die? That those kids who were making a snowman will one day be saying Kaddish for me? Is it knowing that I cannot sustain that keen awareness and am missing so many moments in my own life?

It is all this, and more.

And it is also simply this: I miss my mom. I used to call her every time something exciting happened. And now she just isn't there to call anymore.

I have yet to learn the hardest lesson of all.

How I Met Your Father
Blocked Goals and Anger
Why the Mezuzah is Placed on a Slant
Faith: the Axis Upon Which the Wheel of Science Turns
Comments
MOST POPULAR IN Family
Our privacy policy