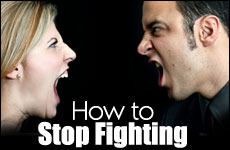 Four ways for couples to create an atmosphere of peace.

I settled into my window seat on the Jetblue flight and noticed that the two seats beside me remained vacant. The doors were ready to be closed and I welcomed the quiet time alone for the next few hours.

Just when I thought I had the entire row to myself, in walked a distinguished looking couple. Of course their seats were the ones I had happily thought of as my in-flight office space. They settled in and put their bags in order.

This won’t be too bad, I thought to myself.

As the flight attendants were giving their instructions the couple called everyone they knew with news of their departure.

“We’ll be staying in our vacation home for a month!” they said over and over.

We were told that all phones must be turned off but the husband just kept on making his calls as his wife put away her cell.

“You need to turn that off,” she said.

He ignored her and just kept on making his calls.

Finally, she grabbed the phone out of his hand.

“What did you do that for?” he hissed angrily.

And then the fighting began.

We forget all that we have to be grateful for and focus instead on what drives us crazy.

The next few hours all I heard was constant bickering. It didn't matter what it was about – everything sparked a fight: the flight attendant offering drinks, the wife's sandwiches, what they were reading.

As he was being served snacks, he turned to me and made a joke. "I’ve been married for 32 years and never won an argument. You know why? She never lets me get a word in.” He laughed at his clever words.

As soon as the flight attendant left, she told her husband that for 32 years she heard the same stupid joke and she’s sick and tired of it. “Why don’t you just shut your mouth for once?” she asked.

I wondered how on earth this couple would manage spending a month together in a vacation home and how their children must feel when they have family time.

I was reminded of a young mother who once confided to me that whenever she and her husband got into the car, their discussions often became heated. Their child was just an infant so they did not think much of it. The baby grew into a toddler but still, their car rides were often filled with arguments carried over from home. One day, their toddler put his hands over his ears and gave a shriek.

Husband and wife looked at each other, ashamed.

Creating an Atmosphere of Peace

Marriage is hard. We have dreams of living happily ever after as we stand beneath the chuppah, but life is filled with unknown challenges. We neglect to appreciate each other. We lose the sense of newness as days become months and months become years. As time passes, we fall into habits of squabbling and arguing; we undercut the love that we have for each other. Half the time we don’t even know what we were fighting about, we just know that we are not talking….again. We forget all that we have to be grateful for and focus instead on what drives us crazy.

Our children pick up on the constant undercurrent of conflict. Their sense of security and belonging is threatened.

Part of being a family is feeling loved and appreciated. When we spend time together, we want to know that we are part of a strong family unit; we enjoy each other’s company. Sure there are ups and downs, but bottom line is we are family. We want our children to treat each other with respect and live with loyalty to one another. Which parent does not feel aggravated when siblings constantly argue and put each other down?

One of the best ways for us to teach our children to cherish each other is by being a living example ourselves. There will be times that spouses disagree, have conflicts and differences of opinion. But then we must ask ourselves how we go about resolving our discord.

Do we put each other down? Are we sarcastic? Do we yell and scream? Are we open to listening and hearing the opinion of another? Do we disagree respectfully?

You may be thinking that this is impossible, part of an old idealized sitcom but not real for today’s family.

Not true. Peace is in our hands. Creating an atmosphere of shalom should be the goal of every couple. (Of course I am not speaking about an abusive or unhealthy relationship).

What can we do to build an atmosphere of dignity and respect in our homes?

Children often blame themselves for parent’s conflict. They also try to fix the situation and feel responsible for the fighting. Hostilities erode a child’s self-confidence and make him feel that he belongs to a ‘loser’ family.

If we do have a conflict of opinion, why must we put each other down? We have an opportunity to teach our children that we can love each other despite our differences. A child can learn that we can express our opinions without breaking up our family. Eliminate patterns of anger and sarcasm. If you feel that you are losing control, stop! Say that you need to take a breather. Go into another room or take a walk if you must. We do not have to turn each conflict into a major war zone.

It’s easy to say “I can’t control my temper; my parents never controlled themselves either.” That’s just a cop-out. There have been times that you have controlled yourself because you knew that you could not lose it in public or in front of your boss. Find that inner voice and use it. Ethics of the Father’s teaches: “Who is strong? He who subdues his personal inclinations.”

Often our children know about our conflicts but we neglect to show them our feelings of love for each other. Even if it’s just a warm smile or “I’m so happy you’re home”; we’ve made an impact. Children learn how to love from our example. Try to express gratitude to your spouse. Appreciate the little things that often go overlooked.

Our homes can become the greatest source of joy for us and for our children. We do not have to battle each other even if we disagree. The choice is ours.

5 Questions to Ask for a Happy Marriage

Marriage and Giving: Primer for Men

Learning from My Parents' Divorce

5 Ways to Keep Your Love Alive