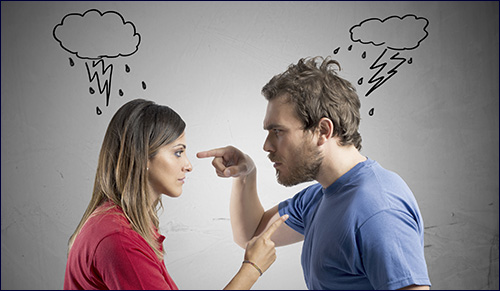 The latest studies on how to have a good fight.

Nobody enjoys arguments. Fighting with one’s spouse has been linked to a host of problems, from depression and obesity to poor health. One 2014 Danish study even found that frequent arguments can lead to a 50% – 100% higher mortality rate compared to those to those with a calmer home life. But not all fights are equally damaging; a three-year study in Britain found that while fights tend to make everybody in a family tense, constructive fights create less emotional turmoil for kids in the house.

Researchers studying ways to minimize or avoid fights have zeroed in on some surprising strategies. Here are five ways to help reduce arguments and manage disagreements before they spiral into fights.

Taking a time out is a common piece of advice given to people experiencing an argument. But recent research from the University of Michigan found that withdrawing from an argument by leaving the room was associated with higher rates of divorce.

Researchers at the University of Michigan’s Early Years of Marriage study tracked newly-married couples through their first 16 years of marriage. What they found sometimes went against prevailing wisdom: couples in which one or more spouses reacted to disagreements by leaving the room experienced higher rates of divorce than those who made the effort to stay and engage in conversation – even when those conversations turned stressful. Physically leaving the room was seen to be “particularly toxic”.

While time outs still have their place – if there is a risk of becoming violent, for instance – staying and engaging with our partners shows we’re committed to finding solutions together, and can help strengthen relationships.

2. Repeat what your spouse just said

Couples who argued felt better about their arguments – and their relationships overall – when they felt that their spouse empathized with their feelings. This was the conclusion of a recent Harvard study in conjunction with Bryn Mawr College.

Researchers asked couples to discuss topics they knew would be divisive, and videotaped the conversations. Afterwards, couples watching the videos felt better about their relationships when it was apparent their partner empathized with what they were saying. (This result was particularly strong for women.) The experience of knowing that our spouse is making an effort to understand where we are coming from is a powerful predictor of happiness – even when the source of our disagreements is still there.

Two thousand years ago the Jewish sage Rabbi Hillel recognized the power of empathy, advising “do not judge your fellow until you have reached his place” (Pirkei Avot 2:5). We can never truly know what another person is thinking, but – as modern research shows – making the effort to try brings us closer together. Sometimes all it takes is asking “is this what you’re saying?” or trying to put your spouse’s arguments into your own words to reassure others that, despite our differences, we truly care about them and what they are going through.

Marriage therapist and author Dr. John Gottman has videotaped thousands of couples engaging in conflict, and believes he has identified the single most destructive trait that can wreck a relationship, taking a disagreement and escalating it into a major fight: facial expressions that convey contempt.

Gestures such as eye-rolling, sneering, or passive-aggressive moves such as correcting a spouse’s grammar instead of responding to the essence of what they said is, according to Gottman, “the single best predictor of divorce” in a marriage. Such gestures of contempt are also, he claims “found…essentially zero in happy relationships.”

This echoes a key Jewish teaching. King Solomon, considered the wisest man who ever lived, realized that fights and negative attitudes have a way of escalating. “Iron sharpens iron; so one man sharpens another” (Proverbs 26:18). Just as iron implements become ever sharper through friction, so can our personal relationships, if we’re not careful. Contempt and ill feelings have a way of reinforcing themselves.

Smiling is one way to calm down an emotionally stressful situation – even when the smile you paste on your face is fake. Researchers at the University of Kansas found that when subjects forced themselves to smile – even if their smile was a forced – they experienced much lower levels of stress. Smiling was a way to calm down, release endorphins, and slow down heart rates.

Smiling can also have a profound effect on those around us, reassuring them and helping them to feel closer to us. The great Rabbi Shammai advised “receive everyone with a cheerful face” (Pirkei Avot 1:15). The way we look at people can affect their mood too. In fact, the founder of the Jewish “mussar” (ethical behavior) movement, Rabbi Yisrael Salanter, explained that our faces are not private property. The expressions we adopt have the power to reassure others and put them at their ease. Therefore we each have a responsibility to smile at others. Doing so can help calm a situation – and help us to connect with others.

People report feeling their spouses are less empathetic when a telephone is nearby – even if nobody is using it. That’s the result of one recent British study, which found that couples that surround themselves with electronics display lower levels of trust, empathy, and poorer quality of relationships. Couples who interact while in the vicinity of electronics such as cell phones experienced poorer quality conversations, and felt less connected and close to their spouses.

An ideal time to experiment with going electronic-free is Shabbat. If you not doing so already, plan a Shabbat dinner with your spouse, and as sundown approaches on Friday night, turning off your electronics. This sends the message that you’re wholly focused on them.

Going electronics-free is associated with higher levels of happiness and well-being. And the benefits go beyond building a stronger relationship. Those who turn off their gadgets on Shabbat report their electronics-free hours to be the happiest time they spend all week.

And lastly, save the big discussions for times when you’re relaxed, well-rested and not hungry to ensure you focus on real issues, not fatigue or hunger.

7 Ways to Keep Your Love Strong

Wait... They're Getting Divorced?!
Deep Breaths
What Happened to the Truth?
The Japanese Everything Bagel Spice Recipe
Comments
MOST POPULAR IN Family
Our privacy policy