How to Keep a First Date from Being the Last 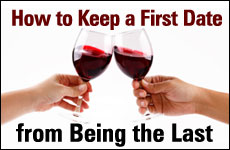 Six key points that every woman needs to know.

Let’s face it. Getting a first date is relatively easy – a guy spots you at a professional conference; he reads your profile in an online dating site; or a mutual friends sets you up on a blind date.

The trick is to get a second date. Our article, “6 Keys to a Great First Date,” prompted an outpouring of requests for a companion piece for women. So without further ado, here are six tips to help you keep that first date… from being the last.

(1) Give him a chance. How many times have you found yourself quickly deciding that the one you've been set up with is not "The One"? You look at his features, his haircut, the way he's dressed, the way he carries himself – and you think, "Uh oh." The sound of his voice and the first five minutes of conversation clinch it in record-setting time. "He's definitely not for me," you tell yourself, and the date is over before it's begun. It doesn't matter what he says or does now, because you aren't listening anymore. You're thinking about what to wear to work tomorrow… and how you're going to find a new guy to date.

It’s your loss. By making a quick, superficial evaluation, you've deprived yourself of the opportunity to get to know what this man is really like, to see beneath the surface and perhaps realize that he has a lot more going for him than you hurriedly judged him for.

Try turning this around. Instead of rushing to judgment, let go of any expectations you might have. Just keep it on the level of “I’m meeting a nice guy and will try to get to know him a bit, to see what he's like.” Stop thinking, "Is this the guy I'm going to marry?" Asking that question is the fastest way to keep yourself from wanting to ever see him again. After all, how could you think of marrying someone when you’re hyper-focused on one character trait or feature, and you don't know him as a person?

Experience has shown us that you'll never know that someone is right for you the first time you meet. Anyone who claims that they "knew right away” didn't really "know." True, they felt potential, but they still had to go on more dates to see if their instincts were right. And the majority of now-married couples will confirm that they had absolutely no idea what would come of their so-so first date with their spouse. The key was that they asked themselves, "Can I go on one more date with this person?" and they didn't allow superficial reasons to stand in the way of saying, "Yes."

(2) Show your softer side. You've worked hard to get to where you are. You have a great job, maybe even a graduate degree, and you want your (eventual) husband to view you as an intelligent, capable woman. Great! But this isn't a job interview, and while it's fine to talk about the accomplishments you’re proud of, if you talk about them too much, you'll turn him off.

The traits that make you a great trial lawyer may not be the same that will make you a great wife and mother. In order for a man to appreciate all of you, you may need to do some serious introspection and see where you need to develop yourself personally, not just professionally.

He's looking for someone he can relate to emotionally as well as intellectually, not for a list of achievements. He wants to learn about your softer side, such as what you like to do for fun, your hobbies and talents, what makes you laugh, your tastes, and what's important to you in life. By showing all the different facets of yourself, he'll be able to see who you really are. And by you asking questions about his experiences, tastes and ideas, you'll show that you're interested in learning who he is, too.

(3) Don't chase him. Your first date went well, and you’re hoping he'll call to ask you out again. You wonder, "Should I text him to say what a nice time I had?" Bad idea. Even if he doesn't figure out that you're trying to coax him into asking for a second date, there's a good chance he'll feel intimidated that you, rather than he, made the next move. It doesn't matter that we live in an age of gender equality in many realms of life – when it comes to dating, men still need to feel they are the pursuer in a relationship. If you switch roles, it's likely to backfire.

If you want to tell a man that you enjoyed your time together, do so at the end of your date. You can simply say, "Thank you. I had a nice time." Leave out the superlatives, and by all means, don't tell him how much you like him. If you express your feelings without dating long enough to know if he feels the same, he's likely to feel very uncomfortable and decide not to continue dating. Keep those early feelings to yourself and watch the courtship develop. Be patient. Let him be the first to talk about his emotions.

(4) It's not a free meal. We'd like to believe that this scenario doesn't happen in the 21st century, but it does: A man takes a woman to a nice restaurant on their first date. She orders an expensive meal, possibly a few courses, but barely touches her food. "I can't eat so much at night," she explains, and asks the waiter for a doggy bag. From the start, she knew that she'd never say yes to a second date with this man, so she figures she may as well get a decent dinner (plus leftovers for the next night) out of the evening. Meanwhile, the poor guy – who began the evening hoping that this woman had potential – belatedly realizes he's been used as a meal ticket.

The Torah prohibits ginevat da'at, misleading another person. This includes going on a date for the sole purpose of having a nice meal at a man's expense. In addition, dating takes a big chunk out of most men's budgets, and women owe them some consideration for this. If you're not interested in going out with this man in the first place, don't waste his time and money. If you go on a date with good intentions and then realize he's not for you, be considerate of his wallet, at the same time that you try to make the best of the evening. He may still be decent company, and either of you may ultimately decide to set the other up with a friend who's more suitable.

(5) Look your best. Most women don't need tips on basic grooming and dressing. They know not to show up on a date in clothes that are dirty, stained or torn. But they may also need a visit from the wardrobe police. Sometimes, a woman whose feeling a little burned out, or not that positive about herself at the moment, will decide she doesn't have to put an effort into her appearance for a date. She might skip the make-up she usually wears, or not care what outfit she throws together, figuring either that her date won't care or that it won't make much difference in the outcome.

Most of the time, he will care. He wants to feel that he's important enough for you to want to make a good impression, and he may lose enthusiasm if he thinks you feel differently.

But let's say he didn't notice you're not your usual nicely put-together self. Your choices can still have a negative impact on the success of your date. To begin with, a woman's attitude often reflects how comfortable she feels about her appearance, and if you don't feel good about how you look you may project that negativity to your dating partner. You won't have the same experience if you’d felt better about yourself. In addition, men tend to be much more visual than women. A few finishing touches may help him feel more attracted to you, and that may encourage him to want to get to know you better.

Of course, if you feel so negatively about going out, it may be a good idea to skip the date altogether. If you're feeling ill, exhausted, or down in the dumps, there's a good chance the date won't go that well. Why not explain this to the man and ask to reschedule?

If you're so burned out that you'll feel unenthusiastic about dating in general, it's a good time to take a "dating vacation" for a month or two and focus on doing things you enjoy so you can return to the dating scene feeling refreshed and optimistic.

(6) Smile. Imagine being on a date with a man who never smiles at you. How would that make you feel? Time and time again, we've heard men tell us, "The woman I dated didn't smile the entire time. I felt so uncomfortable that all I wanted to do was end the evening." You might have had a hard day at work, are feeling stressed about something, or disappointed that the man you've just met didn't live up to your expectations. But there's no reason you have to express that openly with a frown.

There's A Lot More Broken Fish in the Sea: A Letter to My Fellow Singles
Korach 5782: Visit to Lift the Spirit
That Time The Ivy League Found A Way To Limit Jewish Enrollment
Would You Rather Be Right or Happy?
Comments
MOST POPULAR IN Dating
Our privacy policy