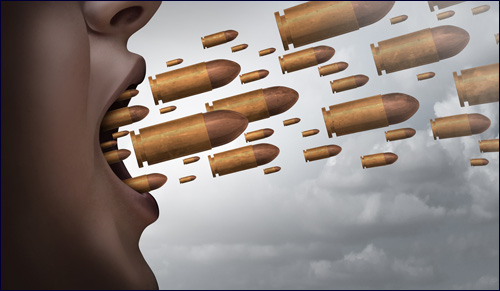 My neighbor accused me of being a thief.

There was a loud pounding on my door last Shabbos morning. I opened it to find my neighbor standing there. “Chaya” he said, (in the past few weeks, he has also called me Menucha and Ahava) “you stole our garbage can. Please return it immediately after Shabbos.”

I apologized and of course promised to do as requested. But when I shut the door, I was a little shaken and dumbfounded. Why had he been so aggressive? Why had he used the word “stolen”? Did he really think that we were in the business of stealing garbage cans? Was he making a joke? Was he as handicapped with proper words for “took by mistake” as he was with my name?

I was taken aback and it made me think, yet again, about the power of the words we use.

If he had said to me: “I think you took one of our garbage cans by mistake” (which is of course what happened) I would have responded in the same way – with a sincere apology and a promise to return it as soon as possible – but I wouldn’t have felt assaulted and accused of a crime!

The words we choose to use make a difference – in how we see the world, in how we see other people and in how others see us. Do we use positive words or negative words, kind ones or cruel ones? They may be the stuff of small, almost irrelevant interactions, and yet they make a big difference.

I was at a sports event a while ago and the language of the person sitting behind me also felt like an assault. It wasn’t directed at me and it wasn’t even meant in a hostile way – yet her conversation was peppered with vulgarities and what used to be known as “curse words.” (Am I marking myself as old-fashioned? If so, I don’t mind.) I could tell she didn’t even think about it; it was just her way of speaking. But it was negative and harsh and affected the tone of the conversation – and the atmosphere around her.

We aren’t as careful as we should be with the words we use. We often don’t think if they are hurtful or unrefined or insensitive or undignified.

I don’t think my neighbor meant to offend me or trouble me. He may have even thought he was making a joke. But I didn’t laugh and it really threw off my morning. It made me think that perhaps I have unintentionally done the same to others and it reminded me yet again that the words we use make an impact – every single one.

The next question is should I let him know that my name is actually Emuna?

Shavuot and Commencement
Grilled Israeli Lamb and Veggie Kabobs Recipe
Pain is a Reality; Suffering is a Choice
The Promise Of The Land
Comments
MOST POPULAR IN Mom with a View
Our privacy policy