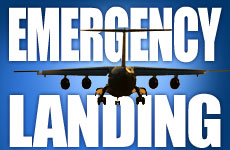 The plane plummeted downwards, oxygen masks dropped, and we thought this was the end.

Last Thursday, my husband, Moshe, and I arrived at Ben-Gurion airport with our two little ones, Aryeh and Libby, in tow. It had been a stressful day; packing, making food for the plane and scrubbing our Jerusalem apartment spotlessly clean for our summer tenants. I tried to keep my composure, but I eventually snapped and was shouting at everyone. All I wanted was to get on the plane and be in England with our family already.

After an hour's delay we boarded the plane. I was sure the children would fall straight to sleep and was eagerly anticipating catching up on some much needed rest of my own during the five hour flight. As they say: man plans and God laughs.

Oxygen masks shot down from above as our aircraft began to suddenly plummet downwards.

Two hours into the flight, the seatbelt signs went on. For a bumpy half hour the plane shook with turbulence. Without warning, the pilot suddenly announced, "Emergency landing!" The alarmed crew raced at full speed down the aisle, oxygen masks shot down from above, a loud distress signal blared a steady, shrill beep and the engines roared as our aircraft began to suddenly plummet downwards.

A rush of adrenaline surged through my body as I tried to fix my mask around my head. Libby screamed in hysteria as I attempted to place the mask over her face. She fought ferociously to remove the terrifying mask. I pulled the flimsy elastic as tight as it would go but she refused to allow the obtrusive object anywhere near her.

Our son Aryeh woke up to frightening screams and a huge mask being shoved onto his face. He was half asleep, disorientated, and scared out of his wits. With unbelievable strength he pushed the mask away, buried his face into my side and kicked and lashed his arms about, screaming a high-pitched, blood-curdling scream.

"Everyone's wearing this mask, my tzaddik," my husband said to him gently. "Look! Daddy's wearing the mask too!" But his petrified shrieking only continued to increase in intensity.

Knowing that time was of the essence, Moshe forcefully pinned him down and tried to glue the oxygen mask onto Aryeh's face. That also proved to be near impossible.

"You have to put your mask on Aryeh!" I pleaded with him. "The pilot says we all have to! Mummy's here sweetheart. Please put it on!"

For a few seconds here and there we managed to forcefully press the mask on him, allowing him to gasp a few strangled gulps of air, but he fought every moment. While helping to hold Aryeh down, I attempted to keep my own mask in place, at the same time trying in vain to restrain my daughter's hands from pulling off her mask and struggling to force her into a sitting position and to stop the flailing and jerking. Some things simply require more than one pair of hands!

As the plane continued to make its thunderous descent my husband and I prayed with a level of intensity we had never felt before.

"Please God! Protect my family! Protect my children!" The sounds of adults praying and weeping filled the plane and the deafening sounds of children screaming pierced through me. This can't be it! I thought to myself. It can't be we're about to die! They're only babies! I wept as I clutched on to my wailing children.

"Jodie! Say the Shema!" my husband shouted. This is it! I thought to myself as the plane continued to nose-dive. This really is the end. My body shook with fear as I fervently repeated "Shema Yisrael Hashem Elokainu Hashem Echad!" over and over and over again. Horrifying images of crashing into the sea and being trapped inside a huge metal cage flashed before my mind. I saw Moshe passionately pounding his chest as he recited the viduy prayer of confession one says on Yom Kippur and before one is about to die. He looked over to me with tear-filled eyes and called out, "Do teshuva!"

We're actually going to die! I realised in shock. I was so horrible to my family all morning! Why did I have to shout at the people I love the most? I turned to my husband, "I'm so sorry for shouting at you. Please forgive me!" I then prayed to God to forgive me for the mistakes that I had made, pleading with Him to give me a chance to correct them in my lifetime.

I clung onto my family, holding them tightly. "I love you with all my heart," I wept. "Please don't let us die God. Please! Save us!"

All of a sudden, the plane levelled off. The pilot told us there had been a cabin pressure problem, everything was okay now and we would be landing in Budapest in 20 minutes. Still clinging onto our loved ones, we shakily removed our masks and waited nervously to make our final decent. Thank God, the plane landed safely on the ground.

The next morning we boarded another plane, anxiously sitting in our seats, once again awaiting take-off. My husband turned to me. "I'm going to say Tefillat HaDerech (the traveller's prayer). Maybe I should ask the crew if I could announce it over the speaker for everyone to hear it?" he asked, slightly unsure.

"You have to!" I exclaimed.

After receiving the go ahead from the crew, he nervously walked to the front of the plane and took the microphone. In a voice filled with emotion he recited the Hebrew prayer: "May it be Your will... that You lead us toward peace, emplace our footsteps toward peace, guide us toward peace and make us reach our desired destination for life, gladness, and peace..."

Everyone resounded with a heartfelt "Amen!" followed by a round of applause.

Everyone resounded with a heartfelt "Amen!" followed by a round of applause. And with that, we began the last leg of our journey.

As the wheels touched the runway at Manchester Airport on Friday afternoon I understood that it was not only the pilot who safely returned us home. The Pilot of Pilots was in that driver's seat, guiding us in the right direction.

As I stepped off the plane, I thought in gratitude, I am alive! I have a life! I have a family! When our plane nosedived and I thought this was the end, I realised that in stressful situations I lose sight of life's bigger picture. So what if the chicken got burnt and smushed banana is on the wall? It may sound like a cliché, but what matters is not if everything is running smoothly, going the way that I want it to, but whether I am a good wife, a loving mother, a joyful, inspired me.

After running a branch of Aish HaTorah on Leeds University Campus in England, Jodie and her husband, together with their two children, now live in Jerusalem, where she continues to write and look after her children.

How to Speak to a Pregnant Woman