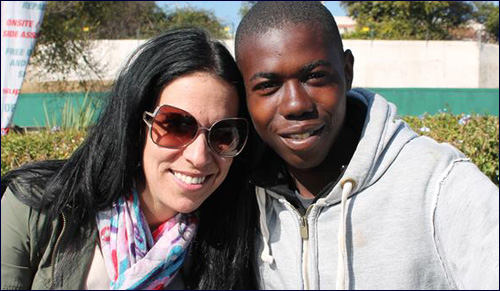 How one small act can set off a chain of kindness.

Pam Green was having a hard week. As she drove through one of Johannesburg's busiest sections, she was surrounded by the dozens of beggars. With an estimated 30% unemployment rate, begging at busy intersections is how many South Africans eke out their existence. And many people have become hardened to their plight after constantly being asked for money.

But one beggar named Joseph Phukubje stood out to Pam. He was holding up two pieces of paper – his high school diploma and his resume, and instead of asking for small change, he was asking for help in finding a job. As she peered in her rear view mirror something made Pam turn back, get out of her car and talk to him. 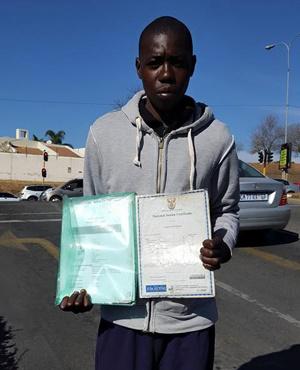 After hearing his story, Pam asked permission to post his information on her Facebook page. She shared the post with 20 friends hoping that one or two of them would be able to offer Joseph employment. Within hours the post had gone viral. Over a few days the post was shared over 20,000 times and Pam’s inbox was flooded with over a thousand job offers for Joseph, including offers for scholarships, training and clothing.

Yet the story does not end there. After helping Joseph to select the most suitable employer, Pam chose not forget about the plight of the homeless. Her social movement #SecondChances now aims to match each job offered with a homeless person looking for employment. Her email is already swamped with thousands of homeless people asking for jobs.

In a poverty-stricken South Africa rife with crime and corruption, the story about Joseph made headline news, momentarily piercing the class divide. Here are five inspiring lessons we can learn from Pam and Joseph.

1. Every person is a human being.

Joseph has a mother, sister and grandmother, even though he lost touch with them. Pam was able to see beyond the homeless man with drugged out eyes to see someone who wanted to create a better future for himself. She ignored the internal judgments that can cloud compassion.

2. Believing in someone is one of the greatest gifts you can give.

Joseph’s spirit was broken. When Pam asked him what his dream job was, he didn’t have one. His existence was one of survival; all he wanted was enough money to move from sleeping on the streets to renting a room and getting food for the day. Yet when someone offered him employment, treating him as a valuable person, his buried dreams came to the surface. He now plans on furthering his education.

Often people around us have suffered so much that they stop dreaming. They don’t believe there could be something better for their lives. They have no aspirations or goals. More than advice and money the most meaningful thing you can give them is to believe in the greatness of their soul and help them uncover their dormant dreams.

3. Don’t underestimate the ripple effect of our choices.

Pam had no idea how far her simple act would go. Every choice to do good – big or small –is valuable. It is easy to give up and think, What can I do? I’m just one person, I can’t change anything. Today it is clearer than ever that each of us is a link in the chain of humanity where kindness can take on a whole life of its own. Pam demonstrated how kindness perpetuates kindness.

4. All it takes is one person to care.

There is so much suffering around us. It is easy to get overwhelmed and think that nothing you do will have an impact. Yet if we each choose to reach out and be compassionate to the people we encounter, the world will be different. Just ask Joseph. One person can set off the wheels of change in motion and can inspire others to do their share.

5. Giving an opportunity to be self-sufficient is the highest form of giving.

Maimonides teaches that the highest form of charity is offering someone employment. Nobody likes being dependent on other people. We are all born with an innate desire to be productive, independent and creative. By enabling someone to find employment – with education, an actual job or skills – one can alter the future path of that individual. A job gives not only financial stability, it gives a sense of meaning and self-esteem as well.

5 Essential Ways to Make Room for Change and Move Forward

Who Can I Talk to about the Death of My Child?
It Takes A Lot Of Faith To Be An Atheist
How Instagram Brought Back This Nostalgic Soup
What Makes Eli Run?
Comments
MOST POPULAR IN Spirituality
Our privacy policy